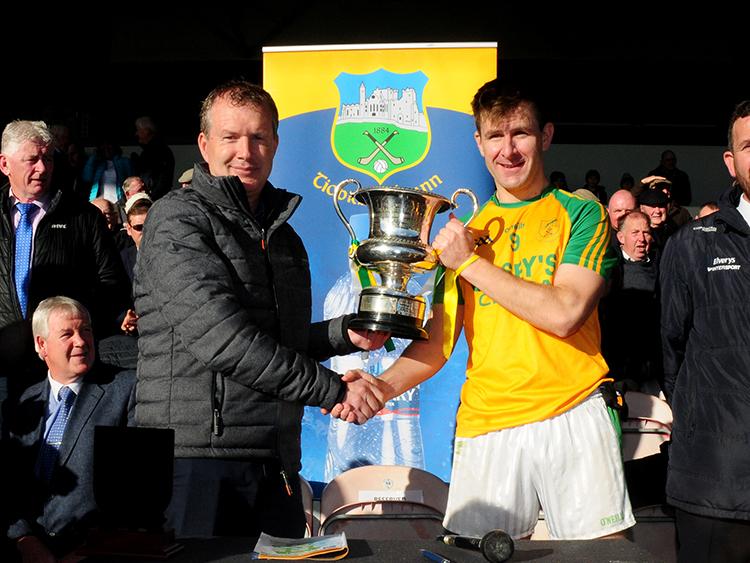 Five points down with time running out, Moyne-Templetuohy staged a heroic late rally to level in injury time and then went on to power their way to a victory over Golden-Kilfeacle in extra-time in a thrilling Tipperary Water County Intermediate Football Championship final played at Semple Stadium, Thurles on Sunday last.

And, the double bonus for the Mid lads is that their success qualifies them for a return to the senior ranks next year after a brief sojourn in the lower grade - and also a trip to Kerry to face the Kerry champions in the Munster club championship.

This was a fine contest all the way and there was never much between them, but at the end of the day Moyne-Templetuohy’s superior fitness was decisive as Golden-Kilfeacle once more found themselves on the losing end in their second final appearance in three years.

From the word go the sides went at it with an earnestness and honesty which was admirable and by the end of the first quarter they were sharing six points.

Golden were working extremely hard to close down their opponents with Jason Bergin driving the charge for Moyne who last triumphed at this grade in 2005 and who had seven of that team still donning the colours.

The second quarter was equally balanced and the break came with the sides level at 0-5 each - Ronan Hayes’ point for Golden bringing parity in injury time.

ALL TO PLAY FOR

It was all to play for then going into the second half, but the ball was most definitely in Golden’s court when Daithi Bargary netted for them in the 36th minute after a Josh Keane assist (1-6 to 0-6).

But Moyne showed their mettle - points from John Hassett (two) and Billy Kelly drew them level by the 50th minute to put the game very much in the melting pot.

Sean O'Halloran restored Golden’s lead in the 55th minute and then they appeared to have struck a decisive blow when in the 56th minute Niall Heffernan was grounded and Josh Keane tapped into the net after his penalty shot came back to him off the post.

Five points clear (2-8 to 0-9) with time running out it looked as though Golden’s name was on the trophy, but after John Hassett pointed in the 59th minute Louis Everard was in the right place to drive to the net when the ball rebounded off the woodwork.

With four minutes of added time signalled John Hassett crowned a fine individual performance by slotting over the levelling point from a free in the 63rd minute (1-11 to 2-8).

The momentum was with Moyne and perhaps the dismay at losing a winning lead in such dramatic fashion took its toll on Golden nerves, but it was the Mid men who proved strongest in extra-time.

In the opening ten minutes they out-pointed their rivals three to one to take a 1-14 to 2-9 lead.

Their advantage was similarly pronounced in the second period as they hit four points to Golden’s two leaving them winners by four points and to kick-start celebrations in the parish after their disappointment at the defeat of their juniors in the county final the previous day.

The Moyne-Templetuohy supporters piled on to the field at the finish to congratulate manager Phil Bowe, trainer Denis Kelly, selector Bill Morrissey and the back room team and the players on a great success for the parish. They had won it the hard way and perhaps it was all the sweeter for that with the contributions of Jason Bergin, the Hassetts (Tomas and John), the Meades (Tom and Pearse), Louis Everard, Joe O'Grady and Conor Bowe all hugely influential.

Special mention for the old-guard from the 2005 win - veteran goalie Joe Leahy, Odhran Lloyd, Louis Everard, Niall Russell, Cathal Ely, Ronan Ely and the Hassetts who are all still contributing big time to their club.

It was tough on Golden-Kilfeacle to taste defeat for a second time, but their day will surely come if they persevere. It was particularly galling to lose when they were so close to winning, but Daithi Bargary, Cian O'Connell, Sean Hayes, Shane Stapleton and Josh Keane tried very hard.