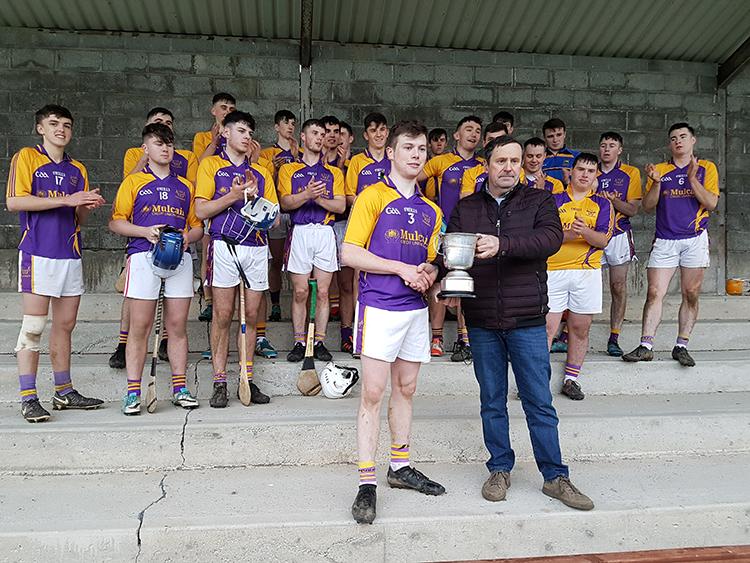 Newport captured the North Tipperary Under-21B Hurling Championship crown at Dolla on Saturday afternoon thanks to a comprehensive thirteen-point win over Borrisokane. Indeed, this Newport side looks well capable of making an impact in the county semi-finals given the quality of this display.

When amalgamated with Ballinahinch in 2014 a high percentage of these Newport lads featured in a county minor A hurling final defeat suffered at the hands of Moyle Rovers and their experience of competing at A level appeared to have a huge impact on this North under-21B decider. Physically and in terms of the speed of their decision-making Newport were well ahead of their Borrisokane counterparts on this occasion.

The vast majority, however, of the Borrisokane lads were off the age which suggests that the side managed by John Egan will have a big impact at the grade next season.

Newport, however, found heroes in every line with Cian Flanagan, Darragh Carroll, Corie Mooney and Colin Floyd in terrific form. Colin Floyd was the runaway candidate for the man of the match award, but spare a thought for corner-back Cathal Floyd. Cathal was presented with the unenviable task of marking Borrisokane danger man Jack Larkin and Floyd did an exceptional job on a talented opponent.

Newport played with a gale at their backs in the opening half, but Borrisokane battled gamely and trailed by just a point with seventeen minutes played (0-5 to 1-3). Jack Larkin drilled over three frees and Oisín Larkin notched two terrific points from play during their encouraging period. Indeed, Newport were grateful for the three-pointer which materialized in the sixth minute; Borrisokane enjoyed an opportunity to clear their lines, but Colin Floyd took full advantage of some dithering when he buried a left-hand shot.

Following a reasonably-even opening quarter Newport exacted a vice-like grip on the middle eight thereafter. And, the scores flowed as a result.

Between the 18th and 23rd minutes Newport fired 1-5 without reply to leave nine between the sides (2-8 to 0-5). Colin Floyd, Aaron O’Neill (a terrific effort), Thomas Floyd and Darragh Carroll (two, one free) helped themselves to the points while Colin Floyd buried a terrific second goal in the 21st minute.

Borrisokane needed a little encouragement and happened upon some good fortune in the 24th minute when Jack Larkin’s free dropped short and Oisín Larkin managed to divert the ball past a helpless Paul Hogan. Newport, however, pushed on and added efforts from Darragh Carroll (free) and Corie Mooney to lead by eight at the interval (2-10 to 1-5).

Immediately after the break Newport thundered into the challenges and were rewarded for their determined play in the 32nd minute when Kealan Floyd batted home their third goal.

Jack Larkin responded with a converted free for Borrisokane, but Newport were dominating the physical exchanges and playing the slicker hurling. And, Newport’s dominance was rewarded when Darragh Carroll (three frees), Corie Mooney (two) and Colin Floyd forced them sixteen points clear (3-16 to 1-6) entering the final quarter.

Borrisokane tried to conjure a response of note in the 46th minute when Liam Cleary’s terrific run created a goal-scoring opportunity for Oisín Larkin, but the corner-forward’s effort was blocked before Jason Quigley notched his side’s seventh point.

The sides traded efforts thereafter and from a Borrisokane point of view it was really encouraging to see the men draped in green push for late scores. And, Borrisokane were rewarded for their obstinate attitude in the 62nd minute when Oisín Larkin cracked home a superb goal off his left. That said Newport proved themselves the more accomplished side by some distance.