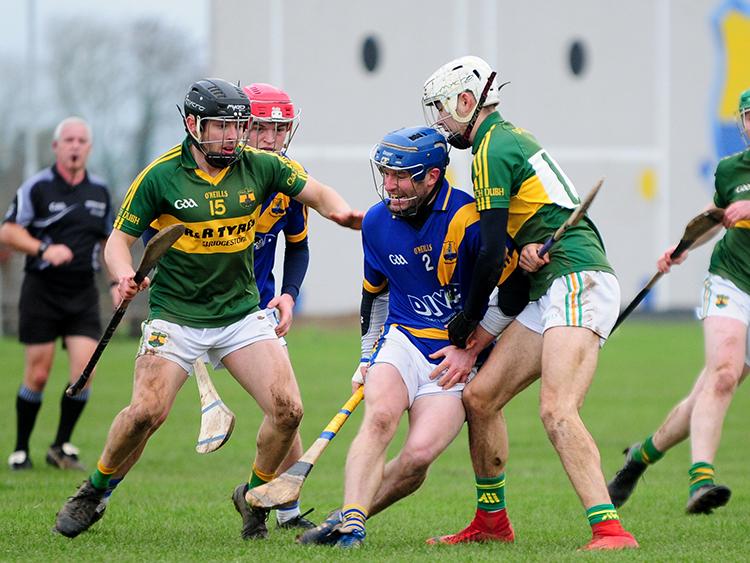 Given the strength of junior hurling in Cork it was never going to be easy for Boherlahan-Dualla to claim a place in the final even with home advantage to help them, but their ambitions were dealt a devastating blow in the opening fifteen minutes as they shipped 1-8 and from there to the finish they were chasing the game.

Boherlahan scored only one point during that initial spell (a Tossy Ryan free after four minutes) and while they did better approaching the break (with four more frees from Ryan) they were 1-10 to 0-5 adrift at the interval and not playing well enough to suggest they could redress the situation.

It was the worst possible start for Boherlahan as inside twenty seconds they were a goal behind when James Moynihan netted for the visitors. That score rattled Boherlahan whose defenders were subsequently struggling to contain the lively Cork attack and conceding frees in their efforts to do so, indiscretions that free-taker Brian Verling punished ruthlessly when notching five during that period.

Even allowing for the fact that Cloughduv had the backing of a fresh downfield breeze the interval deficit looked formidable for a team which had failed to score from play in the first half and never threatened the Cork goalkeeper.

But Boherlahan are nothing if not combative and they turned in a second half display which did them credit, but unfortunately came up somewhat short of what they needed.

The statistics will show that Boherlahan actually won the remaining three quarters of the game when out-scoring their rivals eleven points to eight, but the damage was done and Cloughduv battened down the hatches to make sure they did not relinquish their strong position.

Cloughduv had the first two points of the second half to be ten clear after thirty-eight minutes, but then came the Boherlahan rally which was spearheaded by Darragh Hickey who was now operating in attack.

During an eleven-minute spell (40th to 51st minute) they hit five unanswered points - Darragh Hickey notching three from frees with Colm O’Dwyer and William Hickey adding the others.

Five points behind (0-10 to 1-12) with nine minutes to go and the momentum with them, Boherlahan were very much in contention. Darragh Hickey was off target with a free to cut the lead further and a couple of stoppages for injuries took the steam out of the Boherlahan challenge which lost its impetus.

The Tipp champions badly needed a goal, but in those closing minutes Cloughduv regrouped and two points in a minute from Verling and Moynihan steadied a ship that was rocking and Liam Long added another as the hour mark approached.

Boherlahan had John O’Dwyer sidelined for a second yellow card on sixty minutes, but by then time was against them and the game was beyond the home side.

In the final analysis, four points from play over the hour was not going to gain a Munster final spot for Boherlahan-Dualla.

It was a disappointing end to what has been a great campaign by this team, but it should not be overlooked that they won the county title and regained intermediate status for the club.

Had they got off to a better start who knows how things would have gone, but this is a very good Cloughduv side - they are lively, have plenty of hurling and will take beating in the final.

Boherlahan-Dualla will now look to their B team, who are also county champions, for provincial honours as they will compete in the Limerick-organized unofficial championship at that grade.

It was Cloughduv’s day and they fully deserved their success. Having done the spade work early on, they were still good enough to pick off points against the wind enough to keep their noses comfortably clear of their rivals.