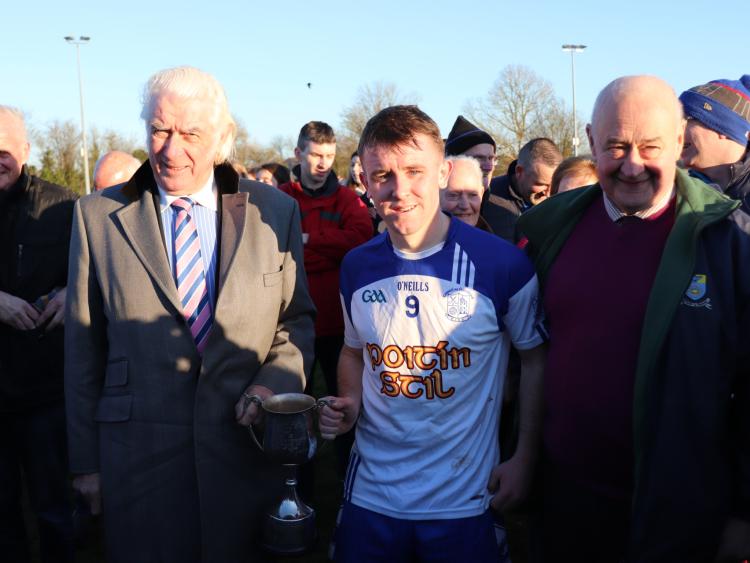 Cappawhite Gaels made it third time lucky as they claimed a first-ever Ollie's Bar West Tipperary Under-21B Hurling Championship title on Sunday last at a sunny Golden. Last year’s finalists went one better on this occasions as they accounted for the challenge of a highly-fancied Knockavilla-Donaskeigh Kickhams team.

Three years ago the sides met in the West minor B hurling final with Knockavilla-Donaskeigh Kickhams just shading it at the end.

Robbie Quirke made an immediate impact when firing over the game’s opening point after just forty seconds. The Gaels were in determined mood and Willie Barry added another before Ryan Renehan scored the first of his five points from a free.

Kickhams though soon retaliated in kind - first Devon Ryan opened their account and this was quickly followed by points from Padraig O’Carroll and Ger Browne. The sides were level at three a piece after seven minutes with five of the six scores coming from play.

Neither side was willing to back down and this led to a tough physical battle.

Willie Barry added two points from play and a placed ball to open up a four-point advantage. Frazer Allen was fouled and the referee signalled a penalty which was deflected on to the post by Kickhams' goalkeeper Aaron Browne.

Kickhams brought the gap back to a point with points from Devon Ryan (placed balls) and a second from Ger Browne. Any time Kickhams came back though Cappawhite Gaels had an answer. Tommy Coughlan gave them breathing space with his first and Ryan Renehan added his first from play.

Devon Ryan (free) and Willie Barry swapped points as the three points remained between the sides. Kickhams were now struggling to create clear cut chances with the Cappawhite Gaels defence not in a generous mood. Joe Griffey did get a chance which could have been a goal, but his shot just went over the crossbar.

With a quarter of an hour to go Cappawhite introduced Dara McCarthy and he made an immediate impact. His high delivery found Frazer Allen and saw the first green flag of the game. It was a crucial score that now put five points between the sides.

Devon Ryan pointed two frees either side of a long-range free from Ryan Renehan. Devon Ryan pointed a '65 with six and half minutes to play to again leave just three points between the sides. But the game's trend continued and Cappawhite finished strongest with further points from Willie Barry, Ryan Renehan and Colm O’Dwyer. Devon Ryan pointed a free before Nathan Ryan’s short free found Michael McCormack who found the net. It was mere consolation as Tommy Coughlan and Rian Doody rounded off the scoring. Cappawhite Gaels running out winners 1-21 to 1-16.

Best for Cappawhite Gaels were Philip Gantley and Ryan Renehan in defence while Colm O’Dwyer and Tommy Coughlan added points from midfield. Rian Doody put in a good shift of work while Robbie Quirke and Willie Barry were always a threat.

Kickhams were best served by Nathan Ryan at full-back, Kieran Breen and Eoin McCormack while Ger O’Dwyer worked hard in the forwards. Ger Browne scored some nice points at midfield, but was starved of possession when moved into full-forward. Devon Ryan finished with a tally of ten points with eight from placed balls.