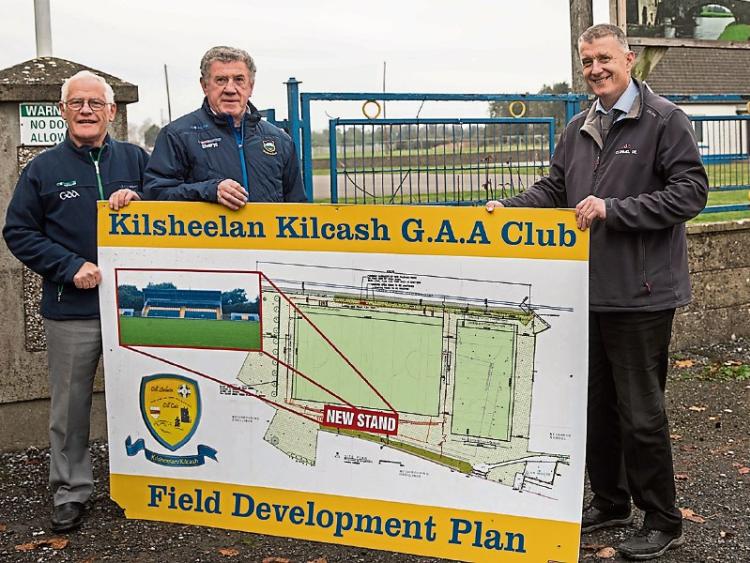 Kilsheelan GAA stalwarts Sean Nugent, Tommy Lonergan and Liam Stokes are among the driving forces behind the club's ambitious plans

Kilsheelan/Kilcash GAA Club in County Tipperary are undergoing a major transformation of their facilities involving an investment of €750,000, a massive voluntary effort within the club and the support of an appreciative community.

The ambitious project of developing their sports grounds located in  the most scenic of surroundings represents the biggest sporting development in the parish for over 70 years.

A strategic plan was drawn up in 2011 and the club are now in phase three of the plan and well on their way to meeting their  objective of providing a new main pitch, a new juvenile  pitch  and spectator seating.

Phase one involved the  purchase of land  and associated works required to allow for the main pitch to be moved westerly and into the new land.

Phase two involved the development of the new juvenile pitch to a high standard. This pitch was drained and reseeded in early September 2018 and will be available to play and train on in July 2019 for both adults and juveniles

Phase three involves the development of a full size main pitch which is scheduled to commence in July 2019, To be developed to a high standard drained and reseeded by early September. Erection of pitch surrounds dugouts and spectator seating and a stand and an electronic scoreboard is also envisaged at the end of this phase. This pitch is  to be ready for playing purposes by July 2020.

The project has been funded by generous donations from GAA supporters in the parish and by various fundraising efforts; Sports Capital funding from the National Lottery has been a vital ingredient while the support of two major sponsors has given huge confidence to the committee responsible for the development. GAA funding and local lotto funding are very much part of the financial plan also.

"The  development when completed will be hugely beneficial to the club its players and its members and will also have a positive impact on the G.A.A in general in Tipperary and surrounding areas. It is the clubs ambition once again to provide the very best facilities that we can for our children our grandchildren and the generations to come and to be able to celebrate that achievement when the club hits that century milestone in 2024," said club chairman David Power.

The development comes at a time when the club is experiencing unprecedented success on the field with representation on county teams growing every year.

This weekend the club will celebrate players who set the standards for those to follow when they gather to mark the team of 1968 who won the county senior football title .

A reunion for all those players of  1968  will take place on Friday December 14 in Nagles Kilsheelan.

The formidable team bridged a thirty five year gap and will always be held in high regard by everybody associated with the club.

Sunday, November 17, was the day of reckoning with Clonmel the venue and Ardfinnan the opponents.

As indicated above time has taken its toll and ten of that panel have passed to their eternal reward. May they Rest in Peace.