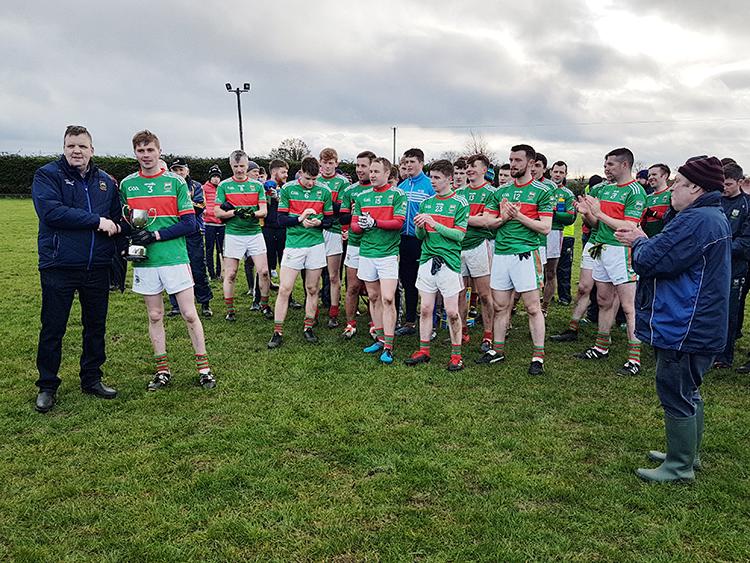 A Shane Hennessy penalty eight minutes into the second half propelled Loughmore-Castleiney to a narrow win over Moyne-Templetuohy, the county intermediate champions, in Sunday’s AIB Bank Mid Tipperary Intermediate Football Championship final which was played at Castleiney.

With such rivals pitted against one another this contest was always destined to be a close affair and so it proved. Indeed, the sides were level (0-4 apiece) at half-time and it took a dramatic swing of momentum to decide this final.

The crucial juncture materialised in the 37th minute. At one end of the field Moyne-Templetuohy carved their opponents’ defence open; Jason Bergin created a goal-scoring opportunity for Conor Bowe, but ‘keeper Richie Maher saved the youngster’s stinging shot. And, in the blink of eye Loughmore-Castleiney counter-attacked to devastating effect. Páraic Hennessy and Peter Nyland combined beautifully before Conor Ryan was hauled down for a penalty which Shane Hennessy stroked into the bottom left hand corner (1-5 to 0-5).

Moyne-Templetuohy did rouse themselves thereafter and threatened on occasion on reel their hosts in, but Loughmore-Castleiney benefitted greatly from the cushion afforded to them by Hennessy’s strike and were good value for this win.

Jason Bergin, Conor Bowe and John Hassett shone for Moyne-Templetuohy while Loughmore-Castleiney found heroes in Tom King, Conor Ryan, Páraic Hennessy and man of the match Ciarán McGrath who gave an exhibition of clever positioning and all round good sense.

Moyne-Templetuohy opted to go with a sweeper from the off (Tomás Hassett). Loughmore-Castleiney pushed up as best they could with defenders Mark Butler and Páraic Hennessy benefitting from the prevailing pattern of the game when helping themselves to early points as the home side recycled the ball smartly into the hands of the supporting runners.

In the 13th minute Loughmore-Castleiney ‘keeper Richie Maher denied the raiding Jason Bergin after Conor Bowe had picked out the midfielder with a smartly-taken free, but Moyne-Templetuohy finally got off the mark thanks to a John Hassett free five minutes later (0-2 to 0-1).

Tom King set-up David Kennedy for a smashing left-footed effort in the 20th minute, but Moyne-Templetuohy then enjoyed their most dominant period of the afternoon when out-scoring their hosts (0-3 to 0-1) before the opening half reached a conclusion.

Two John Hassett frees and a superb catch and kicked effort from Conor Bowe helped Moyne-Templetuohy into a narrow lead (0-4 to 0-3), but Loughmore-Castleiney equalised on the stroke of half-time when Tom King battled his way through some significant traffic before clipping over a lovely score.

Brian McGrath and John Hassett (free) traded efforts during the opening five minutes of the second half before Shane Hennessy converted his spot kick in the 38th (1-5 to 0-5).

John Hassett set-up Odhran Lloyd for a Moyne-Templetuohy point in the 40th minute, but Loughmore-Castleiney responded with the score of the game seconds later when Tom King and Shane Hennessy combined before Conor Ryan delivered the composed finish.

Points from Jason Bergin and John Hassett (free) left the minimum between the sides with ten minutes to play while Moyne-Templetuohy must have sighed with relief in the 46th minute when Tom King set-up Anthony Ryan for a terrific goal-scoring opportunity, but Tomás Hassett performed a brave block to deny Loughmore-Castleiney a game-clinching goal.

Tommy Maher and Shane Hennessy played their part during the build-up to another Conor Ryan point in the 53rd minute before Loughmore-Castleiney won the subsequent Moyne-Templetuohy kick-out and when Tom King booted over from play the home side led by a very significant three (1-8 to 0-8).

A late John Hassett free dragged his side back into contention, but Moyne-Templetuohy struggled to create the goal-scoring opportunity which could have rescued the situation despite the three minutes of injury time played.