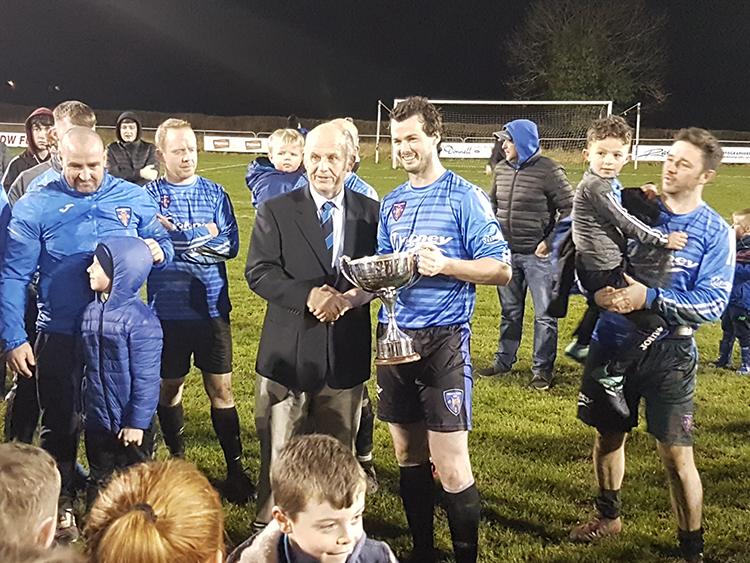 Killavilla United stormed to the North Tipperary & District League Premier Division title with an emphatic 8-0 win over Holycross FC on Saturday night in Roscrea. In a devastating performance Killavilla United, who are worthy champions, spurned a whole series of chances and could have won by an absolute landslide of goals.

Entering the contest the home side knew that they required just two points to seal the title and Killavilla United, who were inspired by the relentless Joe Moloney in the middle of the park, dominated the game right from the off. The champions-elect led 5-0 with just sixteen minutes on the clock. Indeed, Holycross FC were fortunate that the game was brought to a conclusion with fully ten minutes to play by referee Jim McGrath; that decision spared Holycross’ blushes in a horribly lop-sided contest.

The Killavilla United team were managed this season by David Nash and Joe Treacy. Denis Moloney was a key influence on the team as was the outstanding Paul Kirwan who has collected his third successive league winner’s medal - the centre-forward inspired Thurles Town to win the Premier Division title in 2016-17 and 2017-18. 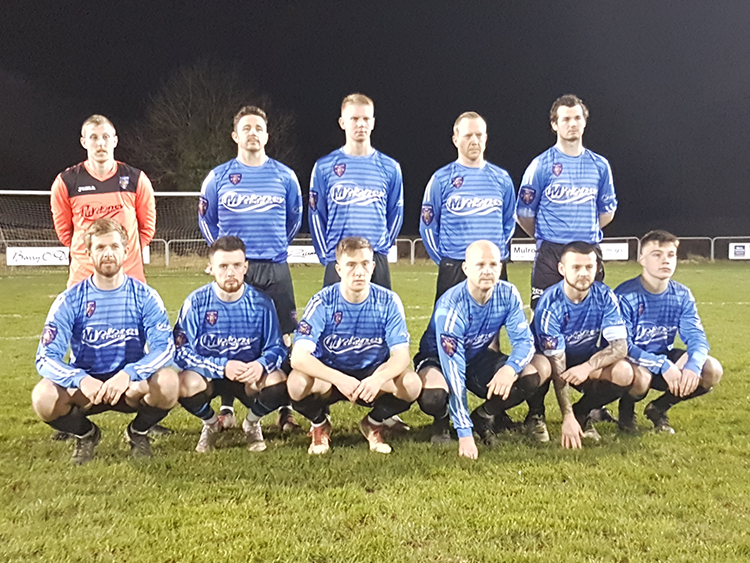 On Saturday night Killavilla United exploded into life right from the off and took the lead in the fourth minute when Shane Moloney flicked on a Joe Moloney throw-in and Ruairí Murphy finished from close range.

Next it was the turn of Shane Moloney to head home a Joe Moloney corner in the 11th minute - it was distressing to note from a Holycross FC point of view that Shane Moloney was allowed to head home while unmarked deep inside the visitors' penalty area. Out of possession Killavilla United worked incredibly hard, but the determination of David Nash's side to win back the ball contrasted starkly with a Holycross FC team who had little to play for on this occasion.

Killavilla United's fourth goal arrived in the 13th when Joe Moloney led a lightning-fast counter-attack; the ball was worked through Ruairí Murphy and toward the feet of Craig Phelan who set-up Paul Kirwan. The centre-forward was allowed to take a touch, turn and then pick his spot before making it 4-0.

Three minutes later Denis Moloney prodded a glorious ball over the heads of the Holycross FC defence and Joe Moloney flicked his effort past the advancing ‘keeper Gary Dwan for United's fifth goal.

Killavilla spurned a whole raft of chances thereafter and Holycross FC were extremely fortunate to trail by just five at the break.

Fourteen minutes into the second half Killavilla added to their tally when Paul Kirwan knocked Denis Moloney’s pin-point cross down to the feet of Joe Moloney who buried United's sixth goal.

In the 72nd minute Paul Kirwan helped himself to the seventh goal while Ruairí Murphy set up Joe Moloney for the eighth in the 79th.

Referee Jim McGrath brought the contest to a conclusion in the 80th minute which was probably a sensible decision considering the prevailing pattern of the game.

The Killavilla United squad of players and their management team pictured before the 8-0 win over Holycross FC on Saturday night in Roscrea.