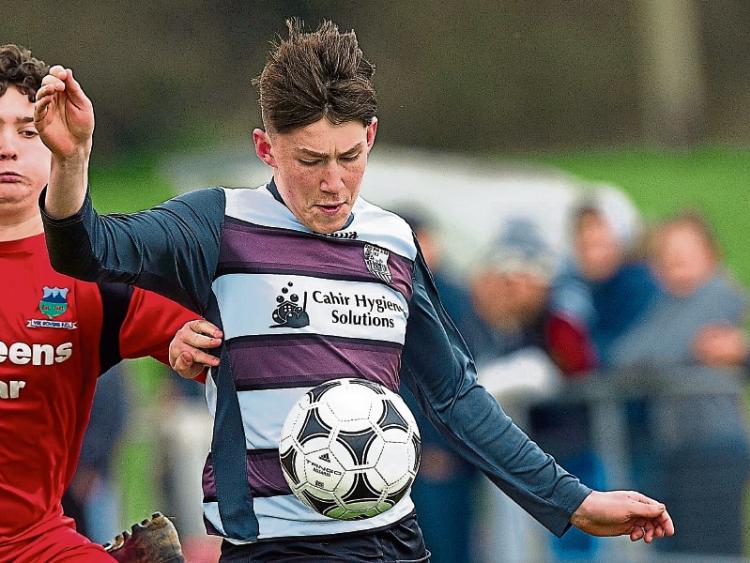 The youths got back into action after the Christmas break with some very important league and cup games as the division begins to shake out and decide who are going to win honours this season.

Cahir Park maintained their unbeaten run in Division 1 and in doing so put a big dent into any hopes that Peake Villa may have had in being involved in the title run in.

Two quick goals inside the first 11 minutes from David Clifford and Rhys O’Regan put the Park in control of the game but shortly before half time a Barry Ryan effort from the visitors brought the lead back to a single goal at the break.

A Rhys Byron effort however 18 minutes from the end made sure that the hosts were going to secure all three points and solidify their place at the zenith of the league.

Their nearest challengers are also their nearest neighbours, in Burncourt/ Vee Rovers and they stayed on the Cahir Park tails when they travelled to Clonmel and came away with a fantastic victory of their own.

In a game that was patchy and didn’t throw up many clear chances, the visitors persevered and scored a brilliant team goal near the end that was finished off by Gareth Butler to take the points.

In Division 2, the main action was in the Cup semi-finals.

Cashel Town travelled to Cullen  hoping to put some very poor league form behind them. Cullen took the lead in the game with a well-taken goal by Mark Faust and held the lead to the break.

However Ethan Molloy responded with a goal for Cashel after the break and neither team was able to add to their tallies before the end of the game sending the tie to extra time.

The home side were the stronger in time added on however and added to more goals without reply through Shane Hanrahan and Mickey Stokes to ease to victory.

The other semi-final was another good game between Clerihan and a visiting Bansha Celtic. The visitors opened the scoring early in the game with a goal by Robbie Byron, but the home side were in front by half time courtesy of a brace of goals from Conor Ryan and Daniel Quigley.

The game was nip and tuck in the second half with Clerihan finally making sure of the win with a  late third goal  from Brian O Sullivan.