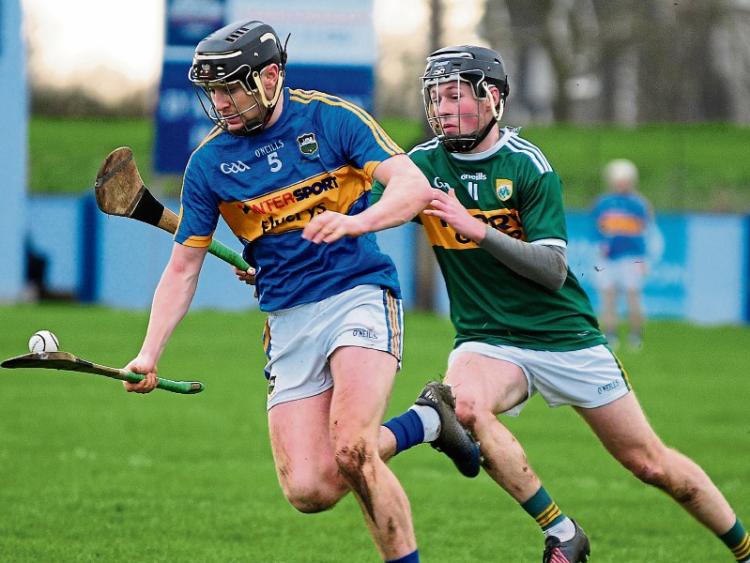 With the Christmas decorations securely stowed away for another year attention quickly switches to new horizons.

January can be a dark, bleak month so thank God for sport and the joy it brings to our lives.

Already the new season is up and running.  In previous years Tipperary opted out of the pre-season Munster Hurling League but a change of tack by Liam Sheedy sees the team through to a first final of the year on this Sunday against Clare.

It promises some early season excitement, maybe even a belated Christmas cracker.

I missed the Kerry game last Saturday at Nenagh where the home side put four goals past the visitors in a comfortable outcome. A mix of established and aspiring players delivered a scoring blitz before the break and that seems to have been decisive.

A Noel McGrath goal won particular praise as he first-timed a floating delivery with consummate precision. As ever check out the ubiquitous Buff Egan for a fleeting glimpse of a master in action.

With Clare qualifying at the expense of Waterford in the other key game of the weekend, it sets up a promising final.

Both managements have mixed experimentation with experience in this league thus far but I’d expect each to be keen on an early season boost now that they’ve made the final.

CLARE WILL BE FAMILIAR OPPONENTS IN THE COMING MONTHS

The fact that Tipperary welcome Clare to the Stadium a fortnight later for the opening action of the National League adds spice to this fixture.

Remember we also have that championship date at Cusack Park on June 2 so we’ll be seeing a lot of The Banner in the coming months.

This Munster League won’t be season-defining but winning is the name of the game, and I’ve no doubt Liam Sheedy will be razor-keen to lay down an early marker against Clare.

Start as you intend to go on might well be the motto, so I’d expect a reasonable level of intensity in this match on Sunday at the Gaelic Grounds. The line out will be instructive.

Anticipation is building ahead of the start of the league on January 26.

Liam Sheedy’s second coming has brought a buzz to the county but whether or not that translates into results is another matter.

2018 was one of significant slippage for Tipperary, so reversing that trend is now the challenge.

I was interested to hear John Kiely talk recently about binning the 2018 blueprint that carried Limerick to glory and starting from scratch again in 2019. He’s right, of course. Every championship season takes on a character of its own so you must always adapt.

Whether it’s a few new players freshening up the scene or positional realignment or tactical adjustments, it’s all about evolution. Wasn’t that what made Cody so great over so many seasons?

TEAMS CAN'T LIVE IN THE PAST

And isn’t that one of the reasons why so many managers fail on their second coming. Life - and hurling - moves on. You can never recreate the past.

There will be a different chemistry in the Tipp panel of 2019 than there was in 2018 or 2016 or 2010. Liam Sheedy’s task then is to build a new team with a new dynamic. Ultimately that’s his challenge. The manager has already identified the three strands that make up his panel.

You have the elder statesmen approaching the 30-year mark, then a group in the mid twenties and finally last year’s U-21s. It’s a diverse group so finding a proper balance and moulding them into championship contenders won’t be easy.

There’s certainly the potential there to put together a formidable forward line. Hopefully a few of the U-21s can step up to supplement Callanan, the McGraths, McCormack, Maher, Forde and company.

With the right balance, and if enough of those hit form, then we have attacking firepower to match anyone.

However, the situation is more problematic further back. We don’t have an established midfield pair and there are significant issues in our defence also. Billy McCarthy’s injury has paused a career that was showing real promise and Brendan Maher won’t be available until later in the season, at best.

There’s no consensus about our best option at centre back and full back is also an unresolved issue. Indeed the corner back spots have several contenders but perhaps no two that outshine the rest.

When you put all the jigsaw pieces together you have a forward line with huge potential but potential that won’t be properly exploited if the rest of the team is misfiring.

Then there’s the issue of discipline, one that some people in the county are eager to sidestep. When asked, Liam Sheedy has tended to deflect the focus away from such questions, which is understandable.

Privately, however, I’ve no doubt he recognises the issue and won’t shy away from it. It may centre on just a handful of people but it has a corrosive effect on the entire group.

Our U-21s salvaged last year with an incredible All-Ireland achievement against Cork. Sadly, however, a few of that group behaved disgracefully afterwards in Thurles during the celebrations.

These guys need to be reminded that wearing the jersey is a huge honour but it also carries a major responsibility to behave in a respectful and dignified manner.

I suspect the County Board won’t appreciate my mentioning this but I’m convinced that hiding the issue simply adds to the problem.

There are clear battle lines then facing Liam Sheedy and his management team. He has a lot of talent at his disposal but forging a cohesive, well-drilled and motivated team unit will test his undoubted managerial skills. Next Sunday might tell us more.

SEVERAL COUNTIES IN THE SHAKE-UP FOR ALL-IRELAND HONOURS

Unlike football and its domination by Dublin, there’s general agreement that the hurling race is wide open as we head into 2019.

Galway are listed as favourites on 5/2 with Cork, Tipperary and Limerick shadowing closely on 5/1. Kilkenny are next on 6/1 with Clare listed at 8/1 followed by Waterford, Wexford and Dublin on double-digit figures.

By contrast Dublin are streets ahead in the football stakes, being listed at 1/2 with Kerry their nearest challengers on 5/1.

Of course betting odds are wildly speculative at this time of year but nonetheless the figures do reflect public perceptions and can be taken as a barometer of how competitive this year’s hurling campaign is expected to be.

Galway’s role as favourites reflects the view that they under-performed last year but still have the wherewithal to regain top spot. Even while under-performing in 2018 they still lost the final by a mere point.

Limerick deserve to be in the mix also after their big breakthrough in 2018. There’s no indication that they’re satisfied with a single moment of glory and the manner in which they’ve coped with winning suggests they’ll be back stronger than ever. The age profile of the team is a major plus also, as is the inevitable confidence-boost from last year’s events.

I think Cork are something of a sleeping giant in the hurling world. For the moment they’ve lost the knack of winning titles but they’re edging ever closer to a return to greatness.

Last year a Nicky Quaid flick kept them out of the final and they’re still puzzled over how they managed to lose the U-21. They’ll be dangerous in 2019.

As ever you dismiss Kilkenny at your peril. Despite major changes last year as part of a rebuilding process they still came within a whisker of stopping Limerick. The Cats are always dangerous.

WATERFORD COULD FACE A DIFFICULT YEAR

2018 was something of an annus horribilis for Waterford, as their stock declined sharply. It’s difficult to see a breakthrough coming in 2019 for new manager Paraic Fanning.

Likewise one wonders if Davy Fitzgerald can push Wexford much further. Mattie Kenny’s progress with Dublin will be watched with interest but you’ll get long odds on a hurling/football double for the capital.

Finally, Boherlahan/Dualla’s junior B team fell tantalisingly short to Clare champions Inagh-Kilnamona on Saturday last in the Munster semi-final of the Killeedy-run tournament.

A one-point defeat at the end of extra time is painful but there was much to admire about the effort of the Tipperary champions.

Being forced to line out without four of their best players from the county final fifteen proved a bridge too far.

In this case the progress of the As undid the Bs.  Nonetheless there was widespread admiration for such an heroic effort from a depleted team.

P.S. The Tipperary Supporters’ Club hold their AGM and membership launch at the Anner Hotel, Thurles, on Thursday  January 17 at 8pm.

Membership is available online at www.tippsupportersclub.com or by phone contact with Jim Reidy on 086-3580718. As a member I have no problem urging others to do likewise.