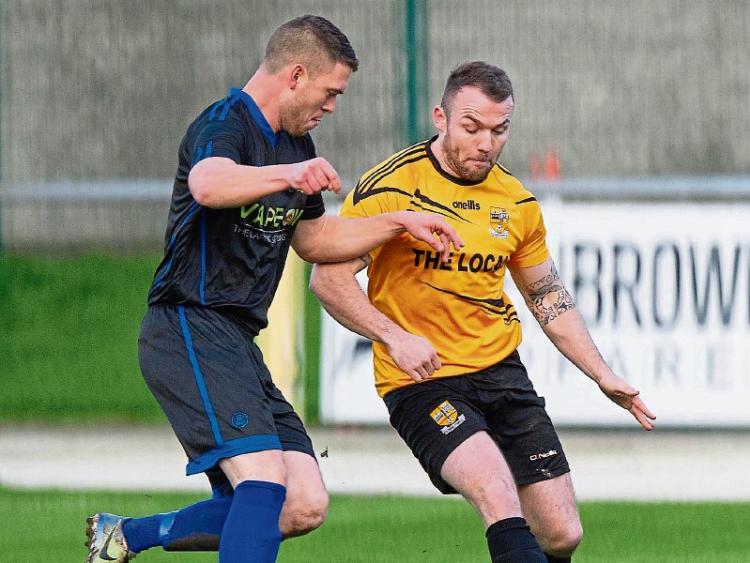 Evan McGuire (right) put Clonmel Town ahead against Wayside Celtic before being forced off with a serious arm injury. Town went on to win 3-1 at The Complex on Saturday to advance to the last 16.

Clonmel Town advanced to the last 16 of the FAI Junior Cup thanks to a fantastic 3-1  win over Dublin side Wayside Celtic in a classic cup tie in The Complex on Saturday last.

Town took a while to get started but hit the front after 19 minutes when a long throw from Conor O’Sullivan into the penalty area was flicked on by Craig Guiry and Evan McGuire was on hand to nod home from eight yards.

Disaster struck for Town ten minutes later when McGuire who was a thorn in the side of the visitors for the first half hour had to leave the field with a bad injury following  a  collision with the keeper. However his replacement Cillian Crowe wasn’t long getting in on the action and had two great chances to extend their lead but for great saves from the Wayside keeper whose heroics were keeping his side in the game.

It stayed just the one goal between the sides at the break and the hosts started the second half well, but they were rocked back on their heels when the visitors brought the game level in the 56th minute when Town conceded a free kick just on the edge of the box and the resultant free kick went straight to the net to make the game 1-1.

To their credit the home side dug in and defended well as the visitors now applied the majority of the pressure. Clonmel Town  eventually re-established their lead when Conor O’Sullivan stole down the right and his pinpoint cross was turned home by Craig Guiry with his trademark header to send the home supporters delirious.

The home side sealed the game in the third minute of time added on when Crowe dispossessed the centre back and set-up Keith Cashman who finished to the empty net, to add another famous victory to the former winners of this  competition.

St Michael’s got the goals here at vital times and had the discipline to withstand and defend well against second half pressure from an excellent Newmarket side to progress into the last 16 of this year’s New Balance FAI Junior Cup.

In the process Saints have  put out a team who would also have been quietly favoured by many to do very well in the competition.

This was as good a game as was seen in Cooke Park for many a day with a great tempo to it and was an excellent advert for junior soccer. 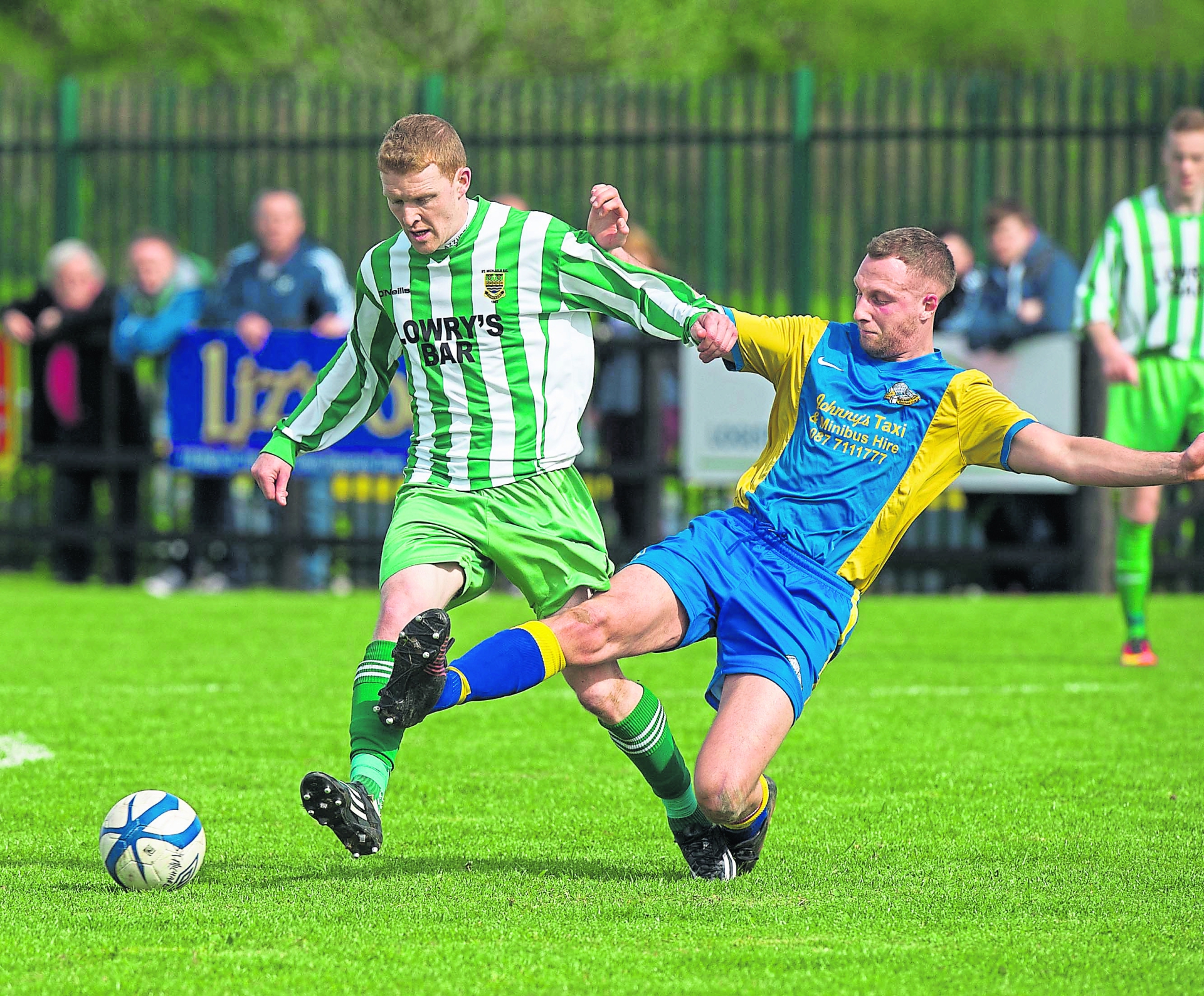 David Slattery (left) who put St. Michael's 1-0 ahead against Newmarket Celtic at Cooke Park on Sunday last in the last 32-round of the New Balance FAI Junior Cup.

Saints started well pressuring their opponents into giving them some chances from set pieces and from one of these, a ball fell kindly for David Slattery and his left foot shot from outside the area nestled in the corner of the net to make it 1-0 after only eight minutes.

The tempo continued to be high after this and with the ball flowing freely up and down the pitch both sides were making chances that had to be repelled by the respective defences.

The second goal was always going to be vital in that case, and luckily it went again to the home side when Saints won a corner on 23 minutes and Shane Ryan’s delivery held up in the breeze for Paul Breen to rise up and head home giving his side a two goal advantage.

A Jimmy Carr effort on the half hour mark looked like it had settled the tie for good when it went all the way to the net but the flag went up for offside, much to the chagrin of the large and vocal home crowd.

And they had the ball again in the net six minutes later when Jimmy Carr released John Connery but again an offside flag was raised and they had to be content with just a 2-0 advantage  at the half time break.

Celtic showed their intent at half-time bringing in an attacker Garry Higgins for full back Colin Ryan, and they did threaten the home defence a few times early in the second period. But with international stalwarts like Breen and Christopher Higgins in their ranks, the Saints were not for taking a backward step and soaked up what pressure was thrown at them with relative ease.

Anything that did make it past those two behemoths, then had to face another international Aido Walsh between the sticks, and he wasn’t for giving anything up easily.

In the end the home side probably spurned more chances to increase their advantage than give up goals to Celtic and they progressed to the last 16 where no doubt they will be one of the teams others will look to avoid when the draw is made.

Thurles side Peake Villa made it a clean sweep for the TSDL teams as they too advanced to the to the final 16 of the New Balance FAI Junior Cup for the second time in three seasons after a dramatic penalty shoot-out win over Inishowen Football League side Greencastle in Donegal on Sunday last.

Still adapting themselves to the surroundings, Villa found themselves a goal behind mid-way through the first half as a Matty Henry effort was too good for Willie Tierney in the Thurles side’s goal. However they were in no mood to travel all that way for nothing and showed their fighting spirit when Mikey Wade levelled proceedings right on the stroke of half time.

The second half was an even affair and Peake almost stole the game at the end when a Pippy Carroll free kick skinned the woodwork, but eventually it took penalty kicks to divide the sides. In this the visitors held their nerve and ran out 4-2 winners to book their place in the next round.

Follow all the best of Tipperary Sport on TipperaryLive.ie