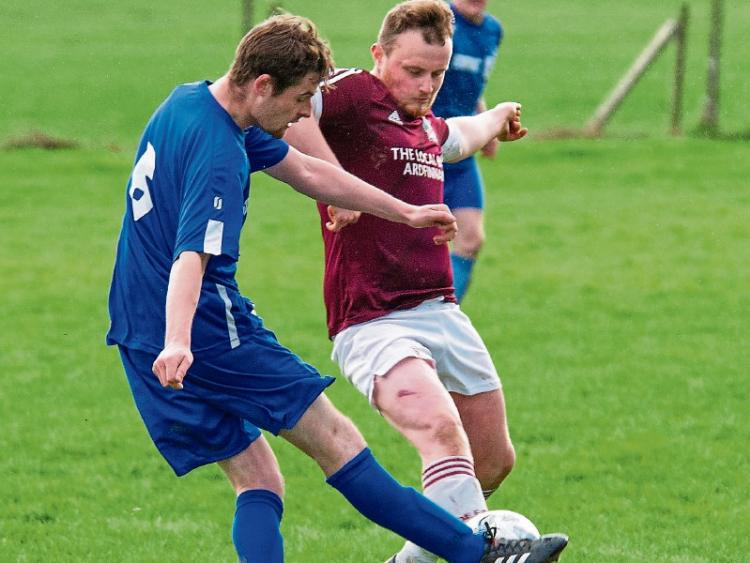 Cashel Town made it eight wins from eight games at the top of the Second Division with a comprehensive win against Galbally United to keep the heat on rivals Clonmel Town in the divisional title race.

The home side were in charge right from the kick off and had a few chances to open the scoring before David Butler finally took one and made it 1-0 in the 12th minute. However it was the visitors that struck next and Jamie Morrissey had Galbally back in the game with a well taken goal only eight minutes later.

The game was nip and tuck after that but the hosts went to the break a goal up when veteran Ian Hahessy poked home a goal from close range a minute before half time.

The better fitness of the home side  prevailed when they wore down their opponents and struck twice inside the final 15 minutes through a David Butler penalty and a James Harding shot.

League leaders Clonmel Town also maintained their 100% unbeaten record in the Second Division when they overcame an in-form Ballyneale side.

Just before half-time  the visitors Shane Ahern popped up  to put his side ahead.

The second period opened up even further and Town had a great chance to give themselves some breathing space when they were awarded a penalty in the 70th minute, but the chance was spurned when David Power made an excellent save in the Ballyneale goal. Ultimately though the single goal was enough for Town.

Kilsheelan have been underperforming in Division Two this season, but showed some indication of what they are capable of when given the opportunity, after they hit Donohill for six on Sunday.

In the 10th minute  the Kirwan brothers Eddie and Kevin combined to set Kevin free in front of goal and he drove low and hard to the bottom corner. Five minutes later, Kirwan doubled his and his side’s tally when he benefitted from more good build up play before finishing well. And in the 20th minute a Donohill corner kick was gathered by the home keeper and immediately released downfield to catch out the visiting defence allowing Mark Heffernan in on goal to make it 3-0.

Kilsheelan had to wait until the 53rd minute before getting their fourth when Ronan Quigley slammed to the net. Minutes later Jamie Cronin made it five and 11  minutes from time by Kevin Kirwan who completed his hat trick and took all three points for his side.

Kilmanahan United got over the heavy defeat of last weekend by coming from behind to beat local rivals Suirside, and in doing so put the Ardfinnan team into serious drop trouble.

It took until seven minutes after the break for the first goal from a bizarre source after a David Recontre corner kick got caught on the wind and deceived everyone to nestle in the net without any other player touching the ball. With something to hold onto now, Suirside became more dogged in defence, consistently denying the home side from building any momentum.

All that good work came to nought nonetheless in the 68th minute when they conceded a penalty and Connie Power levelled. After that the home side dominated and finally got their reward when Johnny English was first to react to a corner kick dropping in the area and he fired home the winner.