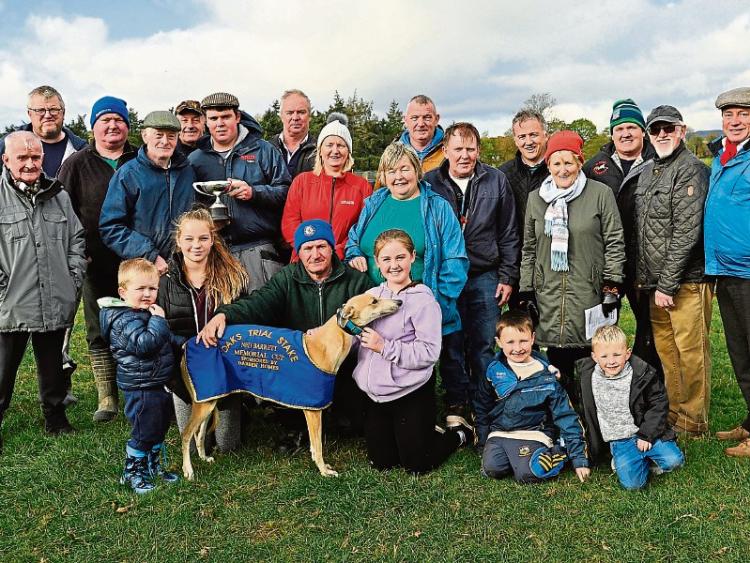 Owner Ollie Hill from Doon, Co. Limerick with members of the McLean family from Clonmel and friends after Thruthechairshaw won the Oaks Trial Stake at Crohane and Killenaule

The National Coursing Meeting swings into action at Powerstown Park, Clonmel, this weekend.

The 94th annual meeting will be held for three days from Sunday-Tuesday, February 3-5, and once again the performances of several locally-owned and trained dogs and bitches will be followed with keen interest.

The favourite for the Horse and Jockey Hotel Oaks is Newinn Fifi, owned by Shari-Anne O’Donnell in New Inn and trained by Owen McKenna, also in New Inn. She qualified in Listowel and went on to justify her favouritism by winning the Corn na Féile Puppy Stakes in Abbeyfeale, which is usually a good pointer for Powerstown form.

Newinn Fifi is a litter sister of another bitch with strong local connections. Ballinakill Gaga is jointly owned by John O’Dwyer, Clonmel, and Adam Dunford from Ballinamult in County Waterford and is trained by Adam’s father Tommy.

John O’Dwyer has enjoyed notable success on the track, famously winning the BoyleSports Irish Derby in 2016 with Rural Hawaii. Ballinakill Gaga won the last qualifier of the season in Sevenhouses in Danesfort, County Kilkenny.

Both Newinn Fifi and Ballinakill Gaga were bred by Shari-Anne O’Donnell.

Catherine Tobin from Sean Treacy Park, Carrick-on-Suir, will be making her first trip to Powerstown as an owner with Maggs Fly, which is trained by Lester Collins in Clonea Power and qualified early in the season at Cashel.

Quarrymount Kim is owned by the Qq syndicate, which is led by Jim Quinlan in Emly.

The syndicate also includes his wife Anne and former Limerick hurler Ollie Moran, who is married to Jim’s daughter Lisa.

Kevin McLean in Clonmel trains Thruthechairsaw for Ollie Hill in Doon. This one qualified at the Crohane meeting in Killenaule.

Thurles-based Katriona Bourke and her daughter Aifric Mockler will be represented by Samsara, which qualified in Dungarvan. A number of other runners in that stake have since qualified for Clonmel, so this bitch will be watched closely.

Magical Hannah is owned by Alice Guilfoyle, Cloughjordan, who’s no stranger to track success, and is trained by her son Pat.

The Tipperary interest in the Oaks is completed by Go Jetter from Nenagh, which is owned by brothers Jamie and Darragh Meagher whose mother, Suzanne Kelly, made her name as a camogie player, winning no less than five All-Ireland senior medals and two All Stars.

In the BoyleSports Derby, meanwhile, Chance Me Alonso is owned by the Well Ayled Syndicate, led by John Ryan from Ayle, Cappawhite. The dog, which qualified in Nenagh, is trained by Declan Byrne in Carrick-on-Suir.

Cooney is owned by the Coalition Syndicate, led by John Cooney in New Inn and which also includes former Minister of State Tom Hayes. Trained by Owen McKenna in New Inn, Cooney won its trial stake at the Tubbercurry meeting in Sligo.

Galtee Snow is owned by the Galtee Sydicate, which is led by Pajoe Casey in Galbally.

John Mulcahy in Clerihan and James Lavery in Tarbert, Kerry, are joint owners of Please Harry, which qualified in Dungarvan and which John Mulcahy also trains.

Cashel’s Tom O'Dwyer, no stranger to success in Clonmel, owns Smokey Harvey, which qualified in Borrisoleigh.

John O’Neill from Cappawhite has Toems Magic, which qualified in Thurles; while Upthemainroad is owned by a syndicate in Coolmore including Conor O’Donnell, Paddy O’Donovan and John Keegan. This dog is trained by David and Margaret Flanagan in Fethard and qualified at the Crohane meeting in Killenaule.

Visitors and local greyhound enthusiasts alike will also be well catered for by greyhound racing at the Clonmel track on Saturday, Sunday and Monday nights.

The three-day coursing meeting will once again attract thosuands of visitors to Clonmel, and most accommodation in the town and surrounding area has already been booked.

The coursing will be closely followed by the horse racing meeting at Powerstown Park on Valentine’s Day, February 14.

The feature race is the €40,000 Grade Three Surehaul Mercedes Benz Novice Hurdle, in which there was a local success last year when Chris’s Dream scored for Clonmel’s Brian Acheson.