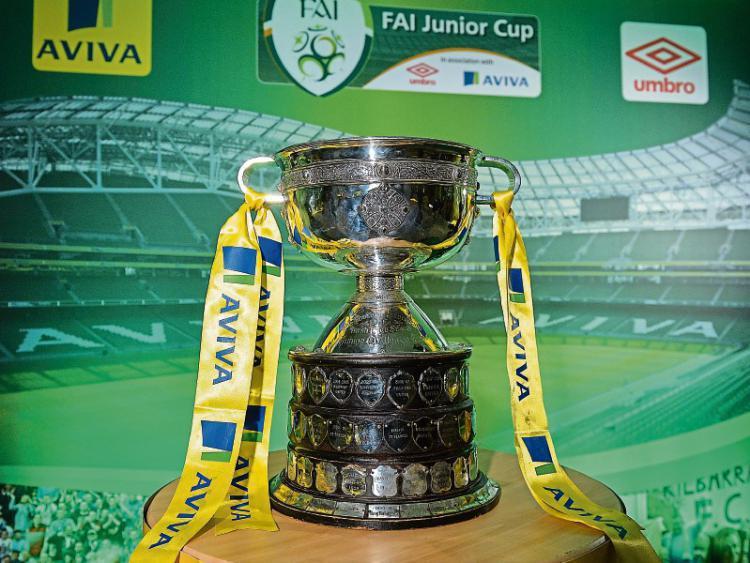 Cooke Park in Tipperary town was the place to be on Sunday afternoon when a heroic ten-man St Michael’s team beat Galway's Mervue United 2-1 and duly joined Clonmel Town in the quarter-finals of the New Balance FAI Junior Cup. And, this win was testament to the wonderful spirit that manager James Walsh has built at St Michael’s. Indeed, despite finding themselves reduced to ten men in the 43rd minute the Tipperary Saints fought on brilliantly and deservingly found a second half winner which arrived courtesy of David Slattery.

Initially St Michael’s appeared to struggle with the robust approach of the Mervue United team. Indeed, the Galway side opted to employ plenty of back-to-front deliveries during this contest and it wasn’t until the Saints began to dominate the second ball that the home side took control of this encounter. Unfortunately, by the time St Michael’s earned a real foothold in the game the visitors had taken the lead - in the seventh minute Enda Curran headed home from close range after a left foot cross from Barry Moran (0-1).

St Michael’s asserted themselves thereafter and slowly, but surely took control. And, the goal-scoring chances soon followed. Prior to the opening goal a Seán Guerins header, following a pin-point Jimmy Carr corner, flew narrowly wide while in the 23rd minute Carr flicked on John Connery’s cross and David Slattery was unlucky not to make a telling connection with the goal at his mercy.

Two minutes later St Michael’s created a real gilt-edged opportunity when Shane Ryan ploughed through some brilliant work down the left and picked out Jimmy Carr, but Carr’s rasper was brilliantly saved by Colm Power in the Mervue goal.

And, St Michael’s were fortunate not to concede a second goal prior to the break as ‘keeper Adrian Power was asked to make two outstanding saves - the first from Jason Molloy and the second from Barry Moran.

The Saints regrouped at half-time and introduced Colin Bargary who was absolutely relentless alongside Shane Ryan in the middle of the field thereafter. But the key man from this juncture was Jimmy Carr who took the game to Mervue United and absolutely terrorized the visitors’ defense down the left flank.

Four minutes into the second half Shane Ryan’s corner was half-cleared and Colin Bargary’s absolute rasper was deflected narrowly wide with an unsighted Colm Power in the Mervue goal reduced to the role of spectator.

Despite playing with a numerical advantage Mervue United appeared to lack ideas once in possession of the ball and the Saints’ back four coped admirably with everything thrown at them.

In the 59th minute Colin Bargary turned over the ball deep inside the Mervue half, played a neat one-two with David Slattery and then found Shane Ryan who saw his effort saved by the impressive Colm Power.

Finally, with twelve minutes of normal time remaining St Michael’s grabbed the goal which their enterprising approach deserved - following a brilliant run down the left flank Jimmy Carry beat two defenders and picked out David Slattery who thundered home a fantastic left-footed scissors kick (2-1). A special moment to bring a really entertaining encounter to a conclusion.

On Saturday afternoon Clonmel Town beat the famed Crumlin United 4-3 in Dublin; Clonmel trailed 2-3 at the break, but two Keith Cashman goals in the second half propelled the Tipperary South & District League side into the last eight of this prestigious competition.

And, Clonmel Town and St Michael’s could yet be joined in the quarter-finals by Peake Villa. Peake Villa were scheduled to take on Westport United on Sunday in Thurles, but that contest was postponed due to a bereavement in the Mayo club.

One of the most eye-catching ties during the sixth round of the New Balance FAI Junior Cup saw Thurles outfit Peake Villa embark on a daunting 417-kilometre journey to take on Greencastle Celtic (Inishowen District League) in Donegal. And, Peake Villa famously forced their way into the last sixteen of the competition following a penalty shoot-out. Villa fell behind in the game, but earned a draw thanks to a Mikey Wade strike (1-1). Then, in the shoot-out, Darren McGuire proved the hero when he fired home the winning spot kick (4-2).

Clonmel Town forced their way into the last sixteen courtesy of a home win over Wayside Celtic of Dublin (3-1) while an outstanding St Michael ’s team, who won the competition outright as recently as 2014, faced last season’s semi-finalists Newmarket Celtic (Clare & District League) in Tipperary and won 2-0.

The remaining three games - Peake Villa v Westport United, Regional United v Tramore AFC and Ballymun United v Aisling Annacotty - are expected to take place next weekend. The draw for the quarter-finals will be made at a later date.