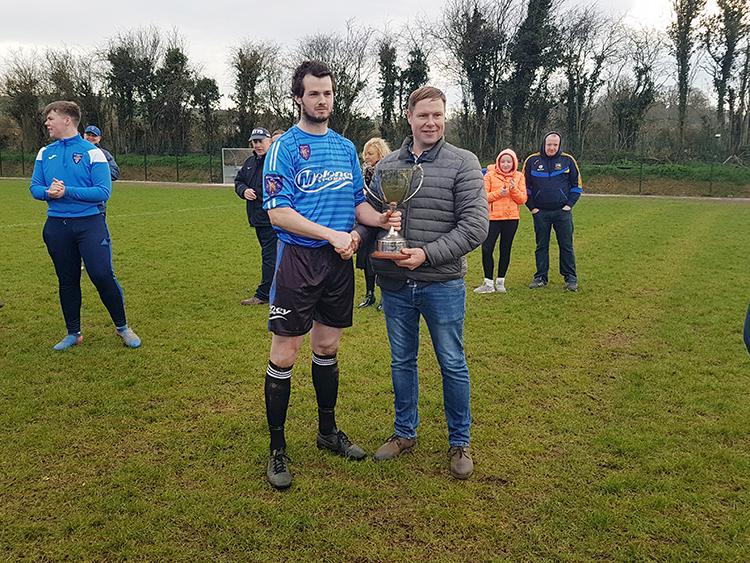 A resolute Killavilla United team completed the North Tipperary & District League double on Sunday when the side managed this season by David Nash and Joe Treacy earned a penalty shoot-out win over Blackcastle Templemore Harps at the Moneygall FC Grounds. Killavilla really had to earn this one. Indeed, the league champions were forced to fight back from 1-3 down to force extra-time and then sub ‘keeper Jason Ryan proved the hero in the shoot-out - the TipperaryLive.ie report on this final features a video of the dramatic shoot-out.

Following a dramatic contest we were treated to a penalty shoot-out which got off to an emphatic start when Stephen Delaney and Stevie Nolan buried early efforts. Killavilla’s Michael Ryan then thundered his shot off Stephen Byrne’s crossbar before United ‘keeper Jason Ryan saved Jack Kennedy’s effort - Jason Ryan was introduced with two minutes to play in the second half of extra-time for starting ‘keeper Brian O’Lone.

Then it was the turn of Paul Costello, Johnny Coleman, Joe Moloney and Ben Stapleton to exchange spot kicks before a Shane Moloney rasper presented Killavilla United with a narrow 4-3 advantage. Cathal Scully then enjoyed the opportunity to take the shoot-out to sudden death, but, unfortunately, the BT Harps captain lifted his shot over the bar after Killavilla ‘keeper Jason Ryan had guessed right.

See below for a full video of this dramatic penalty shoot-out.

Killavilla United fielded without the highly-influential Denis Moloney at the base of their midfield and opted to play star centre-forward Paul Kirwan in the role. And, while the United challenge appeared a little diluted as a result so too was that of BT Harps as key playmakers Stevie Nolan and Ben Stapleton had played a Mid Tipperary under-21 football final on Sunday morning with Drom & Inch.

Blackcastle Templemore Harps, however, seized the initiative in the eighth minute - Martin Harty sent Jack Kennedy away down the right flank with a beautifully-weighted ball in behind and Roddy Teehan fouled the winger for a penalty which Johnny Coleman stroked home.

Killavilla enjoyed two significant opportunities soon after - the first fell to Joe Moloney, but he steered his half volley wide and then in the 19th minute Brian Moloney failed to make a telling connection when Paul Kirwan flicked on Joe Moloney’s throw-in.

United found themselves back on terms in the 28th minute when Brian Moloney sprung the offside trap and played in Craig Phelan who beat the advancing Stephen Byrne with a neat touch.

Six minutes later, however, BT Harps edged their noses back in front - when Killavilla failed to defend a throw-in Lorcan Roche was fouled for another penalty and Johnny Coleman beat Brian O’Lone with another composed spot kick.

Although Killavilla were frustrated by a handful of marginal offside decisions during the opening half United did created another brace of notable opportunities - in the 37th minute Stephen Byrne denied Craig Phelan with a fingertip save while in the 42nd Brian Moloney appeared to be dragged down, but all appeals for a penalty were waved away by referee Jim McGrath.

Paul Kirwan was re-positioned to centre-forward early in the second half, but before the veteran could make his presence felt Blackcastle Templemore Harps notched their third goal in the 56th minute; Stevie Nolan conjured a brilliant diagonal delivery from the left, split the Killavilla defence and played in Martin Harty who buried a cracking right foot shot. And, BT Harps almost opened a three-goal lead five minutes later when Brian O’Lone was asked to pull off a great save to deny Stefan Leahy from point blank range.

During the final twenty minutes Killavilla United showed the pedigree of champions when they poured forward. With eighteen minutes to go Paul Costello was unlucky to see his effort fly wide of the post while in the 80th minute Paul Kirwan’s header demanded a terrific save from Stephen Byrne following a Joe Moloney corner.

Finally, with six minutes to go United battled their way back into the contest when a Paul Kirwan knock down found Joe Moloney and the midfielder did especially well to score from close range.

The momentum of the contest had now swung very much in favour of Killavilla and the United lads plundered an equaliser with three minutes of normal time remaining - Ian Treacy and Craig Phelan combined smartly down the right before Phelan’s cross found the head of Joe Moloney. Somehow Stephen Byrne got down smartly to this left to save Moloney’s thundering header. Moloney, however, managed to regain possession and was fouled for a penalty which he took himself; BT Harps ‘keeper Stephen Byrne heroically saved the spot kick and although Craig Phelan’s follow up was blocked on the line Joe Moloney was on hand to stab home the equaliser from close range.