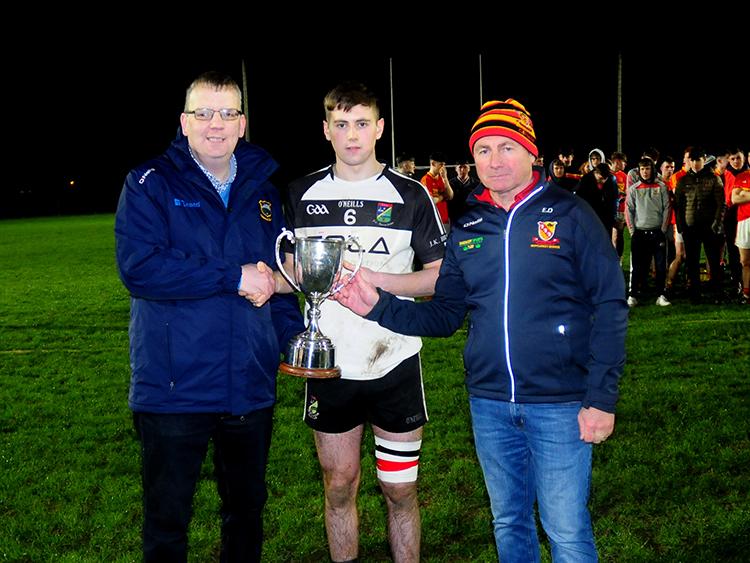 Defending county champions JK Bracken’s Óg were emphatic winners over Moycarkey-Borris in the Darmody Sports Turf sponsored Mid Tipperary Under-21A Football Championship final which was played at Templetuohy on Saturday. The final scoreline, however, did not do justice to the efforts of the challengers in a fine contest.

In ideal conditions both sides played football of a high order, but JK Bracken’s Óg were that shade slicker with their team work and decision making being particularly impressive.

The biggest difference between the sides, however, was in front of goal where the Templemore lads were far more clinical in executing the opportunities created and on this showing it is going to take a good team to relieve JK Bracken’s Óg of their county crown.

UPSET ON THE CARDS

An upset looked on the cards early on as Moycarkey-Borris, buoyed by a Max Hackett goal in the 11th minute and a point immediately afterwards, forged 1-2 to 0-2 ahead. Shane Doyle and the very industrious Éanna McBride had raised white flags for JK Bracken’s Óg and Anthony McKelvey pointed a free for his side during a very lively opening.

Moycarkey-Borris were playing neat and energetic football and stretched their opponents all the way, but JK Bracken’s Óg kept their composure and as Moycarkey-Borris began to wilt a little the Templemore lads got a grip in the second quarter to establish an advantage that they never relinquished.

It was a productive period for them too as they hit five unanswered points - through Andrew Ormonde, Éanna McBride, Shane Doyle (two) and Neill Quinlan - to establish a 0-7 to 1-2 lead at the break.

It was by no means an insurmountable lead if Moycarkey-Borris were good enough, but the second half saw the Templemore side once more dominating; their ability to pick off their scores was in marked contrast to Moycarkey-Borris’ shortcomings near the posts.

Moycarkey-Borris needed a goal, but James Dillon’s effort was off target in the 46th minute. And, Templemore went up the field for a Neill Quinlan free, but in another Moycarkey-Borris raid in the 50th minute Rhys Shelley’s flick looked to be headed for the net but JK Bracken’s Óg goalie Kuba Beben got his hand to the shot and turned it away.

A goal from either of those chances might have brought about a different ending, but, instead, with four minutes to play Nick Keane was in the right spot to net for JK Bracken’s Óg after an initial effort by Lyndon Fairbrother was parried (1-13 to 1-4).

Though Andrew Ormonde added another point for them before the finish that goal set the seal on the JK Bracken’s Óg win and they now look forward to a clash with the West champions in the county semi-final as they bid to put county titles at this level back-to-back for the first time.

This was a fine display from JK Bracken’s Óg who were without key figure Paddy Cadell (recovering from recent surgery). What an addition he would be for the county series if he is fit. However, his deputy Lorcan Roche had a fine game while Éanna McBride, team captain Tom Murphy, Andrew Ormonde, Michael Egan, David O’Shea and Jack Prout were others to figure prominently.

Moycarkey-Borris’ early flourish suggested they could cause an upset and while they stuck manfully to their task they can have no complaint about the result. The margin of their defeat did them no favours, but Rhys Shelley, Max Hackett, Philip Ryan, Diarmuid Maher, and Eoghan Hayes worked very hard to turn the tide in their favour.