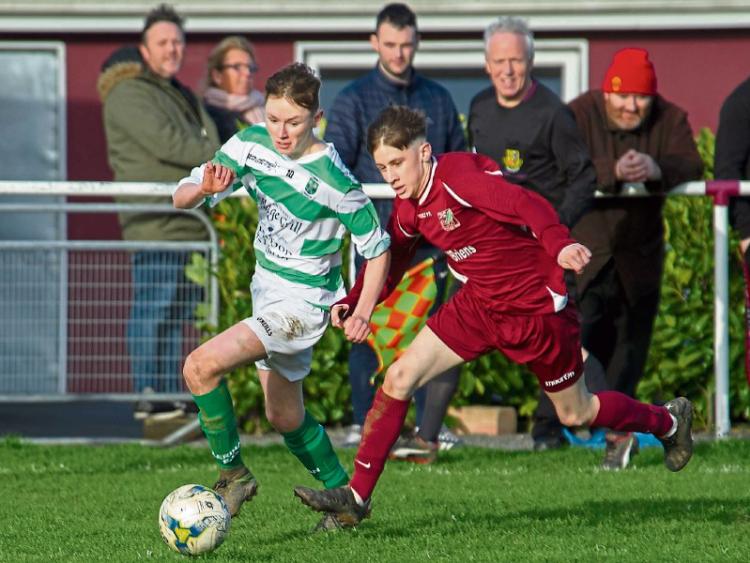 Daniel Quigley (Clerihan Youths) and Jack O'Halloran (Cullen-Lattin Youths) in a race for possession during the Division 2 Youths Cup Final.

Cullen’s youth delighted their supporters at Aisling Park in Cullen on Saturday last when their youths picked up the Division Two Cup against Clerihan after extra-time.

The visitors came to the game in excellent form and probably started slight favourites, something they looked to justify as they took charge of the game early on. The visitors were given a gilt edged chance to open the scoring in the 12th minute after the Cullen keeper was adjudged to have fouled Conor Ryan but a brilliant save by Josh Moloney made amends for his error in conceding the penalty in the first place.

Clerihan were well in the ascendency however and finally opened the scoring ten minutes later when Brian O'Sullivan intercepted a pass in the middle of the pitch and fed Damien Quigley who chipped the stranded keeper. Cullen were hanging in at this stage but eventually began to create some chances with Mikey Stokes unlucky from a tight angle shortly before the break.

The home side however came out in the second half much livelier and were level within three minutes when Stokes found Mickie O'Brien from a corner kick and he buried his effort from less than six yards out. They almost took the lead on the hour mark but saw Tony O'Neill's shot hit the angle and rebound away to safety.

Against the run of play then, Clerihan regained the lead in the 62nd minute when Cullen conceded a corner and were unable to clear, with a Clerihan player pouncing to fire to the net from 12 yards.

The home side’s chances got worse shortly after when they were reduced to ten men but they did manage to level the game fifteen minutes from time when Shane Hanrahan headed home a Tony O'Neill cross.

After that the home side made excellent use of the new roll on roll off rule to keep their players fresh despite being a man down and conceded no further goals, bringing the game to extra time. Both teams were tired by this time though and no chances were created in the first period, with a feeling that it might take penalty kicks to divide the teams in the end.

Cullen were having none of that however and took the lead for the first time in the tie four minutes into the second period of extra time when Shane Hanrahan found Eoin McGrath in space and he chipped the Clerihan keeper from distance to put his team in front. Forced to chase the game now, Clerihan left gaps at the back and this was exploited in the final minute when McGrath found Mickie O'Brien upfield to smash home sending the home fans wild with delight.