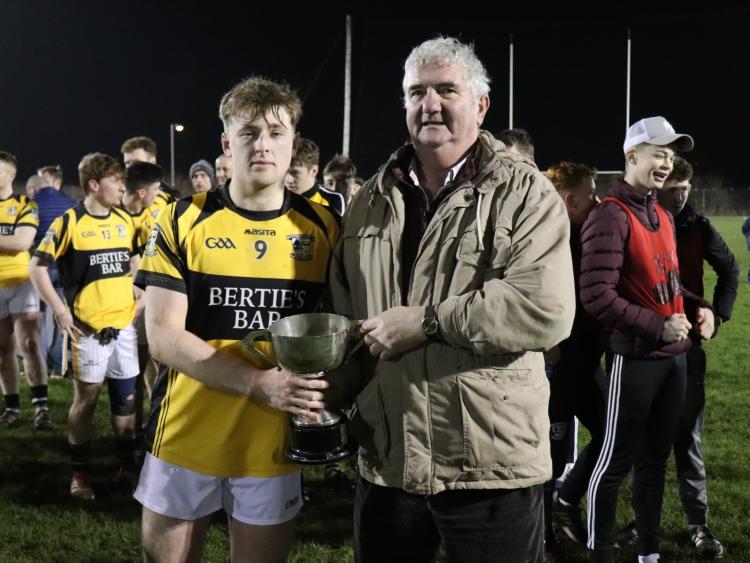 Knockavilla-Donaskeigh Kickhams claimed a fifth McGrath Oil West Tipperary Under-21B Football Championship title and a second in-a-row when they saw off Éire Óg Annacarty-Donohill in Clonoulty on Sunday evening. This final was played in ideal conditions for the time of year and Devon Ryan’s goal proved the difference between the sides at the final whistle.

Éire Óg dominated possession early on, but struggled to find the target. At times they cut holes in the Kickhams defence, but just couldn’t make it count on the scoreboard.

Devon Ryan, who finished the game with 1-6, opened the scoring after six minutes with a point from play.

The scores were still slow to come by and Éire Óg eventually got off the mark after eleven minutes of play through Jack Kingston.

The game’s only goal arrived minutes later. Kickhams struggling to break past the Éire Óg defence, but eventually found a gap and Devon Ryan scored the game’s opening goal.

Conor Bradshaw responded with two points in a minute to keep Éire Óg right in the mix. Éire Óg though should have been ahead, but added to their wides tally during another period of dominance.

Devon Ryan pointed to put Kickhams two points up. They too now had chances, but failed to add to their tally. Conor Devlin pointed in injury time for Éire Óg to leave just a point between the sides at the interval - Knockavilla-Donaskeigh Kickhams ahead 1-2 to 0-4.

Aidan Griffin levelled on the resumption, but Devon Ryan quickly pointed Kickhams back into the lead. Devon Ryan and Cian Mooney swapped points to keep the minimum between the sides after ten minutes of the second half.

Devon Ryan pointed from play and Ger Browne pointed from a free (the first of the game) to give Kickhams breathing space. This was quickly followed by a Devon Ryan free and Kickhams looked as if they were in control.

Éire Óg lost Liam Óg O’Dwyer to a black card, but this didn’t deter them. They continued to create chances, but struggled to put them away. Paul Devlin pointed a free in injury time to put three points between the sides, but they failed to find a goal to send the game to extra-time. Knockavilla Donaskeigh Kickhams winners.