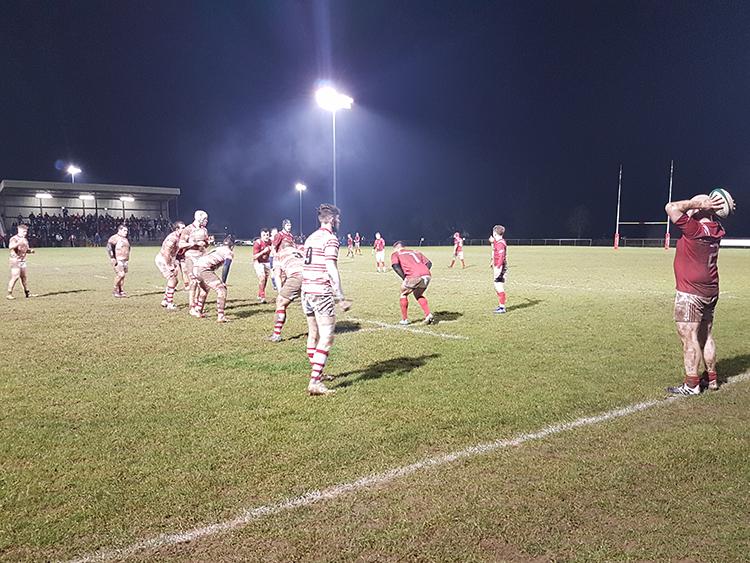 The All-Ireland League division 2A battle between Nenagh Ormond and Cashel RFC was absolutely enthralling at New Ormond Park on Friday night.

Nenagh Ormonde and Cashel RFC battled to a stalemate (10-10) in an absolutely enthralling encounter between the Tipperary rivals in division 2A of the All-Ireland League at New Ormond Park on Friday night. And, it was a real pity that the fixture did not attract a more significant crowd to the North Tipperary venue because those who did attend were treated to one of the most entertaining rugby games of the season.

Cashel RFC appeared the more accomplished side during this bruising encounter and fought back from ten points down at the interval to tie the game in the 72nd minute. And, although Jonty Rae steered a late Cashel RFC penalty wide in the 81st minute the Nenagh Ormond lads, given their defiance, probably deserved to get something out of the game.

In possession Cashel RFC looked the slicker and more powerful outfit, but Nenagh Ormond proved that it is still rugby when you don’t have the ball. Indeed, the home side performed way above the standard that they have set for themselves this season and you would have to wonder why Nenagh don’t play like this all the time. If the Ormond performances featured this grit on a more regular basis the club would not find themselves at the wrong end of the division 2A table.

Next Saturday (March 9) Cashel RFC host Galwegians while Nenagh Ormond are away to Queens University (both games kick-off at 2.30pm).

Nenagh Ormond set the pace early on. They appeared to catch Cashel RFC off guard and following an enterprising start to the contest Alex Ropeti kicked the home side into a deserved lead in the 13th minute.

Cashel RFC, however, started to piece their game together and attacked their hosts in wave after wave. Throughout this contest Ormond were disciplined in the tackle and although Cashel were camped inside the home side’s 22 on three significant occasions between the 15th and 21st minute Nenagh turned the ball over each time. Indeed, tempers flared in the 21st minute when Nenagh celebrated a penalty for holding on and Cashel’s Tommy Anglim was sin-binned following the incident.

The interval provided Cashel with an opportunity to re-group, but Nenagh seized the initiative immediately after the break when thirteen seconds after the kick-off some disciplined tackling deep inside their opponent’s 22 earned the Ormond lads a penalty which Alex Ropeti belted left and wide.

Six minutes later Cashel RFC won a penalty deep inside the Nenagh half and although it was very kickable Denis Leamy’s men, in an illustration of their ambition, kicked for the corner. Cashel knocked on the subsequent line-out, but in a show of raw strength they pushed Nenagh off their put-in to the scrum and Idris Rqibi scooted in for a rousing try which Jonty Rae converted (10-7).

The devastating carries of Ed Leamy were becoming a real feature of this contest now as Cashel pressed for a second try. Once more, however, Nenagh clung on and significantly turned over a Cashel RFC ball carrier right on their line in the 59th minute.

A minute later Ormond were reduced to fourteen men when John Healy was sin-binned for blocking Darragh Lyons following the Cashel out-half’s clever kick through. Once more Cashel opted to go for the corner and, once more, Nenagh defended brilliantly and turned over the ball three times before the home side conceded a penalty deep inside their own half in the 72nd minute and Jonty Rae tied the game (10-10).

You certainly feared for a tiring Nenagh side at this juncture and especially when a collapsed scrum presented Jonty Rae with an opportunity to edge this thriller in the 81st minute. The full-back’s shot flew wide and right.