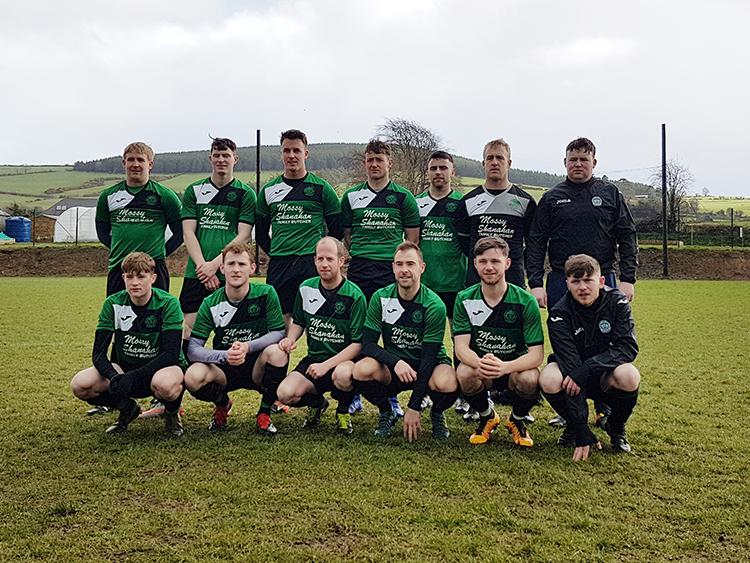 Blackcastle Templemore Harps were utterly dominant in this decider and eased their way to a 3-0 Kevin Fogarty Tipperary Cup final win over Sallypark Odhráns at Moneygall on Sunday afternoon. Harps had narrowly missed out on the Premier Division league and cup honours already this season and they were determined to collect some silverware on this occasion. Right from off Harps controlled proceedings and may well have won by a much more significant margin had Sallypark ‘keeper Damien Corcoran not managed to pull off a string of saves.

Sallypark Odhráns opted to go very defensive right from the off. And, you could not blame the division one side for adopting such an approach, but with the Harps players enjoying the room to control the ball, turn and pick out their passes deep inside the Sallypark half the result of this contest was inevitable.

Jack Kennedy played Stefan Leahy in early as the sixth minute, but ‘keeper Damien Corcoran smothered the chance at his near post. Six minutes later Ben Stapleton fired his effort straight at Corcoran and although Stefan Leahy steered home a terrific finish in the 16th minute following slick combination play between Luke Quinlan and Martin Harty the effort was ruled out for offside.

Three minutes later Harps carved open Sallypark once more - Dean McEnroe and Luke Quinlan combined smartly before Jack Kennedy’s cross found the head of Martin Harty. Somehow Damien Corcoran scrambled across to save once more. And, the Sallypark ‘keeper was called into action once more less than a minute later when Jack Kennedy created an opportunity for Martin Harty which Corcoran parried away to safety.

In the 22nd minute a long-range effort from Dean McEnroe flew narrowly wide. That effort had reduced Damien Corcoran to the role of spectator and you felt that it was only a matter of time now before BT Harps took the lead. And, we only had to wait another two minutes for the game’s opening goal. In the 24th minute, following a foul on Jordon Moloney, Dean McEnroe swung in a left-footed delivery from the right and although Corcoran saved a stinging shot from Martin Harty left winger Ben Stapleton was on hand to bury the rebound (1-0).

By the half hour mark a frustrated Sallypark Odhráns side had picked up three cautions and their predicament grew significantly more complicated in the 43rd minute when Harps’ right back Jack Kennedy delivered a glorious back-to-front ball in behind the back four and into the path of Luke Quinlan who buried his shot in the roof of the net (2-0).

Sallypark Odhráns were much more positive in the second half and pushed up on their opponents. And, that tactical adjustment almost earned their side an immediate dividend: in the 47th minute Aaron Reid led a counter-attack and Alvis Dauko demanded a good save from Harps ‘keeper Shane Scully. Patrick O’Connell enjoyed another half chance soon after and, suddenly, Sallypark Odhráns were playing some encouraging stuff.

The match-clinching goal materialized for Blackcastle Templemore Harps in the 64th minute when Dean McEnroe swung in a left-footed free kick from the left flank and Jordon Moloney cleverly deflected the low cross home via a back heel (3-0).

In the 72nd minute a Sallypark Odhráns counter-attack almost yielded a goal, but James Devaney’s effort was saved by Shane Scully while in the 84th minute Eoin Ryan thundered in a great effort after Mark Dwyer’s corner broke to the centre-half, but Ben Stapleton was on hand to block the effort on the line.

Finally, with just a minute to play it appeared as if Sallypark Odhráns had conjured a goal. James Devaney did especially well to rush a BT Harps defender, turnover the ball and race through. Devaney drew the ‘keeper and unselfishly set up David Young for an easy finish. Unfortunately, David Young had strayed into a marginally offside position and the goal was, cruelly, ruled out.