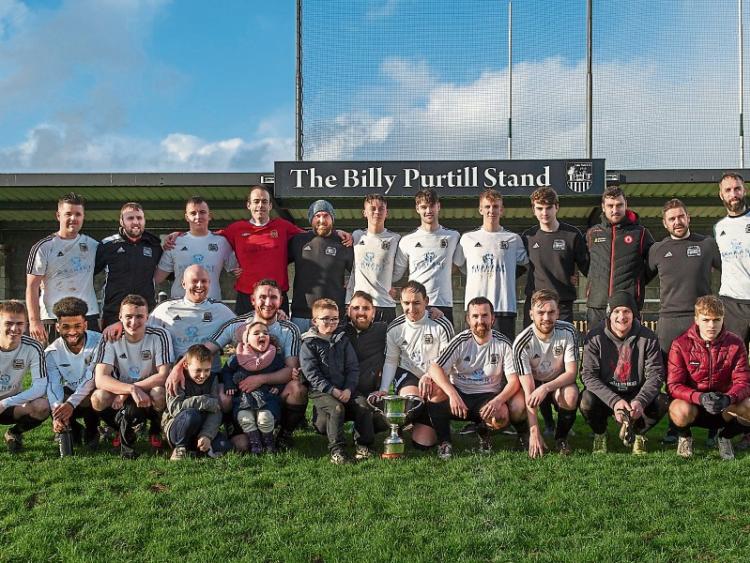 Cahir Park B are Tipperary Division 3 League Champions for 2019

Cahir Park’s seconds finally picked up the Third Division title on Sunday with a big win against Tipperary Town, to add to the silverware that the club’s Youths have already picked up over the past few weeks.

The team had a ding-dong battle all year with Cashel Town at the head of the table, but picking up the final three points that put them beyond catching proved easy enough after Paddy  O’Donnell opened the scoring in the 15th minute. It was to be the first of four for the prolific striker who had a tour de force all season with the latest of a long line of clubs he’s togged out for across the seasons.

Jonas Kerr hit a second in the 20th minute and it was only 2-0 at the break.

With the benefit of the wind at their backs in the second half though, the home side were on top from beginning to end and added five extra goals, three from O’Donnell, a second from Kerr and the final pick of the bunch from Youth player Rhys Chowtie, to put their supporters in seventh heaven.

There was a real end of season feel to this tie at Danny O’Dwyer Park in Solohead on Sunday as both sides closed out their Third Division campaigns in a wind affected game that produced plenty of goals and good fare for the watching supporters.

The home side had the benefit of the wind in the first half and made it count after ten minutes when Declan Riordan fired an unstoppable shot from 25 yards out to the net with the visiting keeper rooted to his line.

Ten minutes later the hosts doubled the lead when they were awarded a penalty kick and it was despatched to the goal by Chris Ryan. And they looked home and hosed on the half hour mark when Riordan got his second and his side’s third goal to put them in a very dominant position going into the half-time break.

But undeterred the Kilsheelan side came into the ascendency in the second half and pulled a goal back on the hour mark thanks to a brilliant strike by Evan Forrester.

Chris Ryan then hit his second for the St Nicholas’s with 20 minutes left to restore their three goal advantage, but with ten minutes left on the clock Roger Doyle brought the curtains down on Kilsheelan’s season when he fired home a second goal from the penalty spot to make it 4-2 on the day.