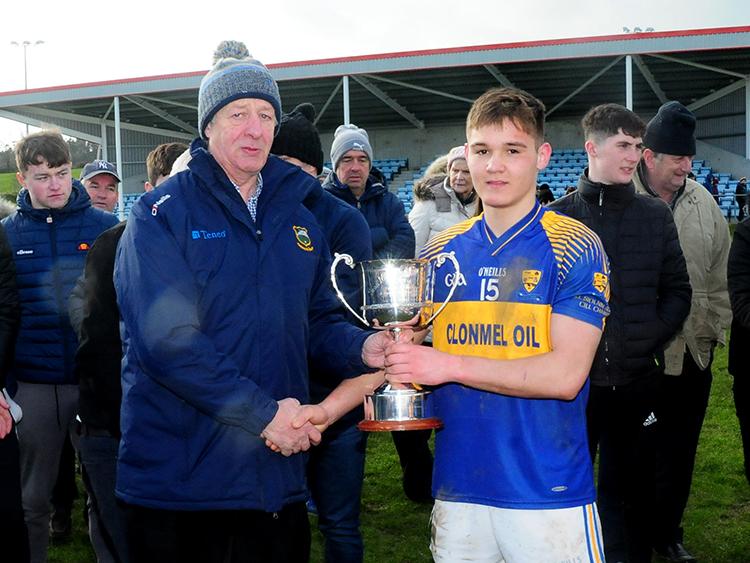 Mark Kehoe inspired Kilsheelan-Kilcash to a thirteen-point win (2-15 to 0-8) over Moyne-Templetuohy-Thurles Gaels in the Tipperary Water County Under-21B Football Championship final played at a windy Bansha on Sunday afternoon. The inter-county hurling star booted over seven points and was also fouled for a penalty early in the second half which broke the back of the game. Moyne Gaels were right in the contest until Barry Kehoe stroked home that spot kick in the 40th minute, but Kilsheelan-Kilcash were dominant thereafter.

A Gearóid O’Connor effort presented Moyne-Templetuohy-Thurles Gaels with an early lead in the third minute, but then Mark Kehoe emerged as a force in this contest when he thundered over three consecutive points from play for Kilsheelan-Kilcash.

The South champions led 0-3 to 0-1 after seven minutes and given the quality of the Kehoe strikes you really feared for the Mid Tipperary men.

In response Conor Bowe played a smart one-two with Ben Ryan before booting over a rousing point in the ninth minute, but three minutes player disaster struck when Seán Martin intercepted a careless delivery out of the Moyne Gaels defence and slid home the game’s opening goal (1-3 to 0-2).

In the 18th minute Moyne Gaels came close to coughing up a second goal when another pass was intercepted deep inside their own territory, but ‘keeper Barry Ryan did especially well to save Mark Kehoe’s effort. And, Moyne Gaels were also thankful to Shane Lowe five minutes later when he bravely blocked Seán Martin’s shot.

Two points within seconds of each other from Conor Bowe (one free) closed the gap to two points and although Mark Kehoe responded with two converted placed balls for Kilsheelan-Kilcash the Moyne Gaels lads looked to have a real fighting chance in this contest. Conor Bowe was now performing well at midfield and his injury time free left just three between them at the break (1-7 to 0-7).

And, Moyne Gaels’ prospects looked even brighter four minutes into the second half when Dean Lawlor booted over a fine effort. The Gaels, however, failed to score for the remainder of this contest.

The key incident in this contest materialised in the 39th minute. Seconds after Cathal Kelly fired over a point for Kilsheelan-Kilcash Mark Kehoe was fouled as he raced through the heart of the Moyne-Templetuohy-Thurles Gaels defence. And, following consultation with his umpires referee Paddy Russell awarded a penalty which Barry Kehoe stroked home (2-8 to 0-8). It is worth noting that the Moyne Gaels players were convinced that the infraction occurred outside of the area.

Kilsheelan-Kilcash played some outstanding football thereafter with points from Barry Kehoe (two, one free), Aidan Keane and Jamie Roche propelling the South champions toward a ten-point lead with forty-eight minutes played (2-12 to 0-8).

Moyne Gaels had ‘keeper Barry Ryan to thank for making another outstanding stop from Barry Kehoe in the 50th minute and Kilsheelan-Kilcash closed out this lop-sided final with efforts from Cathal Kelly, Mark Kehoe and Barry Kehoe (free).

Moyne-Templetuohy-Thurles Gaels never gave up and bravely chased goals late on, but, on this occasion, Kilsheelan-Kilcash proved far too strong for them.