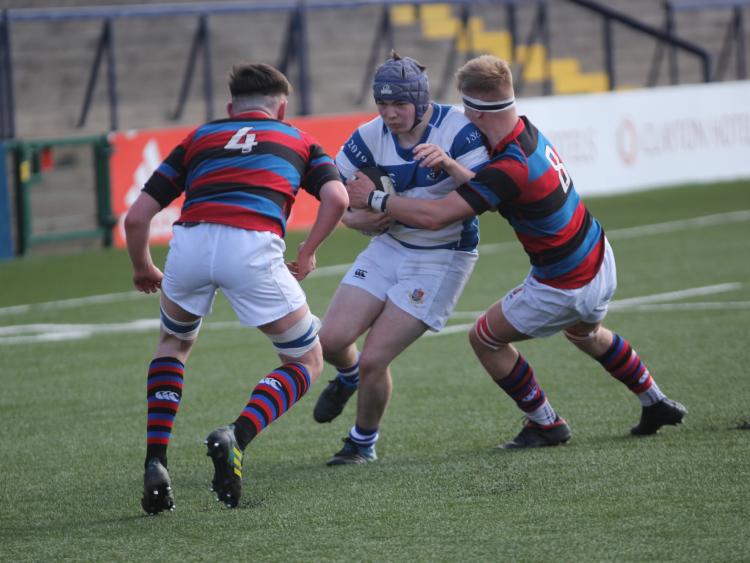 Cian Meaney pictured on the charge for Rockwell College.

Rockwell College had to wait twenty-two years to claim the Munster Junior Schools Cup, but they did so in style and did so with a disciplined and error-free performance at Musgrave Park in Cork on Wednesday, March 27.

This Rockwell team tackled ferociously, showed great line speed and just did not allow the St Munchin's side to settle into their more direct style of play. In truth the result might have been more comprehensive if not for the dogged defence offered by St Munchin's.

Rockwell College elected to play into the breeze and from the kick off the Rockwell number eight Brian Gleeson tackled his opposing number while Tom Downey stole from the ensuing ruck to set the tone for the remainder of the match.

Rory Collins' tactical kicking played a key role in keeping the St Munchin's side at bay. Rockwell had forged 12-7 ahead in a thrilling opening fifteen minutes courtesy of Brian Gleeson barging over the line and then hooker Cian Meaney tunnelling his way through under the posts. Gleeson, Downey and prop Liam Shine hammered the St Munchin's defence time and time again.

St Munchin's scored a converted try in between to show the threat that they presented. Just before half-time Darius Achimugu showed a lightening turn of pace to blaze his way over the line near the touchline to leave the half-time score reading 17-7 in favour of Rockwell.

Rockwell started the second half where they had left off by taking the game to St Munchin's. Rory Collins made an excellent break to the line when weaving through several tackles only to be held up on the line.

Ten minutes later they were duly rewarded with a penalty half way through the second half which Collins slotted over. Time and time again flanker Shane Neville belied his diminutive frame, controlling the game with his clever kicking and winning three penalties.

St Munchin's responded and, following a number of phases near the Rockwell line, tight head prop Gus Harrington went over the line. St Munchin's, however, missed the conversion from a difficult position.

Rockwell played cleverly and Rory Collins continually put the ball down behind the St Munchin's backline to make it difficult for them to establish a foothold. Rory Collins went in under the posts for a try in added time, but the score was disallowed. And, moments later the final whistle sounded to the unrestrained joy of the large Rockwell support.

Rockwell never looked like losing this contest at any stage. Brian Gleeson at number eight was outstanding and was ably supported by Tom Downey, Remi Ediale and Liam Shine in carrying the ball. Hooker Cian Meaney was ferocious in the tackle and cleverly took his score.

Darius Achimugu was a thorn in the St Munchin's side with the ball in hand while team captain Henry Buttimer, Robert Wall and Tom Ross defended stoutly when danger confronted them.

Make no mistake, but this was very much a team performance with all players contributing to this famous success for the Tipperary side.

Coach Danny Lambe complimented the commitment of his team and the superb work done by Owen Cleary over the summer in preparing the side in terms of fitness and also his assistant coach. He also thanked the coaches of the previous two years who had laid the foundation to this historic success.