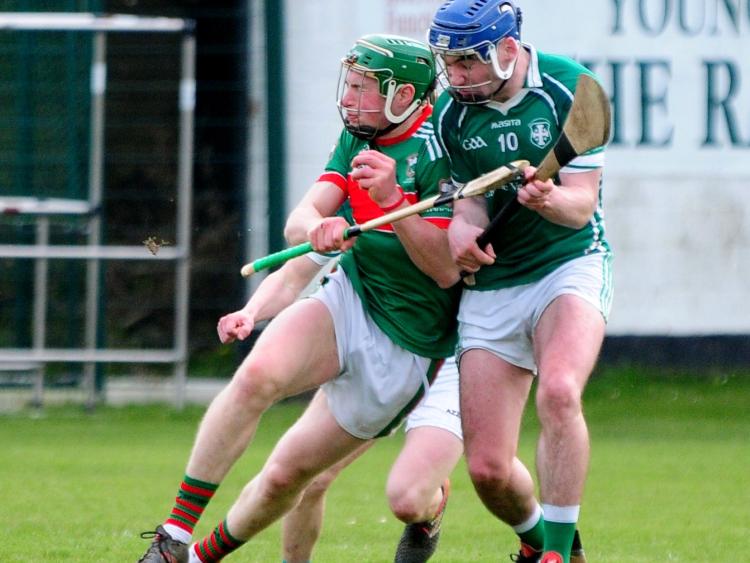 Holders Loughmore-Castleiney did not have it all their own way as they saw off the challenge of Holycross-Ballycahill in the preliminary round of the Centenary Agri Mid Tipperary Senior Hurling Championship at The Ragg on Saturday - a win which presents Loughmore with a quarter-final against Moycarkey-Borris. The remaining quarter-final draw reads as follows: Thurles Sarsfields A v Upperchurch-Drombane, Clonakenny v Drom & Inch and JK Bracken's v Thurles Sarsfields B.

In last year’s semi-final Loughmore recorded a 23-point win over their challengers and for twenty-five minutes on Saturday it looked as though they were on course for a repeat as they forged 1-9 to 0-4 ahead. For the remainder of the hour, however, Holycross more than held their own, but some wasted scoring chances cost them points that could have made all the difference at the finish.

It was a fine contest and while Loughmore will be happy to have a championship win behind them as they face Burgess in the county series this weekend this was far from a vintage Loughmore performance. However, it achieved the desired result and they will expect to drive on from here.

Loughmore lined out without the injured Ciaran and Aidan McGrath, but welcomed Brian McGrath back for his first action of the year. They lost Ciaran Connolly to injury after only two minutes as a lively and fired-up Holycross carried the fight to them with early points from Dara Woods and Bryan O'Mara.

Five unanswered points pushed Loughmore 0-5 to 0-2 clear after ten minutes and when John McGrath set up Liam McGrath for a Loughmore goal in the 21st they were 1-7 to 0-4 clear and cruising. Further points from frees by John McGrath and Brian McGrath stretched their advantage to eight points and the prospect of a whitewash loomed.

However, Holycross-Ballycahill had shown plenty of spirit in those early exchanges and now found their range. Darragh Woods shot four points and Liam Moloney added another to bring them within a goal of their rivals, but John McGrath had the last say of the half with a pointed free for Loughmore and an interval lead of 1-10 to 0-9.

The contest was finely balanced and the question was could Holycross maintain the momentum on the change-over. The response was very positive. After Dinny Ferncombe had made a super save to deny Liam McGrath a Loughmore goal, Evan Sweeney had to do likewise at the other end when Liam Moloney looked sure to score. A Holycross goal then and who knows how the game might have turned. Holycross kept the pressure on and with points from Darragh Woods (three) and Bryan O'Mara were level after thirty-nine minutes.

Was there going to be a shock outcome? Loughmore don't do panic. John McGrath steadied the ship with two points and after Darragh Woods responded for Holycross Brian McGrath, John McGrath and Anthony Ryan raised flags for Loughmore to put them two ahead (1-14 to 0-15).

Darragh Woods and John McGrath exchanged points and in the 55th minute, from a 20-meter free, Darragh Woods went for a goal, but the Loughmore defense stood firm. And, to rub salt in the wound Loughmore broke downfield for another John McGrath point (from a free) to send them four clear (1-16 to 0-15).

Aidan Stakelum’s fine point kept Holycross on the attack, but time was running out. Liam McGrath restored Loughmore’s four-point advantage briefly before Darragh Woods pointed yet another Holycross free to leave them only a goal adrift. However, Loughmore were equal to the challenge and Anthony Ryan rounded off the scoring with a point.

Loughmore-Castleiney will be happy to have successfully negotiated a tricky assignment and confident enough as they seek to retain their Mid crown and chase county honours. They have a lot of talent at their disposal and the emergence of young Eoghan Ryan at midfield increases their options. Brian McGrath made a welcome return after injury, but John Meagher was their top defender with Lorcan Egan not far behind. Liam McGrath was a constant threat in attack with John McGrath’s contribution mostly from frees. Noel McGrath was shadowed by county colleague Cathal Barrett for Holycross with honours even at the end of the hour. Anthony Ryan did very well when introduced.

No doubt disappointed at losing Holycross-Ballycahill have good cause for satisfaction as they turned in a spirited performance which was marked by some fine team play and individual skill. Darragh Woods was their star turn with thirteen points, but they need more from others in the attack. Dinny Ferncombe can be happy with his outing in goal with Gavin Dunne, Bryan O'Mara, Aidan Stakelum. Jamie Woods and Tony Leahy were also to the fore. On this showing they should do well in the Séamus Ó Riain Cup.