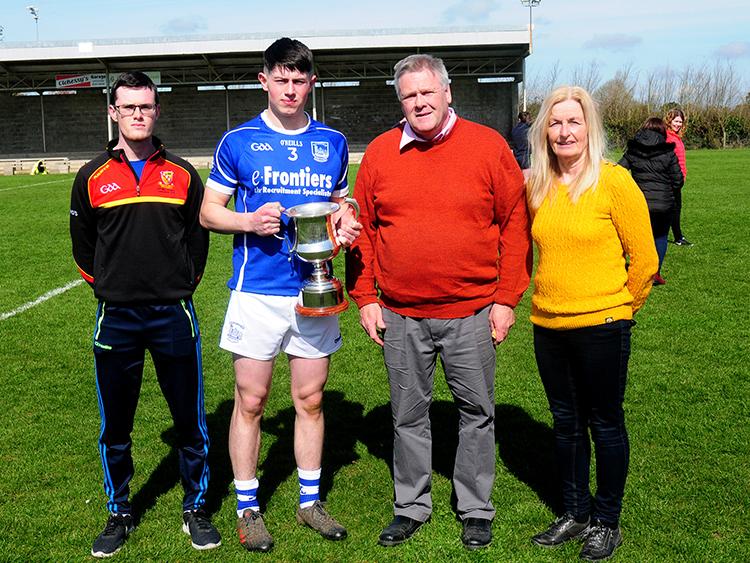 Na Sairsealaigh Óg conjured a blistering display at Littleton on Sunday morning to win the final of the Joe's Taxi & Mini Bus Hire Mid Tipperary Minor A Football Championship with eleven points to spare. It was score-for-score initially, but Na Sairsealaigh Óg created four goal-scoring opportunities during the opening ten minutes and soon took over. Indeed, the quality of the goals scored by Na Sairsealaigh Óg were truly something to behold.

Jack Lanigan (two), Liam McCormack and James Armstrong notched the three-pointers which adorned a real team performance. Captain Cathal Hayes and centre-back Kieran Costello were terrific at the heart of the Thurles defence while up front Eoin Purcell and Jack Lanigan wreaked havoc. In the middle of the field Cian Stakelum looked like a truly accomplished footballer as did wing-back Paddy Stakelum, but the man of the match award on this occasion had to go to corner-forward Liam McCormack who was absolutely outstanding.

Two Kyle Shelly frees presented Moycarkey-Borris with an early lead, but 'keeper Calyum Gooney was asked to pull off terrific saves to deny Liam McCormack (twice) and Jack Lanigan (twice) during the opening ten minutes in a precursor for what was to follow. Efforts from Jack Lanigan and Eoin Purcell tied the game before Darragh Stakelum and Joe Dwan combined and Jack Lanigan delivered a left-footed finish in the 13th minute (1-2 to 0-2).

Moycarkey-Borris responded to the challenge posed with points from Kyle Shelly (two frees) and Max Hacket to tie the game. A cracker from Cian Stakelum and an excellent Eoin Purcell effort forced Na Sairsealaigh Óg two clear, but the home side responded once more with points from Kyle Shelly and Darren Flood to tie the game before Liam Cormack sparked a move which culminated in a second left-footed finish for Jack Lanigan. Kieran Costello then thundered over a late point and Na Sairsealaigh Óg led 2-5 to 0-7 at the break.

Whatever hopes Moycarkey-Borris may have had of mounting a second half comeback were brutally smothered by Na Sairsealaigh Óg during the opening six minutes of the second half when efforts from Jack Lanigan, Eoin Purcell, Cian Stakelum, Kieran Costello and Joe Dwan left nine between the sides (2-10 to 0-7).

Moycarkey-Borris' first score of the second half (Darren Flood in the 41st minute) preceded a third goal for Na Sairsealaigh Óg - this time Jack Lanigan provided a smart assist and Liam McCormack the assured finish (3-10 to 0-8).

Moycarkey-Borris rallied with efforts from Kevin Hayes and Kyle Shelly (Shelly's effort was deflected over by an alert Lorcan Cummins) before Liam McCormack converted a placed ball for Na Sairsealaigh Óg (the Thurles lads scored 4-13 from play; just 0-2 from frees).

Corner-back Conor Stapleton bravely blocked an effort from Moycarkey-Borris' Max Hackett in the 57th minute, but the home side did manage a three-pointer in second half injury time through Darren Flood while Liam McDonagh also added a late point to his side's tally.