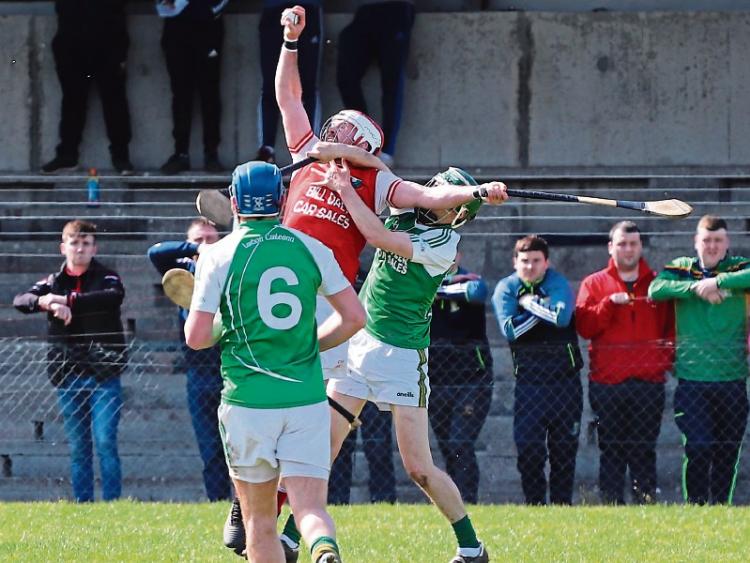 Played in Sean Treacy Park on a lovely sunny morning both sides were in with a shout as the clock ran down with even the prospect of the game going to extra-time. Lattin/Cullen Gaels seemed to have that bit more but struggled to get away from a Galtee Rovers side who scored goals at crucial times to keep them in the game.

The game didn’t take long to get going when Mark Russell pointed the opening score from a placed ball after 30 seconds. This was quickly followed by a point from his midfield partner Shane Neville. When Daire Egan gained possession he found a gap in the Gaels defence to raise the game’s first green flag. Neville and Russell continued their good start with another point each as Lattin/Cullen Gaels retook the lead. The lead was out to three points when Kevin Franks got his first and Shane Neville his third point of the game. Lattin/Cullen Gaels were finding scores easier but Galtee Rovers were keeping in touch. Tony O’Brien pointed two frees in between a Patrick O’Donoghue effort at the other end. Shane Neville who was making good runs up the right hand side added another point. The game was all level in the twentieth minute when Colin Morrissey’s shot dropped short and was flicked to the net by Tony Egan. Shane Power’s good work in defence setting up the move. Yet again Lattin/Cullen Gaels responded. Mark Russell hit a brace of points and Pat Power got his name on the score sheet. Tony O’Brien cut the deficit with another pointed free. With three and half minutes remaining in the half, Liam Kavanagh cut through on goal passing to the unmarked Eoghan Brennan who raised green flag number three for Galtee Rovers. Lattin/Cullen Gaels tried to respond but failed to hit the target. They could have had a goal just before the break when Kevin Franks got in but his effort went wide of Eoin White and the post. Tony O’Brien pointed from play, which was Galtee Rovers first point from play in the game just before the half time whistle to see Galtee Rovers ahead 3-4 to 0-11.

Lattin/Cullen Gaels introduced Barry Grogan to full back to help shore up the defence while Cathal Dillon came into the half forward line. Shane Neville and Ed O’Meara levelled the game in the opening three minutes of the game. Shane Neville was having good luck down the right hand side and he added another point to put Lattin/Cullen Gaels ahead. While Galtee Rovers were struggling in front of the posts, Mark Russell and Cathal Dillon extended the Gaels advantage at the other end. Galtee’s rallied and Tony O’Brien added their first score of the half with a pointed free which was followed by a long range free from Colin Morrissey. Tony O’Brien got his and Galtee Rovers second point from play to tie up the game with eleven minutes to play. Shane Neville again went down the right and pointed but Kevin Power levelled the game again. With six minutes to go Galtee Rovers were ahead when Colin Morrissey pointed. Cathal Dillon would have a major say in the final three minutes pointing three frees. The first two had Lattin/Cullen Gaels up by one and they defended stoutly to deny Galtee Rovers an equaliser before working the sliotar down field where they worked a free which was pointed by Dillon. Laurence Coskeran had the last say of the game when he cleared for a sideline as the long whistle went. Lattin/Cullen Gaels coming out on top by two points and setting up a semi-final with Golden/Kilfeacle.

Mark Russell and Shane Neville proved a very strong midfield partnership for Lattin/Cullen Gaels. The latter hit 0-7 from play and caused major problems down the right flank. Cathal Dillon made an impact when introduced especially at the end hitting the last three points from placed balls. Laurence Coskeran and Thomas Hanley were strong in defence but the introduction of Barry Grogan at full back steadied the full back line.

Eamon O’Connell and Shane Power were solid in defence for Galtee Rovers while in the forwards Colin Morrissey always proved a presence in possession. Tony O’Brien finished their top scorer with six points.