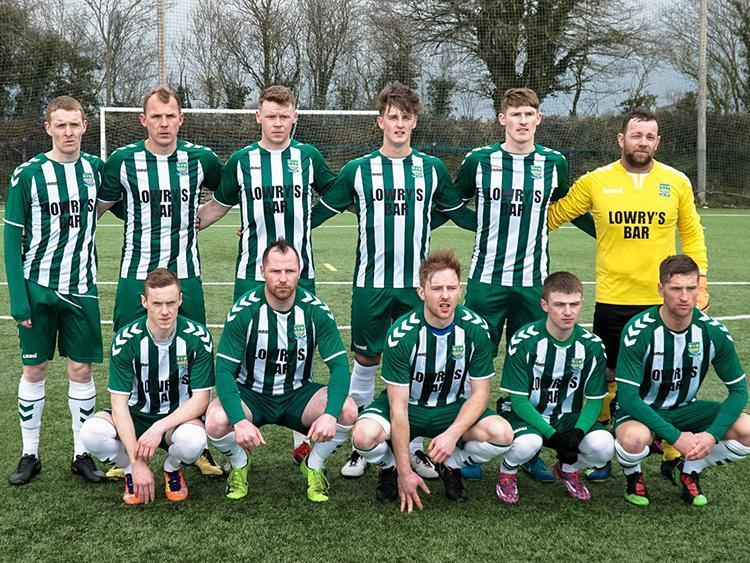 St Michael’s are through to the New Balance FAI Junior Cup final following the Saints’ 2-0 win over Glengad United at Cooke Park in Tipperary town on Sunday afternoon. This was a disciplined performance from the outfit managed by James Walsh.

That said the visitors did start brightly and had Aidan Walsh on his toes and off his line to clear a potentially dangerous through ball as early as the second minute.

This semi-final was a tense affair with the Saints winning a frees and Glengad trying to hit on the counter. From one such free Seán Guerins headed just over the bar on nineteen minutes and Jimmy Carr played in Willie Armshaw two minutes later, but the ball was forced out to touch.

Meanwhile Stephen McLaughlin on the wing and Terence Doherty were showing good touches for Glengad and both of these players combined on the half hour mark to create chance up for McLaughlin, but he shot wide.

Two minutes later the visitors were left to rue that missed chance when Jimmy Carr picked up a loose ball in the middle of the pitch and his strong run took him into space before he fired home off the post leaving the Donegal ‘keeper stranded to put the hosts a goal in front.

Glengad United came out all guns blazing in the second period as they tried to bulldoze their way back into the game, but this was where the much-vaunted home defence stepped up to the plate. A back line, which has only conceded three goals all year in the league, illustrated their ability as they continually snuffed out all efforts from the visiting side.

United were picking up a lot of ball in midfield and controlling the game for the opening twenty minutes of the half, but they simply could not capitalise on the possession earned to force an equaliser. And, as the half wore on the Saints once again took the upper hand and began to push the Donegal side deeper into the own half.

The game was decided six minutes from time when following a Willie Armshaw cross David Slattery put pressure on Matthew Byrne who clipped him inside the area and the referee had no hesitation in pointing to the spot. Joey Mulcahy converted the penalty to make it 2-0 and the Saints were back in the final for the first time since 2014 when they won their historic second FAI Junior Cup title.

Jimmy Carr was awarded the man of the match award, but was pushed hard by John O'Brien, Paul Breen and Seán Guerins.

A huge day now beckons for the club on Saturday, May 11 at the Aviva Stadium, Dublin.

St Michael’s can now not be caught at the summit of the Tipperary South & District League Premier Division and are duly crowned league champions for the fourth successive year.

The Saints have already completed the league double over Clonmel Celtic, Clonmel Town, Vee Rovers, Cahir Park and Old Bridge. St Michael's have also beaten Peake Villa and Tipperary Town while their only defeat of the season materialized away to Bansha Celtic. Therefore the Saints' title run-in comprises of a home game against Bansha Celtic, home to Tipperary Town and away to Peake Villa.

St Michael’s have also progressed to the semi-finals of the Tipperary Cup.

The Saints’ Tipperary Cup quarter-final victory over Bansha Celtic proved a sweet one for St Michael’s. Their only hic-cup this season occurred in the John Delaney Cup (a pre-season tournament). St Michael's beat Borroway Rovers (4-2) and Blackcastle Templemore Harps (2-0) before losing the final of that tournament to Bansha Celtic (1-3). And, Bansha Celtic also presented the Saints with their only league defeat this season.

In the first round of the Tipperary Cup St Michael's saw off the challenge of Cashel Town B (5-0) before accounting for Peake Villa (4-1) in the second. But in the recent Tipperary Cup quarter-final Bansha Celtic managed to trouble St Michael’s once more. The contest finished nil-all before the Saints won a sudden death penalty shoot-out 4-3 with Richie Ryan, John O’Brien, Jimmy Carr and Christopher Higgins converting the spot kicks. The St Michael’s B team are also through to the semi-finals of the Tipperary Cup having seen off Glengoole United in the last eight (3-0) four thanks to goals from Danny O’Brien (two) and Collie O’Dwyer.

St Michael's have been draw to face Geraldines (Limerick District League) in the semi-finals of the Munster Junior Cup.