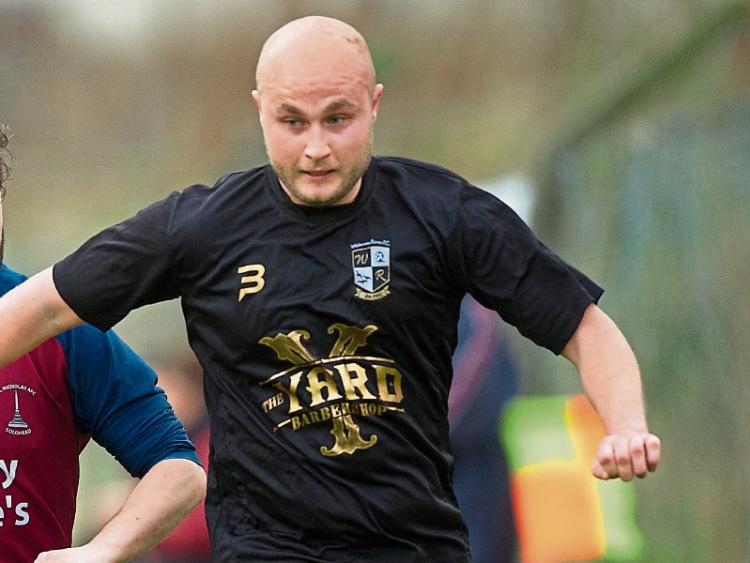 Jason Barnes in action for Wilderness Rovers earlier this season. Their win in the play-off against Cullen/Lattin secures their place in Division 1 for 2020/21.

Last Sunday saw the players of  Wilderness Rovers and Cullen Lattin face-off to see who were going to be plying their trade in the First Division next season and who were going to slip back down through the relegation trap door.

As could be expected the game was tough and tight right from the start, with Cullen having perhaps the best of the early chances, without ever really testing the Rovers keeper.

James Riordan did have a chance on the half hour mark but his shot went harmlessly wide in the end. As often happens when a team doesn’t make the best of their chances they get punished on the break and this is what transpired ten minutes before half-time when the Clonmel side broke quickly and Shane O’Meara scored the vital opening goal.

This was the score at the break and in the second half the Cullen side threw everything bar the kitchen sink at their opponents in a bit to get back on level terms. They thought they did so 15 minutes from time when Brendan O’Sullivan had the ball in the Wilderness Rovers net but the effort was ruled out for offside.

Chances came and went also for Pakie Farrell and Eamon Landers, but eventually Wilderness Rovers held out and took the final spot in the First Division next year on a 1-0 scoreline.