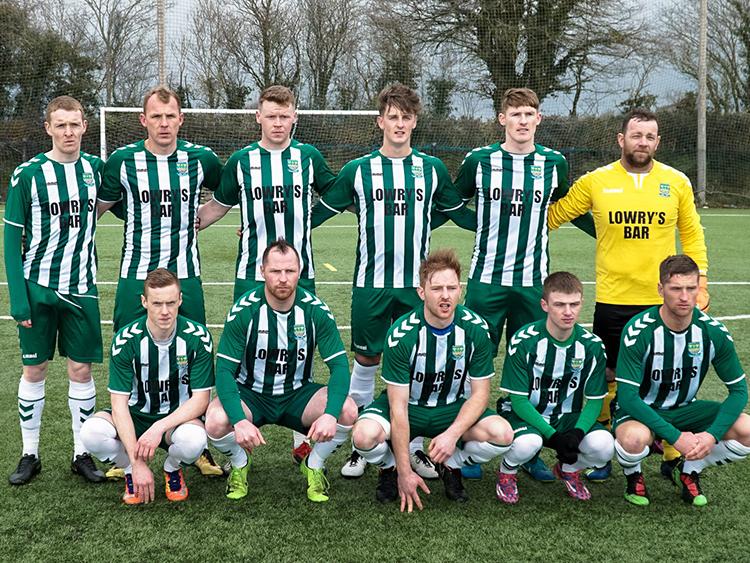 The St Michael's team which beat Evergreen in the FAI Junior Cup quarter-finals.

On Sunday, April 21 an extraordinary St Michael's season continues when Tipperary's super Saints take on Newmarket Celtic (Clare & District League) in the Munster Champions Trophy final at Two-Mile-Borris (kick-off 3pm). The Tipperary South & District League Premier Division champions would really appreciate your support for what is likely to be a thrilling clash. Indeed, the sides encountered one another earlier this season when, after a high quality clash, the Saints beat Celtic 2-0.

In the Munster Champions Trophy St Michael's have already accounted for Abbeyfeale United (2-0) and Carrick United (5-0) in the competition which pits all of the respective junior league champions in the province against one another.

And, the outfit managed by James Walsh are chasing an extraordinary five trophies this season with one already in the bag.

St Michael’s are through to the New Balance FAI Junior Cup final following the Saints’ recent 2-0 win over Glengad United at Cooke Park in Tipperary town. This semi-final was a tense affair before goals from Jimmy Carr and Joey Mulcahy (penalty) booked a place in the decider at the Aviva Stadium.

The last eight in the competition pitted St Michael's against the might of Evergreen in Kilkenny and the Saints prevailed on a 1-0 scoreline. In the last sixteen St Michael's beat Mervue United 2-1 while this outstanding Saints team, who won the competition outright as recently as 2014, saw off the challenge of last season’s semi-finalists Newmarket Celtic (Clare & District League) in the last thirty-two (2-0). Previous to that encounter St Michael's beat Leitrim's Manorhamilton Rangers (2-1), Tipperary Town (7-0), Old Bridge (10-0) and Mullinahone FC (6-0).

St Michael's have been draw to face Geraldines (Limerick District League) in the semi-finals of the Munster Junior Cup on the week-ending Sunday, April 28.

In the quarter-finals St Michael's recently made the trip to Limerick to take on and beat Kilmallock United (4-1) in the last eight of the prestigious competition. In the fifth round (last sixteen) the Tipperary South & District League champions hosted and beat Cork outfit Lakewood Athletic 3-1. Thus far the Saints have also beaten Carrick United B (2-0), Clonmel Town (4-1), Cahir Park (3-0) and Wilderness Rovers (2-0) to reach this stage of the competition.

St Michael’s have also progressed to the semi-finals of the Tipperary Cup. The Saints’ Tipperary Cup quarter-final victory over Bansha Celtic proved a sweet one for St Michael’s. Their only hic-cup this season occurred in the John Delaney Cup (a pre-season tournament). St Michael's beat Borroway Rovers (4-2) and Blackcastle Templemore Harps (2-0) before losing the final of that tournament to Bansha Celtic (1-3). And, Bansha Celtic also presented the Saints with their only league defeat this season.

In the first round of the Tipperary Cup St Michael's saw off the challenge of Cashel Town B (5-0) before accounting for Peake Villa (4-1), but in the recent Tipperary Cup quarter-final Bansha Celtic managed to trouble St Michael’s once more. The contest finished nil-all before the Saints won a sudden death penalty shoot-out 4-3. The St Michael’s B team are also through to the semi-finals of the Tipperary Cup having seen off Glengoole United in the last eight (3-0).

St Michael’s were officially crowned Tipperary South & District League Premier Division champions following an 11-0 win over Tipperary Town on Tuesday, April 16. The Saints have already completed the league double over Clonmel Celtic, Clonmel Town, Vee Rovers, Cahir Park, Tipperary Town and Old Bridge. St Michael's have also beaten Peake Villa while their only defeat of the season materialized away to Bansha Celtic. The Saints' remaining league games comprises of a home game against Bansha Celtic and away to Peake Villa.