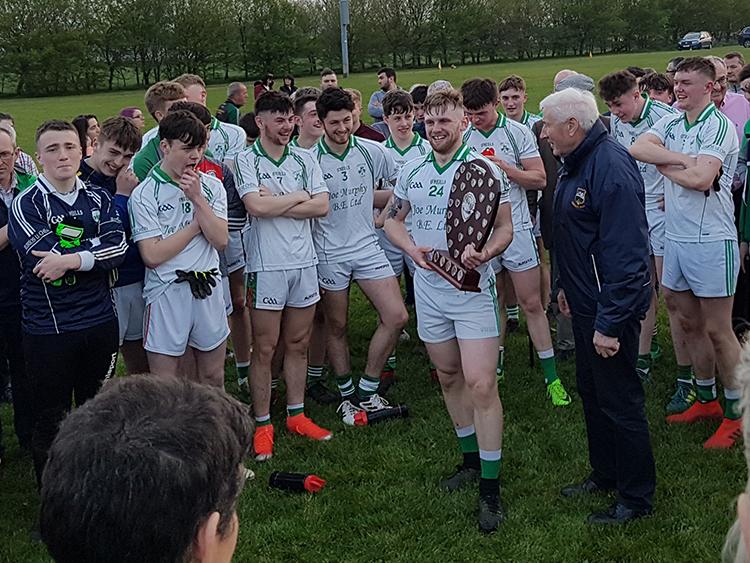 Although the playing of this divisional decider was significantly delayed this season this final was worth waiting for in terms of the entertainment value it provided. These sides were evenly-matched for the most part, but Borrisokane centre-forward Liam Cleary appeared the most accomplished operator on the field of play.

Michael Heenan and Michael Kelly were also outstanding for a Borrisokane side which led by a single point (0-3 to 0-2) at the interval and by two (0-9 to 0-7) with a minute of normal time remaining when an Eoin Tynan goal presented Inane Rovers with the lead. And, in a dramatic finish to this tussle Liam Cleary managed to land a free and see a spot kick saved before the centre-forward booted over the resultant ’45 to win this final for Borrisokane in dramatic circumstances.

Inane Rovers started well and scooted into a 0-2 to no-score lead thanks to efforts from Fionn Ryan and Eoin Tynan. With twenty-one minutes played and two points adrift Borrisokane needed to muster a response and did so when closing out the half with three successive efforts - Liam Cleary converted two frees while Jack Mahoney scored an absolute beauty from the outside of his right boot to present Borrisokane with a 0-3 to 0-2 interval lead.

The sides traded efforts immediately after the break and there was still a point between them with twenty minutes to play (0-5 to 0-4) - following efforts from Liam Dooley, Liam Cleary (free) and Darragh Tynan (two frees) - when Aidan Booth’s curling left foot shot almost found the Borrisokane net in the 43rd minute; Booth also saw another stinging effort saved by ‘keeper Jason Quigley.

A composed Borrisokane attack culminated with a terrific Michael Heenan point in the 44th minute before Darragh Tynan and Liam Cleary traded frees. Then, with eight minutes to play, Dylan Hogan set up Darragh Tynan for a thundering right foot point from distance to close the gap, once more, to one (0-7 to 0-6).

Borrisokane created a goal-scoring opportunity of their own in the 53rd minute when, following a flowing move which featured Michael Heenan and Liam Cleary, a misfortunate Dylan Power steered wide from close range.

Placed balls were then exchanged, but when Oisín Larkin created an opening for Michael Heenan to boot Borrisokane into a two-point lead off his left (0-9 to 0-7) in the 57th minute Inane Rovers appeared doomed. That is until the 59th minute when Darragh Tynan conjured a goal-scoring opportunity for Colman Treacy; although Treacy’s shot skewed off target it landed in the arms of Eoin Tynan who finished from close range (1-7 to 0-9).

Four minutes elapsed before another Liam Cleary free tied up the game in the 63rd minute. Borrisokane then won the subsequent kick-out and carved open the Inane Rovers defence before Conor Gavin was fouled for a penalty. Liam Cleary opted to go for goal from the spot kick, but Inane Rovers ‘keeper Brian Parlon saved brilliantly at the expense of a ’45 which Liam Cleary booted over.