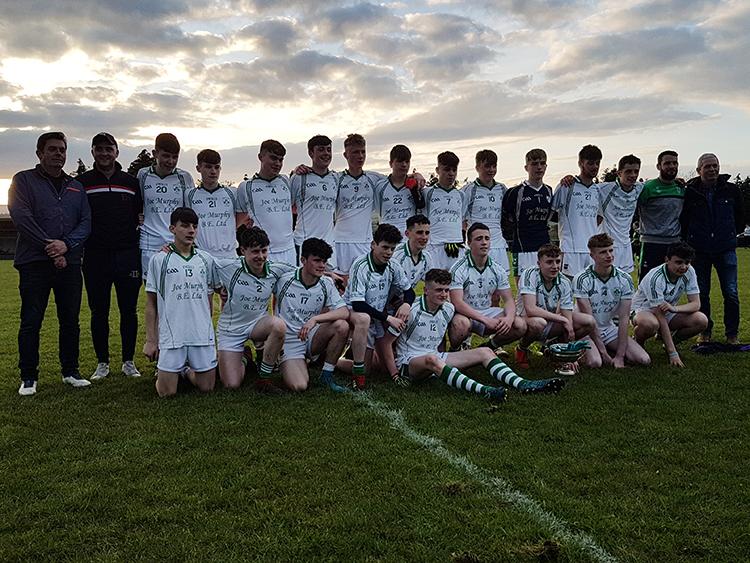 The Borrisokane panel of players pictured with their management team following their North Tipperary Minor B Football Championship final win over Portroe at Shallee on Friday evening.

Borrisokane proved themselves the more accomplished side in Friday evening’s North Tipperary Minor B Football Championship decider played at Shallee against Portroe and duly added an under-18 divisional title to the under-21A football crown which the club recently won following a final battle with Inane Rovers.

Wing-back James Hough, midfielder Roan Murphy, wing-forward Kevin Cleary, centre-forward Oisín Larkin and the classy Conor Ryan represented the key players for Borrisokane while Peter Rainsford, Andrew Ferris and Sam Madden were outstanding for a Portroe side who, despite taking an early lead, trailed by three points at the break (0-5 to 0-8).

With seven minutes to play Borrisokane led by six (0-15 to 0-9) and although Portroe rallied late in the contest Borrisokane were good value for this win. That said had one of a number of Portroe goal-scoring chances found the back of the net we may well have been treated to a grandstand finalé.

Sam Madden booted over two points (one free) during the opening five minutes to propel Portroe into a 0-2 to no-score lead. Oisín Larkin responded for Borrisokane before Niall Quinn and then Kevin Cleary saw their respective goal chances saved by an alert Luke Creamer.

Oisín Larkin and Sam Madden traded frees before Conor Ryan converted a placed ball in the 16th minute to tie the game (0-3 apiece). Borrisokane, however, were playing the better football and pressed the Portroe kick-out to significant effect - Borrisokane proceeded to dominate the remainder of the half which they won 0-5 to 0-2.

Sam Madden was responsible for both of the Portroe scores during this period while Oisín Larkin, Jack Mohoney, Roan Murphy, Kevin Cleary and Conor Ryan booted over a series of eye-catching points for Borrisokane. In the 25th minute Roan Murphy landed the score of the game when converting a terrific shot from the outside of his right boot.

During the opening eight minutes of the second half Borrisokane kicked five points without reply. Niall Quinn set up Kevin Cleary for the first of this batch with a glorious first-time flick while Jack Mohoney (two), Conor Ryan and Cleary (once more) added the others (0-13 to 0-5).

Portroe moved wing-back Andrew Ferris further forward and his enterprising play in the middle third had a significant impact on the concluding minutes of this contest.

In the 40th minute Ferris set Sam Madden up for a smashing point and was then fouled for a converted free a minute later. Madden landed another free in the 43rd minute and the midfielder turned provider in the 48th when Madden created the room for Andrew Ferris to reduce the deficit to a manageable four (0-13 to 0-9).

This contest then arrived at a critical juncture - in the 49th minute Barry Connaughton’s stinging shot was deflected onto the Borrisokane crossbar and Sonny Dower’s follow-up was bravely blocked.

A goal at that stage may well have wrenched this final in an entirely different direction, but Borrisokane re-grouped and Conor Ryan belted over efforts in the 52nd and 53rd minutes to leave six points between the sides (0-15 to 0-9).

Sam Madden (on three occasions) and Brian Keating went for goal late in this contest and although Madden (free) and Patrick Finn managed late points for Portroe it was not nearly enough to rescue the situation.