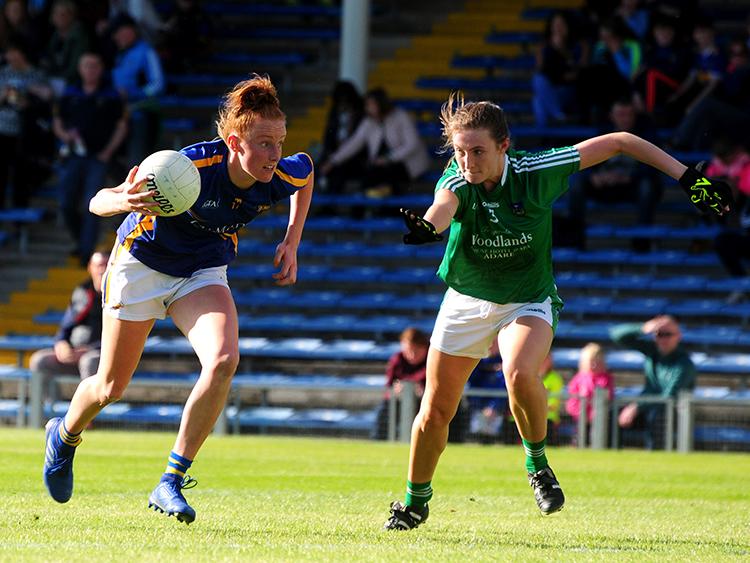 A virtuoso performance by Cahir’s Aishling Moloney (who scored a whopping 4-13) inspired Tipperary to a rout of Limerick in the opening round of the Munster Intermediate Ladies Football Championship at Semple Stadium, Thurles on Saturday evening.

Limerick (the 2018 junior All-Ireland champions) were expected to pose some problems for the Tipperary girls, but from the very beginning there was only one team in it as the home side ran their opponents ragged.

By half-time Tipp were in an unassailable position as they swept Limerick aside to forge an interval led of 4-13 to 0-3 with an exhibition of quality football which underlined the vast gulf between the sides. Indeed, it could be argued that the game was all over after fifteen minutes when Aisling McCarthy netted after being set up by Aishling Moloney to force Tipperary 1-7 to no-score clear.

The Tipp girls were rampant with Moloney the orchestrator in-chief; she bagged 1-8 in the first half with three of the points from frees. She also had another goal disallowed for an infringement in the 13th minute and two minutes later the woodwork denied her a goal so that her 26th minute green flag was a deserved reward for her top-drawer performance.

Aisling McCarthy (in the 15th minute), Anna Carey (18th) and Anna Rose Kennedy (19th) got the other Tipperary goals in a first half display full of energy and high quality football.

Purists will argue that this encounter did nothing for either team. Limerick’s morale will have taken a severe battering while Tipperary would have preferred a more testing challenge before their next outing against Clare. But despite the mismatch Tipperary manager Shane Ronayne and his back room team have to be happy with the enthusiasm and level of performance shown by the Tipp ladies.

As stated Aishling Moloney is a class act in attack, but this is not a one-woman team. Samantha Lambert, Maria Curley, Anna Rose Kennedy, Aisling McCarthy and Róisín Daly all contributed their share as did the subs who were sprung together after forty minutes.

Limerick kept at it to the finish, but were out of their depth. Ava Hartigan, Catriona Davis, Loretta Hanley and Cathy Mee were their top performers.