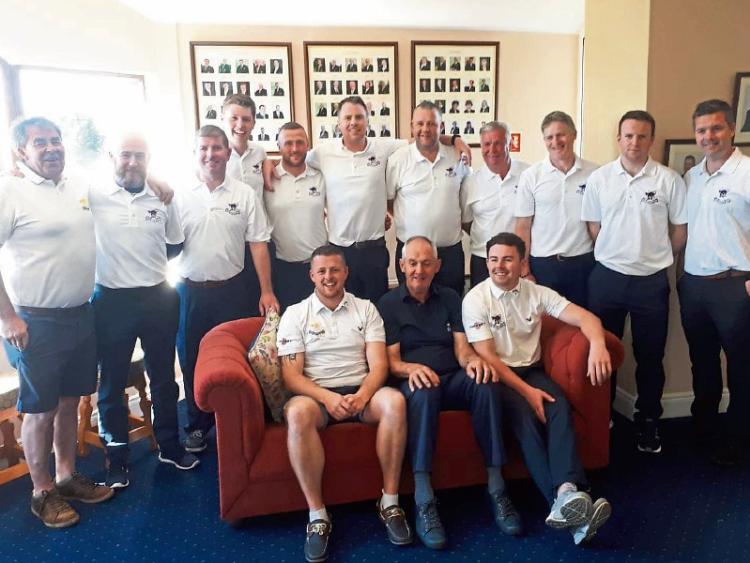 Cahir Park was honoured to be the chosen venue for the East Munster Area Final of The Jimmy Bruen Shield 2019.

Eight teams participated on Saturday. The final was held on Sunday. For the first time in living memory, Cahir Park were the victors, beating Clonmel. It was a memorable weekend. A huge amount of preparation went into its success. The panel were practising at least twice a week for six weeks, under the watchful eyes of their manager Stephen Flannery and the selector Jimmy Flannery.

For Jimmy Flannery this will weekend will be indelible in his mind. He has been soldiering in this tournament for more years than he might care to admit and this year when we finally won the area final he had a son as manager and a son who played. They were joined by Susan Carey on the fairways and she brought great experience to the setup.

There were a lot of supporters who helped strengthen the resolve of the players.

Cahir Park President Jim Cantwell was present all day on Saturday and said he had never witnessed sub-participation and was so pleased to witness same. It was evident that each member of the panel was trying hard to impress to gain their place. But when they were not picked for a match they accepted it and went on to cheer the players chosen. The atmosphere was electric.

All players commented on the condition of the course. The fairways were like carpets and the greens were superb. Great credit is due to the Head Green Keeper, Declan Walsh and his team and to the Course Manager, Liam Neligan. They all worked closely with the team Manager, Stephen Flannery and used their local knowledge.

The most spectacular golf for the spectators came from the third pairing of Ian (Bunty) Flannery and Eamon Williams. In their final round on the 16th, the tee was in a shortened position. The match was flat. Clonmel teed off first and landed on the green about ten feet from the hole. Ian teed off and left it short of the green! Eamon Williams confidently approached the ball and chipped it into the hole for a birdie. Then Clonmel’s youngest player takes out his putter and confidently sinks the putt. Huge applause from the spectators with comments like “you wouldn’t see it as good on TV”.

Then on the 17th the Cahir pair went one up. On the 18th Eamon Williams left the ball on the edge of the 18th and Ian confidently struts up to the ball and chips it into the hole to win the match for the home team. The applause was heard on the bridge at the 16th. We on to win the match 3½ to 1½. The euphoria was palpable!

Cahir Park  will now play Waterford Castle on Thursday, May 23 at 4 pm.

Everyone retired to the clubhouse for dinner. Great thanks are due to Keith, our Bar and Restaurant Manager and his staff who catered superbly for members and guests over the weekend. There was breakfast, lunch and dinner available each day. Compliments to the kitchen!