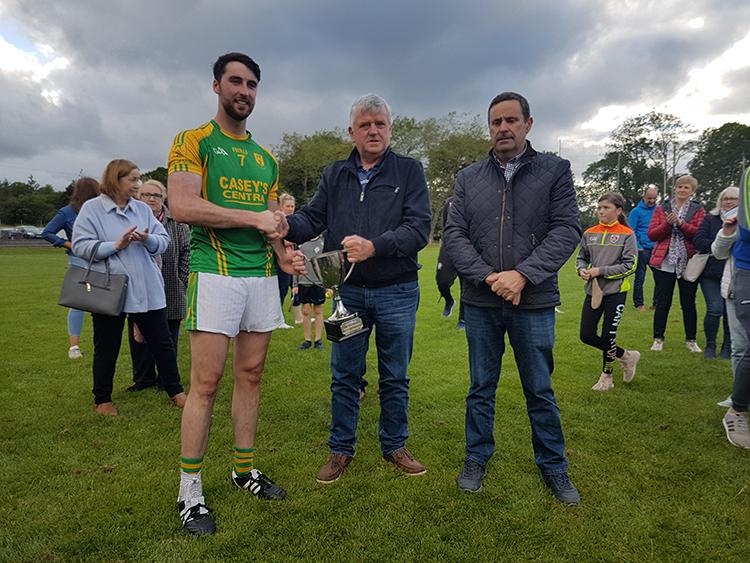 Toomevara won the North Tipperary Junior A Hurling League title at Kilcolman on Sunday evening when the Greyhounds proved too cute for fourteen-man Nenagh Éire Óg in a really entertaining contest.

The dismissal of Darragh Walsh for a second bookable offence in the 50th minute certainly had an impact on this final as Nenagh Éire Óg trailed by just a point at that juncture. The prevailing pattern of the game, however, was going in Toomevara’s favour and it would be unfair to argue that Walsh’s dismissal cost the Blues the game. Indeed, Toome were very smart on the line and made a critical tactical switch during the opening half which may well have wrenched this decider in their favour.

Playing with a stiff breeze at their backs Nenagh Éire Óg led 0-11 to 0-5 with twenty-six minutes played, but Toomevara switched to a three-man midfield, flooded the middle third and won the remainder of the half 0-4 to 0-1. The Greyhounds trailed by just three points at the break (0-9 to 0-12) and adopted a very sensible approach to the second half. Despite now playing with the breeze Toome pulled their half-forward line out, made life very difficult for Éire Óg and also created room for their inside forward line.

Nenagh Éire Óg scored 1-3 in the second half with just one point coming from play and to be fair Shane Maher’s goal in the 45th minute was down to a misfortunate goalkeeping error. Meanwhile Toomevara went to town and notched 0-13.

With Seán Phelan flying it for Nenagh Éire Óg at midfield the Blues started really well and led 0-6 to 0-2 with just eight minutes on the clock. Darragh Walsh, man of the match candidate Shane Maher (0-2), Mark Tuite (0-2 frees) and Cian O’Farrell were responsible for the Nenagh scores while Conor O’Meara and David Young responded for Toome.

Toomevara rallied thanks to two awkward Shane Nolan frees and had the gap down to two points (0-7 to 0-5) entering the second quarter, but Éire Óg then hit four without reply to scoot six clear. Shane Maher, Mark Tuite (free), Anthony Walsh and Seán Phelan (his second of the evening) were responsible for the Nenagh scores (0-11 to 0-5).

Over sixteen minutes of first half injury time were played as the misfortunate Toomevara centre-forward Colm Canning was removed to hospital via ambulance from the field.

And, it was the Greyhounds who dominated the concluding minutes of the half when Shane Nolan (two), Paddy Grace and Conor O’Meara drilled over efforts with only John Cahalan managing a response for Éire Óg (0-12 to 0-9).

Twelve minutes into the second half Toomevara were level (0-13 each) - Shane Maher landed a point for Nenagh, but his effort only managed to briefly check the advance of the Greyhounds as Shane Nolan (two, one free) and Seán Flaherty (two) landed scores.

Willie Coffey set up David Young for one of the points of the game in the 43rd minute and then just seconds later Conor O’Meara notched a cracker from play to force Toomevara two clear (0-15 to 0-13).

Nenagh Éire Óg desperately needed a little encouragement and found a real tonic of a score in the 45th minute when misfortunate Toome ‘keeper Rory Brislane got his angles wrong, Shane Maher intercepted his errant puck-out and the full-forward made no mistake from close range (1-13 to 0-15).

That strike did not appear to upset Toomevara unduly, however, and following points from Conor O’Meara, man of the match Shane Nolan and Alan Ryan they led 0-18 to 1-13 with fifty-two minutes on the clock.

Michael McNamara landed a long-range free in response, but Alan Ryan added another Toomevara point soon after before McNamara tripped Willie Coffey as a Toome effort was drifting wide; Shane Nolan converted the resultant free and when David Young and Willie Coffey added further efforts the Blues were five adrift (0-22 to 1-14).

In injury time Donnacha Quinn drilled over an Éire Óg free and although Mark Tuite went for goal from a late 21-yard free (saved) Toomevara were good value for their four-point margin of victory.