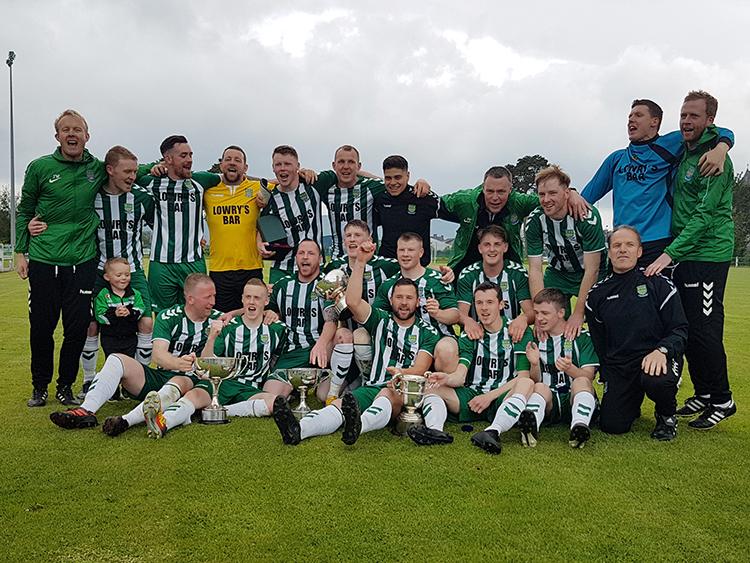 St Michael’s added another chapter to their extraordinary season on Saturday evening at Cooke Park in Tipperary Town when the side managed by James Walsh collected their fourth trophy of the season - this time the Saints won the Tipperary Cup final. St Michael’s beat Clonmel Town in the decider (2-1) and celebrated on the pitch afterward with all four trophies won by the Tipperary South & District League club (the Tipperary Cup, TSDL Premier Division trophy, Munster Champions Trophy and the Munster Junior Cup). And, St Michael’s still have the FAI Junior Cup final to look forward to.

To be fair Clonmel Town found themselves at a severe disadvantage on Saturday evening - they were lacking in match practice against a St Michael’s outfit who were absolutely mad for road. That said Town worked hard and made life as difficult as possible for the Saints before giving their hosts a real fright when Keith Cashman struck for a breakaway goal against the run of play with fourteen minutes of normal time remaining.

Over the course of the game, however, St Michael’s proved themselves the more accomplished side and probably deserved to win by more.

The Saints took the lead in the tenth minute - following a foul on Jimmy Carr Shane Ryan swung in a left-footed delivery from the right flank and Richie Ryan headed home at the far post.

Clonmel Town elected to defend deep and although St Michael’s had all the time in the world to work through their phases of play and pick their passes the visitors to Cooke Park coped reasonably well until the 28th minute when John O’Brien sparked a sensational attack; O’Brien strode forward, played a one-two with Shane Ryan and then set up Willie Armshaw. Cruelly, Armshaw’s curling effort found the right hand post.

Four minutes before the break Jimmy Carr played in Shane Ryan, but Clonmel ‘keeper Dylan Guiry performed the first of a series of top class saves.

Clonmel Town looked physically shattered as they walked off the field at the break and the pace of the game was starting tell early in the second half when Shane Ryan was allowed to take four touches on the ball in the opposition box before turning and thundering in a shot - Ryan’s effort was saved by Guiry in the 51st minute.

The visitors came awful close to scoring a goal of their own in the 53rd minute when Dylan Walsh’s corner picked out the head of Paul Shanahan and the Saints’ Derek Breen was required to make a save.

St Michael’s settled back down to their work and in the 58th minute Ollie O’Driscoll and Jimmy Carr failed to get a telling touch on Willie Armshaw’s tempting cross. There was no need to be too concerned, however, as two minutes later Armshaw was fouled, Shane Ryan swung in another left-footed in-swinger from the right and Johnny Kennedy headed home (2-0).

Seconds later the Saints fell asleep and were very nearly punished when Keith Cashman played in Richie Crowe, but the winger lifted his shot over the bar.

Jimmy Carr and Seán Paddy Guerins came close to adding to the St Michael’s tally soon after before Keith Guiry conjured an absolute moment of magic in the 76th minute - Guiry swivelled in the middle of the field and in the blink of an eye picked out the enterprising run of Keith Cashman; with the offside trap sprung Cashman raced through, rounded the ‘keeper and slotted home (2-1).

With nine minutes to play Shane Ryan dispossessed a defender inside the Clonmel Town box, but ‘keeper Dylan Guiry conjured an amazing reaction save to deny the Saints’ midfielder. Two minutes later Guiry save once more, this time from John Connery while Adrian Cleere did very well to make a nuisance of himself in the 85th minute when Connery looked certain to score.

Clonmel Town created the final goal-scoring opportunity of the evening when Dylan Guiry’s kick-out found Keith Guiry in the middle of the field - Keith Guiry picked out Jamie Ahearne who, in turn, played Jack Burke through on goal and although Burke got his shot away Derek Breen made a comfortable save.

St Michael's progressed to the Tipperary Cup final following a 6-0 last four away win over the Peake Villa B team. In the first round St Michael's saw off the challenge of Cashel Town B (5-0) before accounting for Peake Villa (4-1), but in the quarter-finals Bansha Celtic managed to trouble St Michael’s. The contest finished nil-all before the Saints won a sudden death penalty shoot-out 4-3.

St Michael's beat the mighty Pike Rovers in the recent Munster Junior Cup final - the Saints took the lead thanks to Jimmy Carr, but Rovers hit back to force extra-time (1-1) before the game was decided on penalties (4-3).

St Michael's are, of course, also expecting to pit their wits against competition kingpins Sheriff YC in the FAI Junior Cup final - the contest was recently postponed due to the fact that Aisling Annacotty (Sheriff YC's semi-final opponents) have lodged an objection.