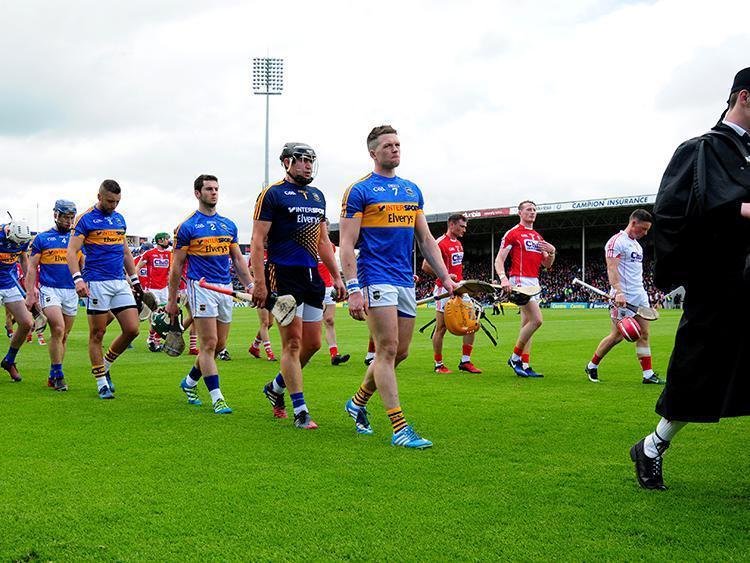 Pádraic Maher pictured leading the Tipperary team during the 2018 pre-match parade prior to facing Cork.

This time last year (on May 27 to be exact) former Clare manager Ger Loughnane spoke out during the half-time interval as Tipperary trailed Cork by a significant margin at Semple Stadium, Thurles. Loughnane insisted that there was “no way back for this Tipperary team now - either today or in the championship”. So, in light of Sunday's performance against the Banner we thought it might be nice to watch Ger Loughnane's 2018 comments once more.

Although the Premier County would fight back to earn a draw in that 2018 contest with Cork (2-20 to 1-23) Ger Loughnane declared at half-time that Tipperary “have come to the end of the line”. The Clare man also asserted that four of the six Tipperary backs were “thirty or more”. At the time none of the starting Tipperary backs were over thirty years of age: Seán O’Brien (28), Séamus Kennedy (24), Michael Cahill (29), Joe O’Dwyer (26), Ronan Maher (23) and Pádraic Maher (29).

Ger Loughnane: "Tipperary have come to the end of the line.. there's no way back for them now - either today or in the championship" pic.twitter.com/ATp2gJxbAc

“It isn't game over completely, but you have one team with pace, skill, movement, very, very smart play, brilliant in the air and doing exactly what John Meyler said at the start - that they were going to try and burn it up and that's what they are doing. Then you have another team, Tipperary, who, unfortunately, have come to the end of the line. And, it's not a lack of character there today; it's just a lack of energy. And, that's what happens to a team when they get old; they lose that energy. The energy can only be brought back again if you have an infusion of youth - you have no youth in that Tipperary team. The problem is that four of their backs are thirty or more, the centre of their back line is as slow as could be; Cork have drawn them out; they have allowed the Cork half-forwards to draw them out and then Cork played brilliant ball into their full-forward line. So, there is no way back for this Tipperary team now - either today or in the championship, unfortunately” - Ger Loughnane (Sunday Game Live, May 27 2018)