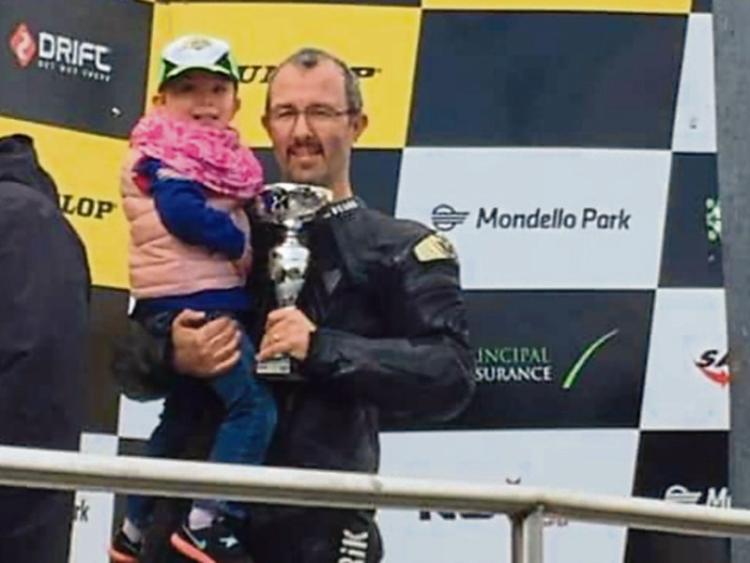 Trevor Landers with his daughter Grace, after finishing second in a race at Mondello Park in March

In most sports youth is the key to success, but no one told Bansha man Trevor Landers.

The 40 year-old salesman only took up his favourite sport of motor cycle racing at the youthful age of 35!

For Trevor, his love of two wheels goes back to the early memories of seeing his grandfather on a bright red Vespa scooter, and his father on a Honda 50.

Now living in Cahir,  married to Grace and father to 4 year-old Grace, Trevor is a member of the West Cork Motor cycle club.

The tree nursery salesman got hooked on racing motor cycles after completing  a few track days at Mondello Park. This was soon followed by a few hill climbs and drag races, which were organised by his local club.

In 2014 he decided to try his skills on the race track.

Armed with an  ageing 600 Honda, Landers competed in the competitive supersport 600 class.

Trevor gradually honed his skills, and for 2017 acquired a 2005 CBRR Honda.

With this machine, Trevor won his class at the West Cork Drag Races, (a quarter mile sprint)  and was also a winner of the Joey Dunlop perpetual trophy for the fastest club member at the same event.

But it was at the circuits, and Mondello Park for the prestigious Mondello Masters series, where Landers showed his prowess.

On paper, a 14 year-old bike should not be competing with modern day machinery, but no one told Trevor that.

Despite the older machine, Trevor’s skill and race craft shone through, and his results in the Mondello Masters Cup class were nothing short of  amazing.

Landers battled against the odds and took no less than seven podium finishes, underlining his ability. These consistent results saw the Cahir rider take fourth place overall in the final championship standings.

For the 2019 Mondello Masters series, Trevor decided to move up a few years  to a 2014 ZX6R Kawasaki.

This bike is five years old, unsponsored and still lacking in horsepower compared with the more modern bikes. But  with a bit of luck Landers is hoping  to be more competitive in the Mondello Masters Cup Championship.

Two rounds into the championship, Landers has already taken his first-ever win, along with three more podium finishes, and currently lies in joint third place with former pre- injection champion Darryl Sharkey, and is only five points adrift of  championship leader Michael Owens.

Another former champion, Ian Prendergast,  also a former pre-injection champion, lies second in what can only be described as a very closely-contested championship.

Reflecting on the opening races,  Trevor  says “I was so pleased to win my first-ever cup race.

“It has been very competitive this year,   and I’m really enjoying the close racing, but I am happy and content with my own progress.

“The slower Honda certainly helped me for race craft and I think this is equally important as a fast bike.

“Let’s hope we have a safe season, and we will take each race as they come.

Trevor’s next outing will be at Mondello Park on June 22-23.