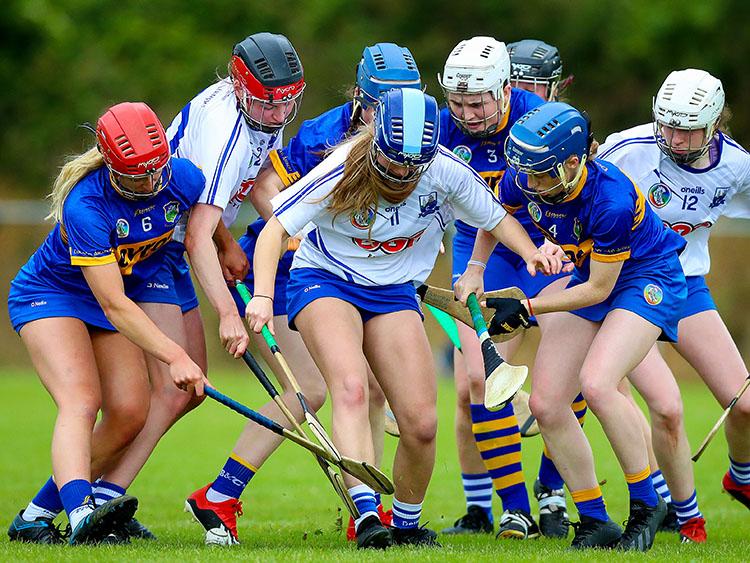 The Tipperary and Waterford players pictured battling for the ball at The Ragg Camogie Grounds on Saturday evening. Picture: Inpho

Cork referee Andrew Larkin opted to abandon the Liberty Insurance All-Ireland Senior Camogie Championship match between Tipperary and Waterford at The Ragg Camogie Grounds on Saturday evening following an injury to Borris-Ileigh star Nicole Walsh - fifty-seven minutes were played in the contest when Nicole Walsh fell heavily after the Premier County player challenged for a dropping ball. No ambulance was present at the ground and since a significant period of time elapsed before the injured player was removed from the field the referee elected to abandon the game. We forward our best wishes to Nicole Walsh who is an athletic, stylish and whole-hearted player who was released from hospital on Sunday with what was described as a "serious concussion". It was announced following the game that the contest between Tipperary and Waterford would be re-fixed for a later date.

In a recent Munster Senior Camogie Championship semi-final Tipperary performed superbly when beating Waterford by eighteen points (2-23 to 1-8) at The Ragg, but on this occasion the Déise represented a side utterly transformed.

And, Waterford appeared to be well on their way to famous victory over the Premier County prior to the unfortunate injury suffered by Nicole Walsh.

Meanwhile Bill Mullaney’s Tipperary team looked a little off-colour and only for Orla O’Dwyer (who scored five points from play) the Premier County struggled to gain a foothold in this contest.

Tipperary started reasonably well and led 0-3 to 0-1 after nine minutes thanks to two Cáit Devane frees and an Ereena Fryday strike from play.

Waterford, however, were highly-motivated for this contest and responded well to the challenge posed. A wonderful point from Beth Carton reeled Tipp in before an Orla Hickey effort tied the game. Carton cracked over another superb score in the 12th minute to present her side with the lead and it is worth noting that Tipperary were playing with the aid of a slight breeze during the opening half.

Orla O’Dwyer was one of the few Tipperary players winning her individual battle and the Cashel star swung over left-handed points in the 17th, 19th and 27th minutes to cancel out further efforts from Carton (two, one free) and the sides were level (0-6 apiece).

Beth Carton converted two placed balls (one ’50) to force Waterford into a 0-8 to 0-7 interval lead and although Orla O’Dwyer hit back for Tipperary in first half injury time it is worth noting that the Déise created two terrific goal-scoring opportunities in the 27th and 30th minutes - Aoife McGrath blocked the first with her leg from Annie Fitzgerald and then Tipp ‘keeper Caoimhe Bourke raced off her line to smother another effort from Fitzgerald three minutes later.

Tipperary performed well in the third quarter and managed to carve themselves out a 0-12 to 0-11 lead with forty-seven minutes played.

Cáit Devane (free), Nicole Walsh and Orla O’Dwyer fired over points for Tipp during the hectic opening five minutes of the second half, but Sarah Lacey and Beth Carton responded for Waterford to tie the game (0-10 each).

Grace O’Brien grabbed a ball and set up Cáit Devane for the lead score in the 38th minute and then, nine minutes later, Nicole Walsh set up O’Brien for a fine score to help the home side into a 0-12 to 0-11 lead.

Waterford, however, were outstanding thereafter. A point from Orla Hickey tied the game and then, in the 48th minute, Beth Carton gathered possession in the middle of the field, took on the Tipperary defence and landed an outstanding effort off her left.

Carton converted a free soon after before Waterford plundered the only goal of the game in the 50th minute when Orla Hickey scrambled home a three-pointer following a ferocious battle for possession in the Tipperary goalmouth. Carton landed yet another free in the 52nd minute and the Déise led by six (1-15 to 0-12).

Tipperary rallied with two late frees from Cáit Devane and although the introduction of Mary Ryan to the team appeared to have a big impact on the Premier County team it looked as if Waterford were on their way to win this contest.

The Tipperary senior panel of players pictured before taking on Waterford on Saturday evening.

Next up for Tipperary in the Liberty Insurance All-Ireland Senior Camogie Championship are two tricky away ties in Cork and Clare on June 22 and July 6 respectively before hosting Dublin (July 13) and then, finally, making the trip to face Meath (July 20) during the round robin phase of the championship. The All-Ireland quarter-finals are scheduled to take place on the weekend of August 3, the semi-finals on August 17 and the final on September 8.