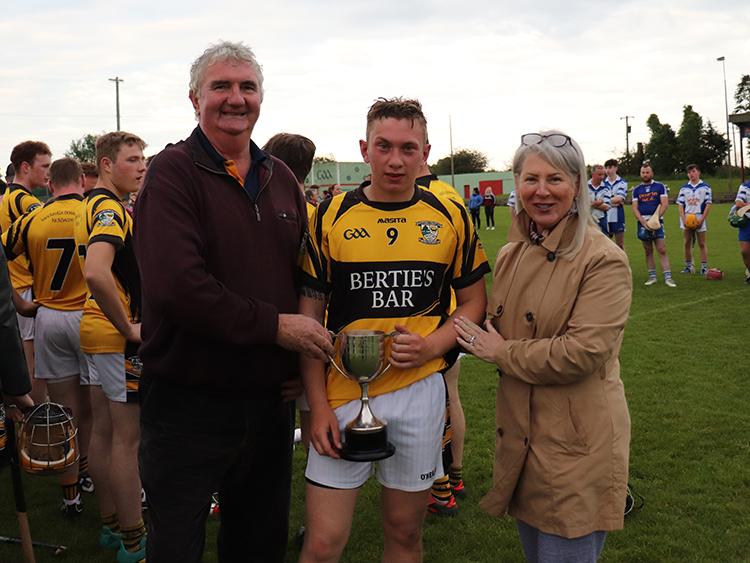 Knockavilla-Donaskeigh Kickhams claimed a first-ever Maria Marron Palmers Hill Stud West Tipperary Junior B Hurling League title when they saw off Cappawhite at Leahy Park in Cashel on Tuesday evening last. Kickhams, who were competing in a first final in the competition, led from start to finish and inflicted a second final defeat in-a-row on a Cappawhite team who struggled to get into the game. And, when the sides met just a week earlier it was Cappawhite who had five points to spare.

The first attack of the game was from Cappawhite, but despite being put under pressure Kickhams goalkeeper Paddy Ryan cleared his lines. Michael McCormack pointed from play to get Kickhams off the mark and they dominated for large spells of the contest after this.

Niall O’Brien was in good form at wing-forward and he added two more points from play. Conor O’Mahony could have had a goal for Kickhams after he turned the full-back but Cappawhite had numbers on the line to clear.

Cappawhite were struggling to break past the Kickhams half-back line which was now well on top. And, Cappawhite weren’t helped by the loss of two of their full-back line - Dessie Ryan and Ger Ryan - to injury early on. This forced them into a reshuffle at the back with Thomas Costello going to full-back and John McGrath dropping back from midfield.

Dean O’Dwyer got Cappawhite off the mark in the 11th minute. Kickhams though increased their advantage with another from Michael McCormack while Daniel Lonergan also got his name on the score sheet.

Dara McCarthy found himself in space and cut the deficit to three with Cappawhite’s second point.

The opening seven points of the game all came from play.

Kickhams were really in the groove and Daniel Lonergan continued his good form from placed balls with two more points while Paudie Slattery and Conor O’Mahony were also on target. David Murphy added two for Cappawhite, but Niall O’Brien (two) and Conor O’Mahony kept the Kickhams advantage intact.

Cappawhite finished the half better as Gearóid Lennon added points while Michael O’Neill (a first half substitute) pointed from a placed ball. Kickhams though kept the scoreboard ticking over and Paudie Slattery and Dan Breen both pointed to see Kickhams ahead by double scores at the break 0-14 to 0-7.

The opening seven minutes of the second half saw a flurry of scores. Daniel Lonergan (free), Paudie Slattery and Ben Ryan added to Kickhams’ tally while Michael O’Neill got his first from play for Cappawhite.

Cappawhite needed a lifeline and looked to have found it when Dara McCarthy got a run on the defence coming in from the stand side and unleashed his shot to the far corner of the net.

For the next thirteen minutes there would be no score though even though Cappawhite enjoyed plenty of chances to cut the deficit. Dara McCarthy broke the deadlock with ten to go, but Daniel Lonergan ended Kickhams’ drought with another pointed free.

Michael O’Neill added his third point from a free, but Kickhams were now firmly back in the game and Paudie Slattery added two more points. Joe Griffey and Conor O’Mahony rounded off the scoring.

It was an all-round team performance from Kickhams who built their win on a strong half-back and half-forward line. Their half-back line of Damien McGrath, Pa O’Brien and Michael Shanahan nullified the Cappawhite attack. Their half-forward line finished with ten points with Niall O’Brien a constant threat at wing-forward. Eoin Carew was solid at full-back while Paudie Slattery and Conor O’Mahony added eight points between them.

Cappawhite struggled to get a foothold in the game. Thomas Costello showed his experience at full-back while Denis Kelly and Cathal McCarthy tried hard in the half-back line. Dara McCarthy was lively as was Gearóid Lennon. Michael O’Neill made his presence felt and tried hard when he was spring from the bench.