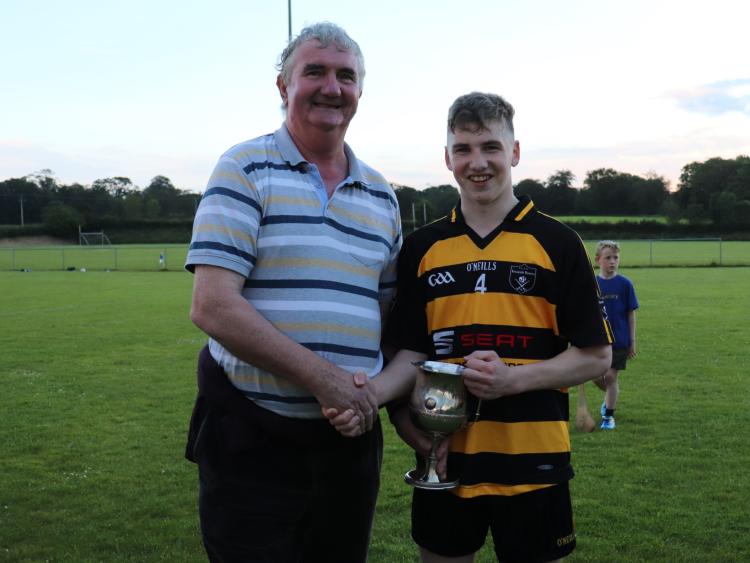 Kickhams, who were playing in just their third final at the grade, were aiming to preserve their unbeaten record in the final, but it was Arravale Rovers who would reverse the result between the sides during the round robin stages of the competition and emerge victorious.

Five points during the closing six minutes of the opening half gave Arravale Rovers a six-point cushion at the break and it was a lead that Kickhams just could not surmount though they did have plenty of chances.

Killian Fitzgerald opened the scoring for Arravale Rovers from a placed ball in the third minute.

The opening exchanges saw Kickhams have more chances though they struggled to find the target - Aaron Browne eventually got them off the mark in the seventh minute with a point from play.

Dan O’Dwyer lit up the game up at the end of the first quarter when he scored the game's opening goal. Joe Fitzgerald and Aaron Browne cut the deficit to the minimum for Kickhams as they now looked to be getting into a groove.

Both sides had tried to stamp their authority on the game, but neither had done so up to the closing stages of the half. It was Arravale though who finished the half stronger with five unanswered points. Substitute Evan Hawkins got his name on the score sheet and Niall Sharpe added two in a minute. Dan O’Dwyer added to his goal while Eoghan Lonergan finished the first half scoring.

Despite not playing to their best Kickhams had been well in the game, but it was Arravale who had a strong lead at the break 1-6 to 0-3.

Kickhams came out fighting in the second half and within five minutes the deficit was down to three. Devon Ryan got their first score from a placed ball while Jamie Duncan and Stephen Browne both pointed from play.

Kickhams now had Arravale under pressure and were turning over plenty of ball as they tried to get themselves back into the game. Arravale Rovers needed to release the pressure valve and when Caleb Hickey pointed in the eight minute of the half it did just that to loud cheers from the Arravale supporters.

Kickhams then struggled in front of the posts, but Arravale Rovers were having no such problems. Niall Sharpe and two more from Caleb Hickey had them comfortably seven up with eleven minutes of regulation time to play.

When Eddie Daly was fouled in the square Kickhams were given a lifeline and Devon Ryan made no mistake from the penalty spot. Arravale’s responded immediately through a Gavin O’Meara point.

Devon Ryan hit back with a pointed free before Caleb Hickey did likewise at the opposite end.

Kickhams had goal chances as the half wore on, but just could not find the target.

Then Arravale Rovers overturned possession in the middle of the field and a sweeping move saw Gavin O’Meara find his way through the opposition defence and fire an unstoppable shot past Declan Ryan in the Kickhams goal.

Kickhams got themselves another lifeline in injury time when Eddie Daly kicked to the net after Aaron Browne’s shot had been saved. The latter hit another free to put four between the sides. Kickhams now went in search of goal, but the Arravale defence stood solid and when Dan O’Dwyer pointed five minutes into injury time it sealed title number twenty-seven for the club.

For Arravale Rovers this was an all-round team performance. Their half-forward line of Caleb Hickey, Killian Fitzgerald and Niall Sharpe hit 0-8 between them while on the inside forward line Dan O’Dwyer finished with 1-2 from play. Their bench made a huge impact with Gavin O’Meara and Evan Hawkins adding 1-2 between them. Meanwhile their defence as a whole nullified the Kickhams attack. In defence Jonathan Ryan work tirelessly from start to finish while Shane Maher was a real presence.

Knockavilla-Donaskeigh Kickhams just never fully got into this game, but to their credit they fought right to the end. Jamie Duncan covered plenty of ground and continually took the fight to Arravale Rovers. Ben Loughman was very strong in defence while Aaron Browne always carried a threat going forward.