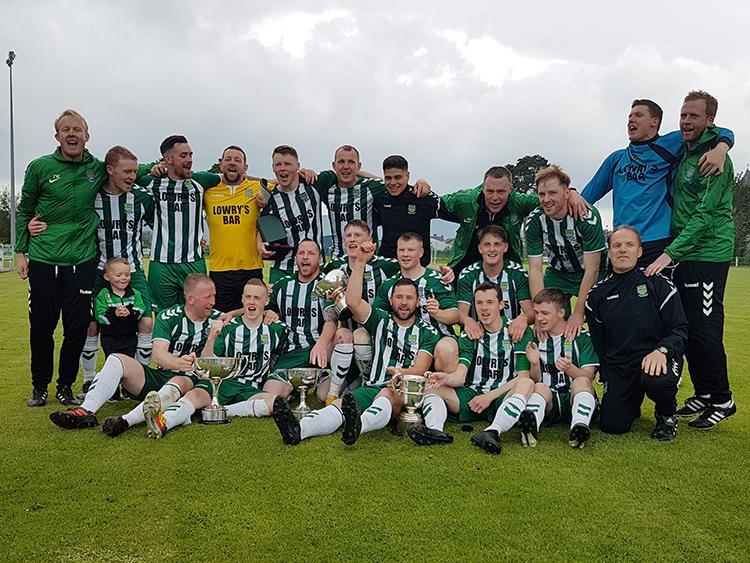 The St Michael’s squad pictured celebrating their Tipperary Cup final success along with the four trophies that the Saints won during the 2018-19 season.

Following weeks of speculation it is understood that the New Balance FAI Junior Cup final between St Michael's and Sheriff YC (Dublin) will take place on Saturday, August 31 (kick-off 2pm) at a venue which is yet to be determined.

St Michael's were expecting to pit their wits against competition kingpins Sheriff YC in the decider last May, but the contest was postponed due to the fact that Aisling Annacotty lodged an objection.

St Michael’s qualified for the final of the FAI Junior Cup thanks to a 2-0 semi-final win over Glengad United at Cooke Park in Tipperary town. The last eight in the competition pitted St Michael's against the might of Evergreen in Kilkenny and the Saints prevailed on a 1-0 scoreline. In the last sixteen St Michael's beat Mervue United 2-1 while this outstanding Saints team saw off the challenge of last season’s semi-finalists Newmarket Celtic (Clare & District League) in the last thirty-two (2-0). Previous to that encounter St Michael's beat Leitrim's Manorhamilton Rangers (2-1), Tipperary Town (7-0), Old Bridge (10-0) and Mullinahone FC (6-0).

Competing in the FAI Junior Cup final, of course, affords St Michael's an extraordinary opportunity to gleam a fifth trophy from the 2018-19 campaign.

On June 1 the Saints added another chapter to their extraordinary season at Cooke Park in Tipperary Town when the side managed by James Walsh collected their fourth trophy of the season - this time the Saints won the Tipperary Cup final. St Michael’s beat Clonmel Town in the decider (2-1) and celebrated on the pitch afterward with all four trophies won by the Tipperary South & District League club (the Tipperary Cup, TSDL Premier Division trophy, Munster Champions Trophy and the Munster Junior Cup).

St Michael's progressed to the Tipperary Cup final following a 6-0 last four win over the Peake Villa B team. In the first round St Michael's saw off the challenge of Cashel Town B (5-0) before accounting for Peake Villa (4-1), but in the quarter-finals Bansha Celtic managed to trouble St Michael’s. The contest finished nil-all before the Saints won a sudden death penalty shoot-out 4-3.

St Michael's beat the mighty Pike Rovers in the Munster Junior Cup final - the Saints took the lead thanks to Jimmy Carr, but Rovers hit back to force extra-time (1-1) before the game was decided on penalties (4-3).