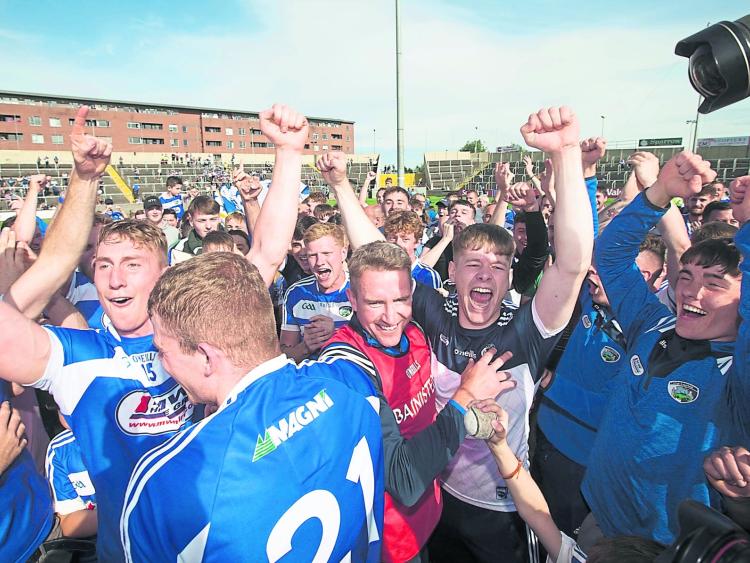 The Premier County will take on Laois in a novel All-Ireland Senior Hurling Championship quarter-final on Sunday, July 14 (4pm) at Croke Park, Dublin and although many Tipperary supporters are likely to dismiss the challenge posed by Eddie Brennan's men here are five reasons why Liam Sheedy should be concerned.

LAOIS ARE ON A HIGH

The Laois men then launched their Joe McDonagh Cup campaign with victories over Offaly (4-22 to 3-21), Antrim (2-24 to 1-19) and Kerry (5-17 to 1-21). And, while they drew with Westmeath (1-22 each) during the group stage of the competition Eddie Brennan's men made no mistake in the decider when dismissing the Westmeath challenge (3-26 to 1-21). Laois carried their undefeated record into the All-Ireland preliminary quarter-finals and beat Dublin (1-22 to 0-23) thanks to a slick, ambitious and determined performance.

Laois are on a high and must be respected.

Kilkenny legend Eddie Brennan is the manager of the Laois team and although his side are facing their third contest in fifteen days on Sunday you can be sure that the Graigue-Ballycallan man will have his side primed to take on Tipperary.

This time last season Laois just about avoided relegation to the Christy Ring Cup (third tier), but Brennan has transformed the culture surrounding the Laois team.

Brennan coached Killenaule during the Robins' 2018 campaign and dropped John O'Dwyer for a key championship clash. The former Kilkenny star expects a standard of behaviour from his players. And, as a result you can expect Laois to enter next Sunday's contest with their sleeves rolled up and eager to make a declaration about themselves on the national stage.

Please note that in Laois' victory over Dublin one of the most talented forwards in Leinster, that's Stephen Maher, didn't feature. And, without him the Laois display still featured seven different scorers from play.

Aaron Dunphy, Mark Kavanagh, Cha Dwyer and Ross King are serious forwards and although Willie Dunphy did most of his work against Dublin at midfield he could well turn up on the inside line and wreak havoc.

In the Joe McDonagh Cup final, for example, Laois played a much more orthodox system with Ross King and Aaron Dunphy cracking home terrific goals. Indeed, the pace of the Laois forward line on that occasion was more than noteworthy.

Laois are coached this season by Niall Corcoran (Kilmacud Crokes - a former Galway and Dublin inter-county player) and trained by Limerick man Dave Moriarty who was a member of Liam Kearns' Tipperary senior football set-up in 2018.

As a result the Laois men are conditioned to stay the course and retain their composure when it matters most. Although Dublin trailed Laois by a significant six points at Portlaoise on Sunday Mattie Kenny's side drew level with fifteen minutes to play. Laois, however, drove on, hit the next three points and won the remainder of the contest 0-10 to 0-8.

Eddie Brennan is likely to adopt a practical approach - Laois are prepared to change their approach based on the challenge posed.

Laois, for example, employed a sweeper (John Lennon) against Dublin while defenders Lee Cleere, Matthew Whelan, Joe Phelan, Jack Kelly, Ryan Mullaney and Pádraig Delaney went man-for-man. And, whatever about that defensive ploy Laois were smart enough to work the ball out and not lamp the ball down the field toward an out-numbered forward division.

Top class midfielder Paddy Purcell represents a key link man for Laois in the middle third (Purcell would walk onto any inter-county team in the country) while Eddie Brennan's men also feature key ball winners at wing-forward in Aaron Dunphy and Éanna Lyons.

Watch out too for 'keeper Enda Rowland - he landed two long-range frees and conjured a couple of notable saves, but his ability to ping the ball out to Laois defenders against Dublin had a significant impact on the contest.

Rowland stuck it to the chin of his receivers more often then not and even when a couple went awry the Laois 'keeper refused to get rattled. Rowland's expertise helped Laois to avoid dropping hanging ball on the Dublin half-back line; a key aspect to their famous win.

Tipperary simply have to respect this Laois team which features plenty of jagged edges.