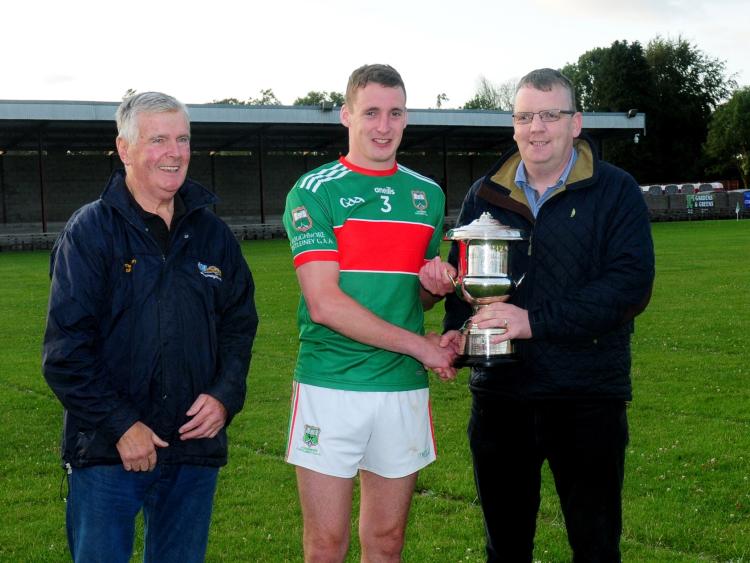 Holders Loughmore-Castleiney retained their CM Signs Cahill Cup senior hurling title at Holycross on Wednesday evening (July 17) when they overcame the considerable challenge of Moycarkey-Borris in a lively and free-scoring contest which was a repeat of last year’s decider.

The winners were without their inter-county men (seniors Noel, John and Brian McGrath and under-20 player Ciarán Connolly) and featured veteran David Kennedy in an unusual role as goalkeeper, but despite the absence of such key players Loughmore made the running for most of this contest.

Moyarkey-Borris, however, were never far behind them and led briefly twice in the first half, but for the most part it was Loughmore-Castleiney who set the pace and looking the likeliest of winners with Moycarkey playing catch-up.

It was very entertaining stuff as Loughmore pushed 0-5 to 0-2 clear after ten minutes, but Jack Morrissey’s goal for Moycarkey in the 13th levelled matters and goalie Rhys Shelly pointed his second free in the 17th minute to give Moycarkey the lead.

Four minutes later Loughmore were back in front when Evan Sweeney broke through for a cracking goal and they stayed in front to the break at which stage they led 1-10 to 1-8.

Moycarkey, however, were playing with the breeze on resuming and had every reason for optimism.

In a lively start to the second half the sides swapped points with three scores each during the opening six minutes.

Three unanswered Loughmore points (between the 38th and 43rd minute) forced them four clear (1-16 to 1-12) and they looked on course for victory, but Moycarkey-Borris were right back in the game when Kieran Morris went through three tackles before blasting home a goal in the 48th minute (1-17 to 2-12).

Loughmore, however, soon regained control. Liam McGrath pointed and then Joseph Nyland netted for them in the 52nd minute as he finished off a slick three-man move to put them 2-18 to 2-13 ahead. They had extended that advantage to six points with time running out when Jack Morrissey’s sideline ball was deflected to the Loughmore net by Conor Hayes to leave only three points in it.

Loughmore-Castleiney were the better side as the twenty-three scores to seventeen suggests and it was an important win for them as they build up for championship action next month, but Moycarkey-Borris can take enough from this game to boost their confidence.

Loughmore lost Joseph Hennessy to injury and will be hoping he will be fit again for the serious business of the year. John Meagher anchored their defence in his customary unflappable style with Aidan McGrath contributing with four long-range points from frees and two from play. Evan Sweeney and Liam McGrath were the big threat in attack with newcomer Conor McGrath also having a fine outing.

Moycarkey-Borris were disappointed at losing the final for the second year in succession, but will benefit from the game. Eoin Hayes, Rory Ryan and James Power did well in defence with John Bergin and Kieran Morris the main scoring threat while Rhys Shelley showed he could take scores as well as prevent them.