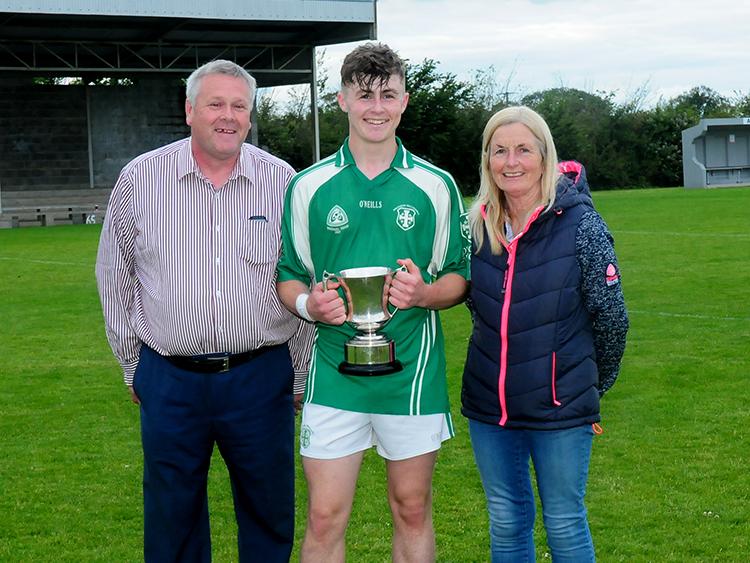 Holycross-Ballycahill were crowned Jim & Anne Kennedy Mid Tipperary junior A football champions following a narrow final win over Gortnahoe-Glengoole at Littleton on Saturday evening. Although there was just two points between the sides in the end Holycross-Ballycahill appeared the more accomplished side in this contest and may well have won by a more significant margin had they not fired fourteen wides.

That said Holycross-Ballycahill ‘keeper Liam Moloney represented a key influence on this decider. In the opening minute Gortnahoe-Glengoole whispered open sesame to the Holycross defence, but Moloney denied the raiding Shay Butler with a sensational save; twenty-two minutes later Moloney conjured another great stop to deny Paddy Skehan while with five minutes to play the Holycross goalkeeper saved once more, this time from Paul Hanrahan.

Liam Moloney was certainly in the running for the man of the match award from a Holycross-Ballycahill point of view as was the relentless Éanna Ryan at centre-forward, Brian Barrett at corner-back, Philip Fogarty in the middle of the field and key marksman Paddy McGrath who booted over three points from play. Meanwhile Gortnahoe-Glengoole found heroes in Gearóid Fahy, Paul Hanrahan and Adrian Maher who gave this contest his all.

Following a patient attack in the third minute Paddy McGrath got Holycross off the mark, but when Paul Hanrahan was hauled down for a penalty in the fifth Keane Hayes made no mistake from the spot. Hayes landed a mighty effort from play soon after and Gortnahoe led 1-1 to 0-1 with seven minutes played.

Philip Fogarty and Paddy McGrath responded for Holycross before Éanna Ryan set up Luke O’Mara for a classy finish in the 17th minute. Gortnahoe-Glengoole were not to be out-done, however, and they hit back with a goal of their own seconds later when Brian Maher provided the assist and Paddy Skehan cracked a superb shot into the top corner.

Gortnahoe now led 2-1 to 1-3, but Holycross-Ballycahill dominated the remaining minutes of the opening half when out-scoring their opponents 1-3 to 0-1. Kieran Hennessy (two, one free) and Jack Ryan notched the points for Holycross while Hennessy’s deflected shot deceived Jimmy Corcoran in the Gortnahoe goal in the 30th minute to present Holycross with a significant interval advantaged (2-6 to 2-2).

Ten minutes of the second half elapsed before Kieran Hennessy (free) extended the Holycross lead, but Gortnahoe-Glengoole responded through Shay Butler and then Timmy Dunne to reduce the margin to three entering the final ten minutes (2-7 to 2-4).

With five minutes to play Liam Moloney managed to save Paul Hanrahan’s punched effort and that was as close as Gortnahoe came to rescuing the situation while an excellent Paddy McGrath point in the 59th left four between them. Timmy Dunne brought the scoring to a conclusion with two converted frees in second half injury time.