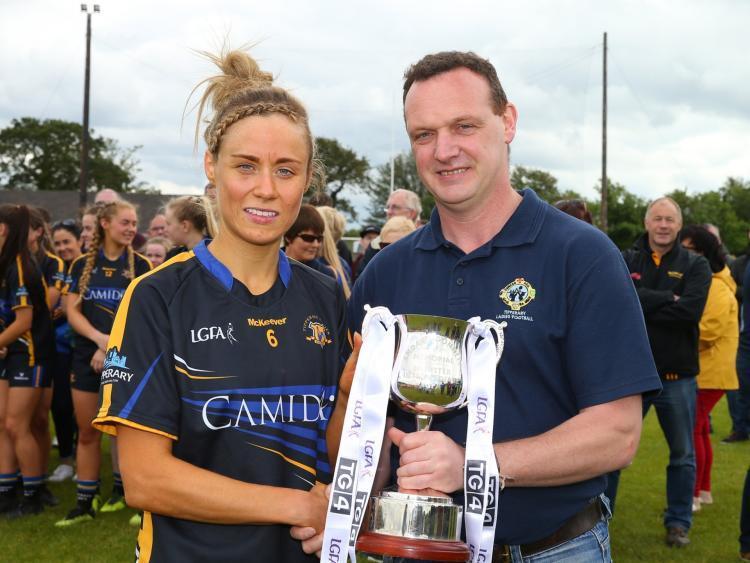 Tipperary roared to a 33-point win over Longford at Seán Treacy Park in Tipperary town on Sunday afternoon in the TG4 All-Ireland Intermediate Ladies Football Championship - during a sensational display the Premier County fired home seven goals in all with Aishling Moloney contributing 2-11 to the home side’s tally.

Believe it or not matters were looking a little ropey for Tipperary during the opening half - Shane Ronayne’s enterprising team were playing with the aid of a strong breeze, but when Michelle Farrell struck for a second Longford goal in the 22nd minute there was just two between the sides (0-8 to 2-0).

Visiting goalkeeper Emer Esler was absolutely superb early on when finding her runners with a whole series of terrific re-starts and although the Leinster side still trailed the Munster champions this was very encouraging from a Longford point of view.

Just then, however, Tipperary exploded into devastating life and fired four goals and four points without reply to lead 4-12 to 2-0 at the break. Tipperary’s attitude, skill, athletic ability and commitment to the team ethnic were absolutely superb during this period.

Points from Aishling Moloney (0-4, 0-3 frees), Bríd Condon, Laura Dillon, Ava Fennessy and Aisling McCarthy had forced Tipperary into an early lead, but two goals, which arrived courtesy of Michelle Farrell, had Longford in with a fighting chance.

Anna Rose Kennedy launched an avalanche of Tipperary scores in the 23rd minute when intercepting a Longford kick-out and then burying a rousing three-pointer. Aishling Moloney (two) and Angela McGuigan soon added points from play while Moloney set up McGuigan for a goal chance in the 26th minute; the full-forward sold a terrific dummy before rolling a classy effort into the bottom right hand corner.

Aisling McCarthy added to the Tipp tally with a point from play while the opening half came to an emphatic conclusion when Aishling Moloney and then McCarthy fired home two more Tipperary goals (4-12 to 2-0).

Longford looked a little disheartened thereafter and only added two points to their tally during the opening twenty minutes of the second half despite playing with the aid of a stiff breeze.

Aishling Moloney set up Emma Morrissey for Tipperary’s fifth goal in the 51st minute and Ava Fennessy punched home the sixth in the 57th while Aishling Moloney converted a penalty on the hour mark. Moloney also landed four late points for the Premier County with the dummy solo which preceded an effort in the 57th minute something to really savour.

In total fourteen teams are battling it out for the right to land the Mary Quinn Memorial Cup in the All-Ireland final on Sunday, September 15 at Croke Park, Dublin.

The championship comprises of two groups of four and two groups of three with the top two teams in each group progressing to the quarter-finals.

In the opening round Tipperary beat Meath 6-10 to 1-14 at Ardfinnan while in their final group game Tipperary will face Wicklow on the weekend of July 28.

The quarter-finals are scheduled to take place on August 4 and the semi-finals on August 18.

Tipperary, of course, were crowned All-Ireland intermediate champions as recently as 2017 when beating Tyrone so famously in the decider (1-13 to 1-10), but were cruelly relegated from the senior grade in the 2018. Tipperary recently won the Munster final when they beat Clare 0-20 to 1-4 in the decider. Tipperary progressed to that provincial final thanks to victories over Limerick (10-22 to 0-4) and Clare (2-15 to 2-11).