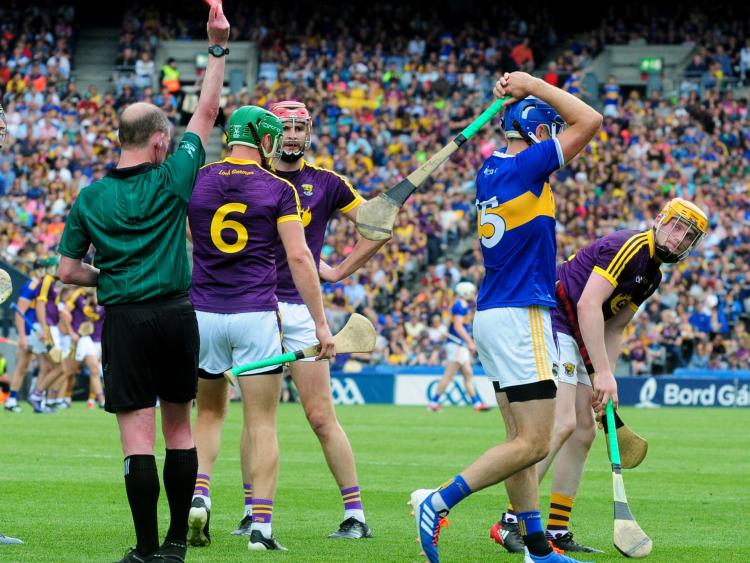 John McGrath shipped a second bookable offence and saw the Tipperary lads reduced to fourteen men against Wexford, but the Premier County fought on manfully and recorded a win. Picture: Eamonn McGee

The Tipperary senior hurling team found themselves well and truly up against it on Sunday at Croke Park, Dublin when John McGrath was sent off and the Premier County were asked to fight back from five points down with just fourteen. Liam Sheedy's men, however, refused to accept defeat and earned their place in the All-Ireland final thanks to what one commentator described as their “best comeback since the 1991 Munster final replay”.

“Tipperary might be bothered by the referee's decisions, but this morning, they won't care. This was their best comeback since the 1991 Munster final replay. What makes it truly remarkable is that this side were unlikely candidates to overcome the slings and arrows of outrageous fortune in such a manner. In recent times the Premier have been hurling's fancy Dans, superb when things were going their way but apt to wilt under pressure. Last year's championship campaign was like a bottling masterclass and this year's Munster final seemed like a reprise. So this performance was as surprising as seeing Hugh Grant play the title role in a remake of Rambo. It was a stirring tribute to the change wrought by Liam Sheedy”
Eamonn Sweeney (Irish Independent)

“There was a fear after Lee Chin’s goal that Tipp could collapse. Wexford had all the momentum. You wondered if Tipp would have the legs to even stick with Wexford, never mind sprint past them, but they fired up the engines and nailed five brilliant points in succession”
Anthony Daly (Irish Examiner)

“The current Tipperary crew have never been accused of being chokers, but their ability to mine victory from the deepest, darkest pits wouldn't be regarded as among their main qualities either. Until yesterday, that is, when they faced up to adversity with a courage and character that left Tipperary people everywhere with a warm glow”
Martin Breheny (Irish Independent)

“The Premier County lived up to its heritage yesterday in Croke Park with a performance for the ages. Down a man on 45 minutes and leaking 1-2 on the bounce, Tipperary wouldn’t yield. The men in blue and gold poured forward in waves to win a contest to rank with any of their great victories of the past”
Michael Moynihan (Irish Examiner)

“The most encouraging thing about their performance was that they played with that extra spirit when it was put up to them. But the thing is, spirit only gets you so far. It puts you in a position to win, but hurling ability gets you that win and, in the end, Tipperary just had too much of that for Wexford when they were able to get the ball out of their defence”
Brendan Cummins (Irish Independent)

“Despite losing John McGrath to a second yellow card, conceding two second-half goals and having put the ball in the net four times but only one counting, their character shone through to reach a first decider in three years”
John Fogarty (Irish Examiner)

“Five points down and a man down, Liam Sheedy’s side had every reason to fold their tents for the day. That they didn’t - and instead outscored Wexford by 0-12 to 1-2 the rest of the way - gives them every reason to imagine they have what it takes to face down Kilkenny in three weeks”
Malachy Clerkin (Irish Times)

“Twenty minutes to go, five points and a man down after John McGrath’s silly sending off and you could almost hear the sounds of the knives being sharpened for Tipperary and this generation of players. No one has ever questioned the ability of these individuals but their appetite for battle and ability to scrape through a battle rather than saunter through a game in balletic fashion has always been questioned. Add in the age profile of this team and it looked like the jury had their verdict after years of deliberations. Then came the final say as Wexford were outscored 0-12 to 1-2 across that last 26 or so minutes of play. And not just outscored but outfought and outmanoeuvred too. Even the bench, deemed light on impact all year, made a huge, maybe unexpected contribution. So much for the doubters”
Brendan O'Brien (Irish Examiner)

“Had Liam Sheedy been allowed script this match, he couldn’t have asked for more. His team, widely doubted since Limerick wolfed them down last month and the subsequent lack of response against Laois, showed great stoicism despite dealing with enough adversity to make Job protest”
Seán Moran (Irish Times)

“Resilience is a word that is often used in relation to Kilkenny under Brian Cody. After yesterday’s heroics, it is now a label that can also be easily attached to Tipperary under Liam Sheedy”
Donal O'Grady (Irish Examiner)