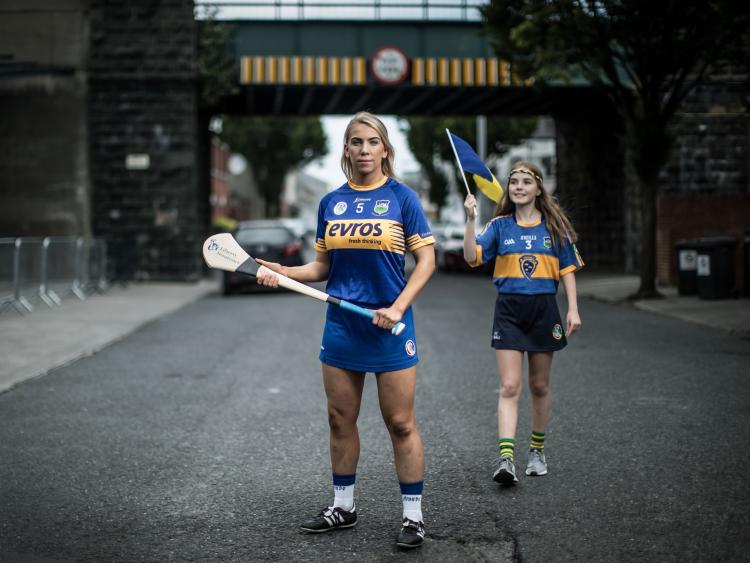 Tipperary battled their way into the semi-finals of the Liberty Insurance All-Ireland Senior Camogie Championship on Saturday evening at Semple Stadium, Thurles despite facing into the final fourteen minutes of this contest with just fourteen players.

It must be noted that the standard of play was poor; a fact mitigated by the rain and subsequently greasy conditions. Indeed, the flood lights were turned on for the second half despite the game having a 5.30pm throw-in.

And, while the hurling was not as slick as one would have hoped for the collective attitude of the Tipperary team was encouraging. Julieanne Bourke, Karen Kennedy, Niamh Treacy and Cáit Devane (especially from a whole series of awkward frees) enjoyed their outing in the blue and gold of Tipperary while the Premier County’s outstanding candidate for the player of the match award was the relentless Ereena Fryday at wing-forward. The Knockavilla Kickhams star ploughed through the world of work and was misfortunate to ship a second yellow card in the 53rd minute; the consequence of Fryday’s determination to work for her team and a harsh caution in the opening half.

Tipperary will be delighted to reach the semi-finals of the Liberty Insurance All-Ireland Senior Camogie Championship, but there is simply no doubting the fact that the Premier County will need to improve immeasurably before facing Kilkenny or Cork in the up-coming semi-finals. The All-Ireland semi-finals are scheduled to take place on the weekend of August 17 and the final on September 8.

It was interesting to note on Saturday evening that no Burgess-Duharra player started on the Tipperary team and only one (Gemma Grace) was named in the 24-player match day panel - in October 2018 Burgess-Duharra collected a seventh successive county title when beating Clonoulty-Rossmore by sixteen points in the final (2-20 to 0-8).

Despite playing with the wind in the opening half Tipperary were (very) fortunate to find themselves leading by a point at the break (1-4 to 1-3).

Following a foul on Dearbhla Egan the outstanding Niamh Mulcahy saw a penalty saved by Caoimhe Bourke as early as the fifth minute while the misfortunate Limerick ‘keeper Laura O’Neill spilled a Niamh Treacy effort at a point in the 18th minute into her own net.

A Cáit Devane free presented Tipperary with an initial lead before Niamh Mulcahy and then Caoimhe Costello landed points which wrestled the initiative away from the home side inside the opening nine minutes (0-1 to 0-2).

Orla O’Dwyer was fouled for a very awkward free which Cáit Devane converted in the 15th minute and then three minutes later Niamh Treacy’s goal forced Tipperary three clear. A cracking point from Ereena Fryday in the 19th minute left four between the sides (1-3 to 0-2), but there was absolute nothing fortunate about Niamh Mulcahy’s superb individual goal in the 21st minute - the Ahane star won possession just inside the Tipp 65-yard line and raced through before burying a blistering shot (1-3 to 1-2).

Points from Cáit Devane (another awkward free) and Laura Stack brought the first half scoring to a conclusion (1-4 to 1-3).

The game was level in the 32nd minute when Niamh Mulcahy (who else) slotted over a right-handed effort. Ten scoreless minutes then elapsed before Cáit Devane drilled over what looked like a vital free for a struggling Tipperary team.

The side managed by Niamh Lillis were not playing particularly well, but with Karen Kennedy, Niamh Treacy and, especially, Ereena Fryday digging in superbly in the middle third of the field the Limerick attacks were regularly disrupted at source.

There was further encouragement for the Premier County in the 44th minute when Orla O’Dwyer swung over a left-hander. Cáit Devane converted her fifth free in the 47th minute and, suddenly, Tipp led by three. Devane then landed a ’50 in the 49th minute and another free in the 51st to leave five in it (1-9 to 1-4).

Limerick were presented with a slight glimmer of hope in the 53rd minute when Tipperary’s Ereena Fryday was sent off for a second bookable offence, but the Premier County were battling well and managed to hold the Shannonsiders scoreless for twenty-eight minutes of the second half until Caoimhe Costello notched a fine point from play right on the hour mark.

Miriam Campion responded for Tipperary in the 63rd minute and to be fair the home side didn’t appear at all distressed during the closing minutes despite operating with one less player for the closing fourteen minutes of this contest (seven minutes of injury time).

There was one final highlight, however, when Tipperary goalkeeper Caoimhe Bourke conjured a sensational reaction save to deny Limerick’s Sarah Carey from close range.

In the end Tipperary led the wide count 6-5 and saw nine shots drop short or get blocked down (Limerick: four) while the Shannonsiders dominated the free count (15-11).