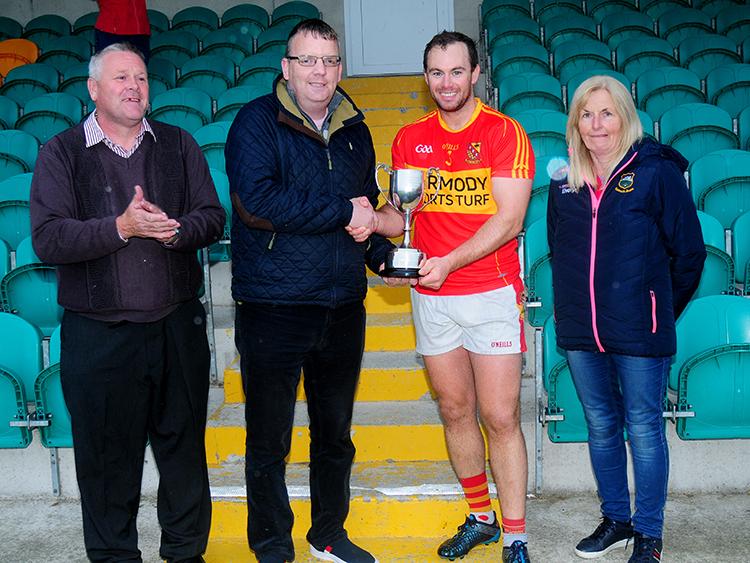 In the end the margin was flattering, but this a deserved win for Moycarkey-Borris over JK Bracken’s in the AIB Bank Mid Tipperary Intermediate Football Championship final at Templetuohy on Saturday evening when the Templemore lads wilted during the closing twenty minutes after being reduced to fourteen players.

Up to that point this was a well-contested final and JK Bracken’s were well-placed to triumph having trailed by only two points at half-time(1-4 to 1-2) having played against a fresh breeze.

It had all the appearances of a game that would go down to the wire, but the red-carding of JK Bracken’s centre half-back Eoin Fitzpatrick in the 40th minute (with Moycarkey still two points clear) changed the pattern of the game completely as Moycarkey-Borris used their numerical advantage to the utmost and ran out easy winners.

No one would have predicted a nine-point winning margin for either side as the first half progressed. With the aid of the breeze Moycarkey had the better of things, but some wayward shooting by them and stout defending by JK Bracken’s kept it tight.

Moycarkey had three points on the board - two from Rhys Shelley frees with the opening score by Anthony McKelvey - when JK Bracken’s were dealt a body blow as goalkeeper Kuba Beban was forced to retire with a leg injury.

Templemore moved midfielder Radek Natkaniec back into goal with Michael O’Meara coming on and they did very well during that period approaching half-time. Lorcan Roche had their first point in the tenth minute, but more misery for JK Bracken’s followed as McKelvey was on the end of a smart Moycarkey move to slam home a goal.

Four minutes later JK Bracken’s responded with a Jack Kennedy three-pointer (he finished off a four-man move) and with David Morris and Dylan Moloney swapping points before the interval Moycarkey-Borris were ahead (1-4 to 1-2) facing the turn-over.

JK Bracken’s were well-placed to drive on from there and having beaten the holders Loughmore-Castleiney en-route to the final did not lack self-belief. Moycarkey-Borris’ recent senior experience stood to them, however, as they successfully contained the JK Bracken’s challenge in the early stages of the second half when Dylan Moloney and Rhys Shelley swapping points.

Then came the red-carding of Eoin Fitzpatrick in the 40th minute which led to a Shelley pointed free for Moycarkey. Fitzpatrick’s departure unhinged JK Bracken’s as Moycarkey took control and had one-hand on the cup in the 47th minute when Anthony McKelvey bagged his second goal (2-6 to 1-3).

There was really no way back for JK Bracken’s now and although they battled bravely Moyarkey hit the last three points.

It was an encouraging win for Moycarkey-Borris which will bolster their challenge for county honours. Their stay in the intermediate grade could be short-lived with players of the calibre of Rory Ryan, David Morris, Niall Heffernan, Anthony McKelvey and Rhys Shelley in their ranks.

JK Bracken’s have time to regroup before they resume their county campaign. Things went pear-shaped for them in the second half, but if they can avoid losing some of the team to the senior ranks they could still figure in the shake up for county honours. James Bergin, Lorcan Roche, Aidan Fogarty, Jack Fogarty and Shane Doyle were their key men.