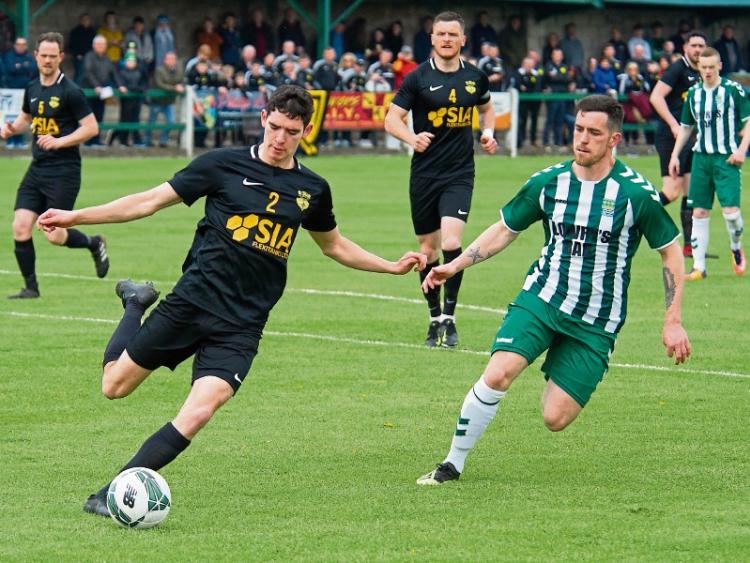 It is a rare enough occurrence but TSDL champions St Michael’s went down to their second defeat in a row when they exited the FAI Senior Cup on Saturday afternoon to Donegal side Glengad United. The visitors will have a bittersweet taste after their victory of course, as both sides were entered into this competition on the basis that they had won through to the semi-finals of the FAI Junior Cup, and in that game it was the home side who had prevailed. But nonetheless the two teams offered up an enthralling game for the supporters who made their way to Cooke Park on a wet August afternoon. The tone of the day was set early on when the Donegal side brought some good saves out of the home keeper Adrian Walsh, with both Stephen and Terrence Doherty going close. Glengad’s Christy Mc Laughlin also had a good chance just before the half hour mark but he shot wide from inside the area. The home side had a flurry of chances late in the half through David Slattery and John O Brien but ultimately the game was scoreless at half time.

Saints started the second period a bit better and David Slattery was again unlucky not to finish a Jimmy Carr assist after only two minutes of action. The game then settled back into a midfield battle with neither side really creating any clear cut chance as early season rustiness began to show. There was a major turning point twelve minutes from the end when Colin Bargary was dismissed for a second yellow card which turned the tide in Glengad's favour for the rest of the game. Christy Mc Laughlin delayed a shot on eighty six minutes as the visitors tried to press home their extra man advantage, but the home side held out.

Saints had to readjust with ten men but it was the Donegal side who sat deep of a largely uneventful first period of extra time. In the 112th minute Aido Walsh did well to save a Matthew Byrne free kick, and a minute later Conor Barrow turned well in the Saints area to shoot but Walsh again saved well. The home sides Olly O'Driscoll had two half chances late on, but eventually the game had to be decided by a penalty shootout. It was four each after the first ten kicks with Higgins, O'Brien, O'Driscoll and Slattery scoring for Saints, and the only miss coming from the normally deadly Jimmy Carr. McLaughlin, Byrne Ruddy and Byrne for Glengad with a miss from McKinney. In sudden death, Ryan, Kennedy and Armshaw scored for Saints as did McDaid, Barrow and McClure for Glengad, but finally Paul Breen missed and Doherty put Glengad into the last 16 on an 8-7 scoreline. The game will bring on Saints again for the big game in Galway as they begin to now really focus in on the big prize of the FAI Junior Cup final.