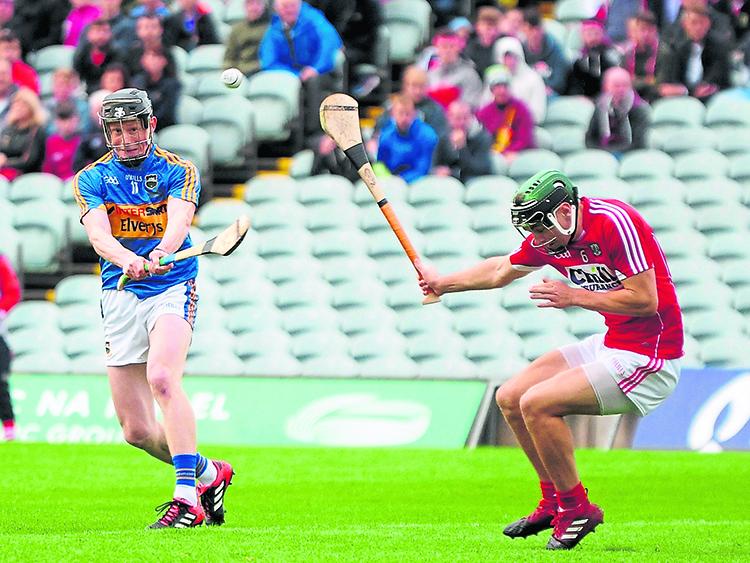 Jerome Cahill pictured in action against Cork during the 2018 All-Ireland under-21 final.

Kilruane MacDonagh's man Jerome Cahill is no fool: the rising Tipperary star is sensible enough to know that the nature of the Premier County's 8-16 to 1-15 Bord Gáis Energy All-Ireland Under-20 Hurling Championship semi-final win over Wexford did not replicate the challenge that the Munster champions are likely to face in the All-Ireland final against Cork on Saturday, August 24 at the LIT Gaelic Grounds in Limerick (6pm).

“I think that Wexford under-performed massively on the day and they are probably not as bad the scoreline reflected. I think that every time we decided to take on our man they seemed to wilt under the pressure that we were applying,” Jerome Cahill explained.

“We are expecting a completely different level of intensity and tackling (against Cork) - we know what Cork are going to bring and on top of that they have the motivation to bring it and to beat us,” the Kilruane man added before revealing that along with the motivation to beat Tipperary the Rebels also have the tools to do so.

“They have the players who can do serious damage - they have probably one of the best under-20 inside forward lines ever. So, it's really exciting to be part of games like that. And, I think that it is going to be great for us in the long run in terms of our development. You just learn so much from those games,” the trainee accountant told the Tipperary Star.

Cahill, and many of his under-20 colleagues, were taught a salutory lesson on the subject of counting chickens as recently as the 2018 Munster under-21 hurling final when the Rebels handed Tipperary their backsides (2-23 to 1-13). The Premier County did recover to edge their neighbours in the subsequent All-Ireland final (3-13 to 1-16), but the argument persists: in order to beat Cork in any match of significance you must do your work and do your work well.

“It is hard to believe how much things could change - that day was just a complete no show out of us. Probably our preparation going into the game wasn't where it needed to be. We just took so much out of that game - that was the main thing. And, we haven't looked back really since. So, hopefully we can just keep it going now,” Jerome Cahill said before name-checking his father, John, as a key influence on his hurling career.

“My father John would have had a massive part (to play) in my development and in developing my love for the game more than anything,” Jerome Cahill revealed.

“Then as I progressed through the ranks other club men like my uncle Jimmy and Christy Morgan, the father of Craig - there are so many stalwarts in Kilruane that you could not name them all. Then after that when I got to minor level Liam Cahill and Mikey Bevans - I have been under the guidance of them for the last four years and every year they never fail to bring something new to the table.

“I think their track record speaks for itself. With all of the teams that they have had they have been really competitive and we have added a bit of silverware as well so we are just really privileged in Tipperary to have such good men around us who know really what it takes to win. There is a Tipperary way of hurling as well and there is a culture there that we don't like to deviate from. So, that's very important as well,” Jerome Cahill added.