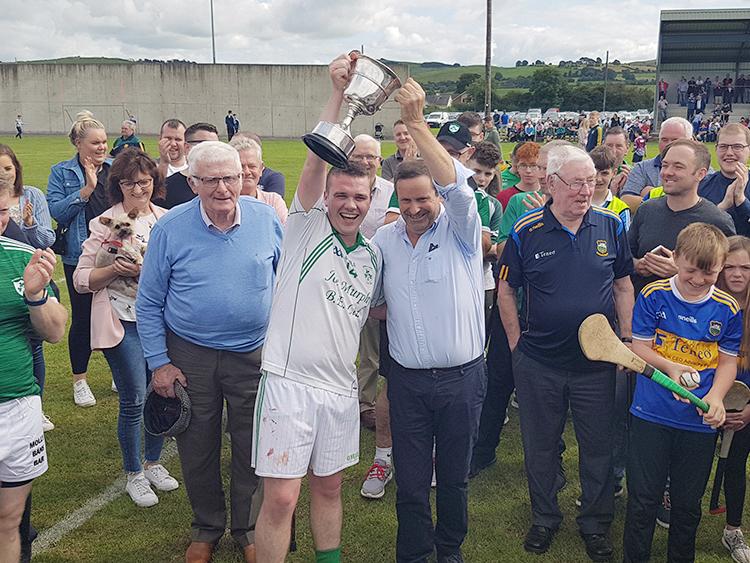 Borrisokane led this contest from start to finish and were worthy winners of this year’s North Tipperary Junior B Hurling Championship at Templederry on Sunday afternoon thanks to an accomplished display. Indeed, Borrisokane probably deserved to win this clash by a more significant margin since the ‘Mines struck for the only goal of the game right at the very death.

Silvermines were fancied to win the title having won the junior B league earlier this season and also featuring in last year’s championship decider, but Borrisokane played the better hurling for the most part and led by five (0-10 to 0-5) at the break.

Borrisokane streaked into a 0-4 to 0-2 lead inside the opening seven minutes when points from Andy Austin, Will Brooks (free), Liam Dooley and Gordon Harding presented their side with the initiative. Ciarán Timmons and Mark Daniels (free) responded for Silvermines and although another Daniels free closed the gap to one Borrisokane plundered five points without reply thereafter and led by six (0-9 to 0-3) with twenty-two minutes on the clock.

Liam Dooley (two), Brian Dooley, Seosamh Cleary (free) and Will Brooks (free) were responsible for these efforts while Ronan Murphy’s diagonal delivery into the hand of Liam Dooley for the corner-forward’s 17th minute strike was one of the game’s highlights.

Mark Daniels converted two late placed balls for the ‘Mines, but Borrisokane retired at the break in terrific spirits after Seosamh Cleary landed an eye-catching sideline to help his side toward a five-point interval lead (0-10 to 0-5).

Nine minutes elapsed in the second half before two Will Brooks frees left seven between them. The ‘Mines responded with a terrific Niall Curran long-range point in the 42nd minute and when Mark Daniels added a free soon after there were five between them entering the final quarter (0-12 to 0-7).

In order to rally Silvermines now needed to string a succession of scores together, but each time they reeled their opponents in with a score Borrisokane responded in kind.

The tit-for-tat nature of the final quarter featured scores from Will Brooks (four frees), Jack Sheehy (two) and Seán Spillane (two) to leave Borrisokane nursing a five-point advantage deep into second half injury time. Borrisokane full-back Kevin Gleeson had dominated at the edge of the square throughout this contest, but the ‘Mines did manage to plunder a goal in the 64th minute when an ambitious Daniel Ryan effort beat ‘keeper Davin Nevin after travelling through a crowd of players.